Recently, we had the fortune of catching up with of The 1975’s Matthew Healy at the band’s Manchester Ritz show to talk about what’s motivating him after having a number one album, and the band’s plans for the rest of 2013. 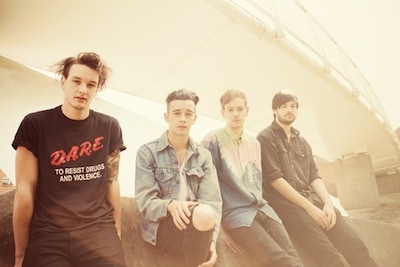 “This band is my only form of expression”

S] We first saw you guys headline Hull Freedom Festival a few weeks back. That was your first headlining set ever, how did it feel and what did it mean to you?

M] “That one was really special. I didn’t even realise how many people there were. I wear glasses, right? I never normally wear them on stage, and it never normally matters that much, but at that festival, about half way through the set I realised how far back in went, and it was just insane.”

S] How is it for you guys playing smaller cities like Hull, that don’t really get that much exposure to bigger bands?

M] “We’re not really that inspired or bothered about geography, we’ll go any play absolutely anywhere we think people are going to enjoy it and there will be a good crowd. We are from a small town in Cheshire, and there’s never any bands coming there, but if they did, we know that they’d be like-minded people. So yeah, we’ll play anywhere, man!”

S] How import are these near-hometown shows like this one for you?

M] “It’s really important. I haven’t really been back to Manchester this year – maybe once or twice, but we’ve been so busy. We’ve been on tour this whole time and tonight at The Ritz is one of the shows that I’ve been looking forward to most this year. We played The Deaf Institute last time we came here, and now we’re doing The Ritz! We came here for Dot to Dot Festival, but this is the first proper show of our own here, and it’s going to be a real homecoming I think.”

S] What’s your attitude to the idea that bands from smaller cities have to move to London to find exposure?

M] “I don’t think you need it, really. You need really good songs and you need a really concise vision. I think with the internet, now, geography and where a band’s from is totally obsolete. It doesn’t really matter. The way that our band broke was on the internet. We’ve lived in Cheshire our whole lives, we didn’t need to move. You don’t need to move anywhere to find success. If you’re in a band, then you just need to be good at what you do, and be patient, very patient.”

S] Outside of music, is there any literature or any films that you use for inspiration?

M] “The work of John Hughes [‘The Breakfast Club’, ‘Weird Science’ and ‘Sixteen Candles’] is a massive visual inspiration for us, and I think that kind of bleeds into the music. Our record is like the soundtrack to a John Hughes movie about our lives, you know? That was always the plan. I think it’s the whole Beat Generation, Jack Kerouac movement was really influential for me when I was about nineteen, maybe not so much anymore – I don’t have the aspirations to be quite so decadent as I’ve gotten older! But, that definitely bled into my attitude when I was writing a lot of the songs that made it it on to this record. A lot of those ideas go back about four years.”

S] How would you say that you personally have changed through the music that you’ve made over the years with The 1975?

M] “It’s my only form of expression, especially creative expression. It’s totally defined me, and I suppose, in a non-pretentious way, I’ve always used it to aid me. None of these songs [from the first record] were written when anybody new about our band. So, I’ve always been able to be as totally honest as possible and not worried about anything like, ‘am I being too honest?’ or ‘is this too much?’. I wasn’t harboured by any of these weird questions or connotations because people weren’t hearing the music. So, I’ve evolved into a person that I’m quite comfortable with now.”

S] And that comfort has come through the song-writing?

M] “Yeah, and I think the period when I wasn’t comfortable with myself is what’s been captured on record. I always question everything. Especially part of my identity. I’m quite an introspective person, and I think that will come through on the next record.”

S] So, on the new record there will be this theme of self-exploration?

S] Do you have a favourite place to write?

M] “It just has to be on the bus. I don’t have a house anymore. I just live on the bus. I’m going to get a place in December. It’s actually going to be in London. That’s because I am needing to be there now. I’ve got a lot of great friends and ties there. We’re also going to be working on other people’s records and stuff like that, so it’s cool. It’ll be good. I think we find inspiration from everywhere. It’s always come from a very personal perspective. It’s not necessarily about the places I’ve been. It’s always been about the way that I’ve felt, and the place will always frame it in my mind [when I write]. We’ve just had to really embrace this new dynamic that we have in the band now. We now have people listening to our music and knowing our songs. We are going through this constant human verification every day like, loads of people validating our presence, and that’s what’s defining the moment we’re in now, and I think that’s what’s inspiring the next record.”

S] What are your plans for the coming months?

M] “We’re on tour until December and then we’re going to be working on a girl’s record in December in my flat for like three weeks. Then we’ll be doing a Brixton Academy show and then on to Australia.”

S] What would be the Frankenstein’s monster for The 1975’s sound – the head of Michael Jackson and the arms of Glassjaw for example?

M] “I don’t know, I think that the idea with our band is to create uplifting music that leans a lot on syncopation, rhythm and lends from Black American music and pop music. But, there’s quite an underlying dour narrative, and I suppose there’s a more sinister undertone to it. I always say that my perfect song would sound like ‘I Wanna Dance With Somebody’ by Whitney Houston but convey the message and the conviction of Leonard Cohen on ‘Hallelujah’, y’know? That’s what I think.”

S] Obviously people talk about your high level supports with Muse and The Stones, but what’s been an uncrowned highlight of 2013 for you guys?

M] “We did Shepherd’s Bush Empire last night [Friday, September 20, 2013], and that was insane. This tour’s the first proper tour that we’ve been on. It’s really hard not to subserviate any of the moments, because you’ll ask me on one day and I’ll say one thing, and then I’ll think of something else! We’ve met so many great people. We’ve met so many of our heroes and played so many incredible shows. Leeds and Reading Festivals were incredible, because as a band we used to go to Leeds so much! Leeds Festival was a really big moment for us and there’s always such wonderful vibes there.”

The audio interview is here: