Since their foundation in 1999, Toronto’s The Birthday Massacre have gained a sturdy worldwide fanbase through their discography of four albums, two EPs and continued touring. Their most recent release, the ‘Imaginary Monsters’ EP, is an exploration of the childhood fears which often linger on into adulthood. We spoke to vocalist Chibi about the EP and the band’s future plans. 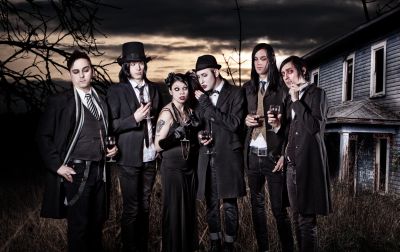 “I was never afraid of fictional monsters, I always kind of knew there was no such thing.”

S] Is there a concept, or concepts, behind the ‘Imaginary Monsters’ EP?

C] “This EP has served as a way for us to go back and work on a few songs we did not have time to complete for [fourth album] ‘Pins And Needles’, our last full-length release. So, it was a way to revisit songs that we were disappointed we did not get to finish. And also include a few remixes done by friends and musicians that we respect.”

S] Did you draw inspiration from your own back catalogue?

C] “The song ‘Forever’ was lyrically complete before the other originals were, and that song has a very emotional connection for me, and so when we began working on lyrics for the other two new songs, I’m sure those specific feelings I had were brought to them.”

S] And what about influences from other artists?

C] “Not specifically, for these three songs, no. I think they work well as an accessory to the songs on ‘Pins And Needles’, as they hearken back to that writing period.”

S] Do you have any plans to shoot promo videos for any of the tracks? How would you envisage a visual interpretation of the tracks?

C] “We’re always working on video ideas and concepts, whether or not we have the time or resources at that moment to bring them to fruition. I think there’s some strong imagery in ‘Burn Away’ – the lyric, “There’s a fire in the city of pictures,” has a strong visual association.”

S] The EP contains five remixes of tracks from your last album “Pins and Needles”. Was there a process involved in choosing who would remix what song?

C] “When we were talking to our friends who ended up remixing, we asked them what song they’d be interested in working on. Because of course you want them to have an inspiration, something that appeals to them about what they’re going to remix. If someone has an idea they’re excited about, it makes us excited to hear it.”

S] What’s your view on the mixes? Do you think they enhance the original songs?

C] “I think they morph the songs into something very unique. I mean, you have Andy from Combichrist really bringing out a strong dancy element, and you have Kevvy Mental and Dave Ogilvie bringing out a breathy and stripped-down element to the songs they worked on. Everyone put an interesting and different spin on the songs they chose.”

S] Will there be any forthcoming remixes of the new EP tracks? Are there any artists you’d welcome remixing these songs?

C] “I’m not sure. I think our focus now is going to be on starting on a new record, but if a cool remix opportunity comes up, of course we’d be excited for it.”

S] When you were younger, did you create your own imaginary monsters?

C] “I was never afraid of fictional monsters, I always kind of knew there was no such thing. What scared me the most as a kid were more “real life” dangers; like psycho killers and danger and kidnappings and stuff like that.”

S] How do you think they would fit with the sounds and images which the tracks on the EP evoke?

C] “For me, personally, the concept of “imaginary monsters”, in reference to this EP, means more a dwelling on the past and amplifying situations and emotions that end up limiting your ability to focus on the here and now and moving forward – like inner demons, and how overcoming these limitations you impose on yourself is difficult but important. Like, you beat yourself up over problems that seem impossible to change, but how real are they at this point in time? That’s my take, anyway.”

S] We believe you may be announcing tour dates. If you are able to, what can you tell us about how the plans for them are materialising?

C] “Yes, we’re going out in November with the band Dir En Grey. We’re still planning, but it’s getting closer. I’m trying to convince the guys to let me bring my dog along, but I think Rainbow is scared she’ll eat his makeup.”

S] Do you hope to include shows in the UK or Europe in the schedule?

C] “It would be ideal. We’re leaving that tour in December so that we can be at home for Christmas with our families, and then we’ll see what happens into the new year.”

S] What else can you tell us about expectant projects?

C] “We’re going to start a new record, and we’ve also been working on ideas for more video and art projects. It’s going to be a pretty busy year ahead.”

Our thanks to Chibi from The Birthday Massacre for taking the time to speak to us at Soundsphere.  You can visit the band’s website here.