After years of touring the world, three successful albums, with a fourth in progress (and a feature in Soundsphere magazine print issue two last year), we hoped that on meeting with Dave Best, bassist for Pigeon Detectives, he and his band hadn’t lost their signature Yorkshire charm. As we sat down with Dave in a chaotic backstage dressing room at the [W]elly Club in Hull at the beginning of their latest country-wide tour, we found out as much as we could about the next album, the group’s intense love for Yorkshire and.. err, their idea to give old women orgasms… 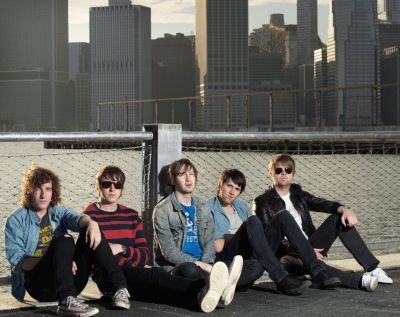 “There’s certain things you just miss about Yorkshire, like the teabags”

S] You’ve played a lot of festivals in the past, which do you have the best memories of?

D] “Glastonbury is one of the best memories, we were on the stage, the sun was going down, we were like second to last to play in 2008, that was great! Just the size of the crowd was amazing, but I still think Leeds and Reading was defining because we grew up going to Leeds Festival and the point at which we played it we were just on the up so we went out on to the stage, we hadn’t really looked before to see how big the crowd was, we just stepped out on to the stage and thought, ‘This is unbelievable!'”

S] Ah a new album, what’s that going to be called? Do we have a name yet?

D] “We actually don’t know what its going to be called yet. We’re just about to start thinking about titles now, but we always end up arguing for about three days about it and never come to an agreement, so it should be interesting!”

S] Who usually comes up with the final decision about album names?

D] “I think its just whose idea sticks, I thought it would be a good idea to name the album after one of the songs. I think the last album, ‘Up Guards And At ‘Em’ was Ollie [Main, guitar]’s idea. It’s the hardest when we haven’t chosen a track, because obviously the first album was named after a track and the last album was something a little bit random, but it has to go through a blender with all of us to get everyone’s ‘yes’ so it can take a bit of time.”

S] What was the last album about?

D] “It was just a quote from the Duke of Wellington, its kind of a positive statement for guitar bands to just kind of get on with it and make your music and if it’s good enough then people will still want to come and see you.”

S] You recorded the last album ‘Up Guards and At ‘Em’ in New York, was that much better than recording in Leeds?

D] “It was the best experience we’ve had as a band recording. When we first started, when we were 18, we just wanted to record in New York, like all our favourite bands, and we do have a lot of New York influences in our music anyway so we really wanted to go over there. To be over for nine weeks and live together in a tiny little flat in Manhattan, it was just unbelievable. We absolutely loved it! We loved it a little bit too much sometimes for a couple of weeks, where not a lot got done because we were out partying. I think the first couple of weeks we just kind of spent it as a lads holiday in New York!”

S] Could you see yourself ever moving there?

D] “We’d all love to live there. The problem is that everyone has got to go, because one of us just can’t get up and go, as it would be difficult to write and things but yeah I think most of us would like to live there. Except for Ryan [Wilson, guitar], he wouldn’t, Ry loves green countryside!”

S] Is he all about Yorkshire?

D] “Yeah, yeah, that’s it he’s a Yorkshire bloke through and through. He likes gravy and stuff like that. There’s certain things you just miss about Yorkshire, like the teabags, you have to hunt for about six months to try and find a decent cup of tea because in New York they leave teabags in and don’t put milk in and it’s really weak, awful tea that they have over there. We did find a deli that did Yorkshire tea though, and we went there literally every day because of the teabags.”

S] You’ve been on numerous UK, European and even Japanese tours. What do you miss the most about being away?

D] “It’s just the home comforts really! Just the little things, being in your own house, having your own space, watching TV, your own bed and your own food. Whatever town you’re in you’ve got to search for something you like and it can be a bit awkward. But, we love touring so it’s not often we get homesick. You only need like one day at home and then you’re ready to go back out!”

S] So would you like to tour all the time if you could?

D] “In 2007 and 2008 we pretty much did that! We toured constantly, we did all of the UK, America, Japan and Europe. We did everything like one after another. By early 2009, we wanted to kill each other. I mean we’re the closest of friends and we’ve known each other since we were like three years old, but when you live on a tour bus together with like 15 other blokes and after two years of doing it non-stop, we were just ready to kill each other and ourselves, so we took a bit of time off and I think that made us appreciate it more when we came back. If we’d have kept just doing that we would have gone insane, but we were kind of glad for the break. We do love touring!”

S] You did a charity single as well covering ‘Tainted love’, would you ever do that again? If so, what would you cover?

D] “Yeah, if the cause was right, and we could think of something good enough to cover. Now that Michael Jackson’s dead we could cover ‘Heal The World’ or the ‘Earth Song’. We’d have to do ‘Beat it’ wouldn’t we? That would be a good one to cover for cancer, ‘Beat Cancer’ as a charity single, it works! Then we could throw a big Van Halen guitar solo in with it!”

S] Something to think about! If you had to go to a festival and you were headlining, who would be your ultimate festival line-up (past or present)?

D] “The Beatles, it has got to be Beatles. Everyone always says the same, but it’s just true isn’t it? Led Zeppelin, Beastie Boys, Strokes, Blondie would all have been good to see in their hay-day! David Bowie, Joni Mitchell for like a mid-afternoon slot and Rufus Wainwright! Get ’em all in there!”

S] Would you ever consider collaborating with an artist that wasn’t in your genre?

D] “Yeah, it would be interesting to see a hip-hop take on one of our songs. I definitely think we’d be up for it! Maybe we could get involved with Daft Punk and do an ace remix? That would be awesome.”

S] So the album that your working on at the minute is actually your fourth album, hows the promotion for the third one going?

D] “It’s going well, so far, I mean it’s hard for guitar bands at the moment because the radio aren’t really playing any guitar bands but it’s gone well for us, the gigs are going well and the response to the last album has been great, so we will just keep ploughing forward as long as people keep coming to watch us!”

S] You’ve been on ‘Soccer AM’ four times now (which must be a record!), if you were invited onto ‘Dragons Den’, what would your product pitch be?

D] “We thought of an orgasm gun once! Years ago we came up with an invention, and it would be to just shoot someone and make them have an orgasm. We were younger when we said that by the way, seems a bit wrong now in our old age. We just thought it would be funny, someone just randomly walking down the street and we shoot them – they wouldn’t know where it came from. Old women would love it!”

S] Right! That’s everything we need to know, is there anything else you want to tell us?

D] “No, just that our new album should be out in the autumn and just to keep your eyes and ears open!”