At Groezrock 2013, we had an opportunity to chat with Bert McCracken (vocals) and Quinn Allman (guitar) of The Used about taking in the festival atmos, new material and feeling lucky. 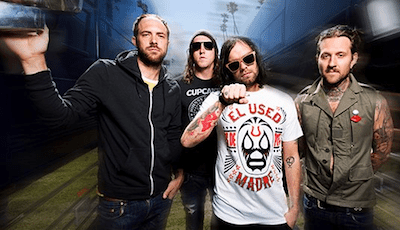 S] Hey guys! We’re here at Groezrock Festival, have you managed to check anyone out yet?

B] “We just got here literally twenty minutes ago. We flew in last night so we missed Texas Is The Reason yesterday, which we’re really upset about. They’re one of my favourite bands and biggest influences growing up.”

S] Do you think you’ll get chance to see anyone later?

B] “Yeah,we’re hopefully going to stick around for Killswitch. It’ll be cool to see some of our old friends. It’s just great being around the festival atmosphere. It’s like a high school reunion when you get to see people you haven’t seen in a while.”

Do you have any fond memories of festivals from before you were playing them?

B] “Me and Quinn went to Warped Tour together right as the band were starting to write songs, and I think that at that point in our career it was special for us at rock shows because we felt that they were kind of an inspiration and that were were facing the reality of getting to do what God made us to do. We’ve played so many festivals and the environments just seem so big and we see people that we’ve ran into over the years, it’s a lot more comfortable and fun now.”

S] What’s it like putting a setlist together for a festival? Is there less flexibility in which songs you can play than there would be at your own headline show?

B] “We just like to play what we’re feeling. We’re very conscious about what other people want to hear and for us that’s not an issue because we love to play some of our more popular songs, and the flow of our set always works well with those songs in there. We get to play a little bit of what we want and a little bit of what they want, which is also what we want. If they want it then it makes us want it more, which makes them want it even more. There’s a lot of want!”

S] So other than being in Europe for the start of festival season, what’s happening in the world of The Used right now?

Q] “We’re self-producing a new album right now in the States. We’ve been writing that, and we’re going to be playing Warped Tour this summer. We have a lot of plans for next year, we’re planning a big tour. We’ll probably be hitting the UK, but probably not before the end of this year…”

B] “…We might see you in the fall. We’ll see what happens. If you see us,we’ll see you.

S] Cool. Now, obviously you play in a lot of places around the world, so tell me something interesting about Belgium!

B] “Last night we drove through to the tip of the Netherlands and were kidnapped and held for ransom. The ransom was really cheap though, because the Belgian exchange rate is quite high we ended up paying less than we would have…”

B] “Yen to Euro is poor. Actually, my father in law is from here, and they’re German royalty. They’re owed a lot of money from the Swiss banks.”

S] Excellent. So between being held ransom and being related to royalty, what’s life like for rockstars such as yourselves when you’re not on the road?

B] “It’s not as wild as you might think. We’re pretty chilled. We all have families and that sort of stuff going on. A typical life in the day of Bert is: I get up, smoke a cigarette and then just read all day long. It’s like a constant weekend. When I call Quinn he’s usually just playing guitar or having dinner with his wife. Just regular life stuff. We’ve never really thought of ourselves as rockstars. I don’t even really know what it means.”

S] So life isn’t constantly like a Guns n Roses video then?

B] “No, we’re not pricks. We don’t have personal assistants. No one is really catering to us. We have to handle our own sh**…”

Q] “No one is going around passing us water.”

B] “No one ever brings us water! But yeah, we’re really laid back. We take music very seriously and the fact that it’s exploited so often by people who think that they have some status because they make music pi**es me off. We’re artists because we’re artists. If we were janitors we’d be janitors. We’re trying to put that out there, so that others do the same. We treat people the way that we want to be treated.”

S] Wise words. What advice would you give to any young bands starting out wanting to “make it”?

Q] “You need to define what ‘making it’ means, because if that means to make an album then you’ve made it, you know? That’s the first thing, making music that you like that’s yours. Just start there. When we made our first record we weren’t trying to make it, we were just making a bunch of songs that we thought were cool, and that just ended up being what was cool.”

B] “Our initial definition of success was quite vague. We thought that once we’d gotten onto Warped Tour that we had made it. It’s important not to set your standards too high.”

S] A lot of bands that started out at the same time as The Used have had their moment and then split up. What keeps you guys on the road?

B] “The honest love for music.”

Q] “The songwriting. I think there were a lot of bands that came around at the same time as us that are gone now because the songs weren’t there. They’ve got the riffs, the haircuts and the tattoos, but they don’t have the songs.”

B] “It really is all about the music and we have always believed that good music will be heard. If it wasn’t John Feldman that found us, I think somebody else would have because it’s honest and passionate. We’re not trying to be cool. We know how not cool we are.”

S] Finally, is there anything else you’d like to add?

B] “We feel very lucky, blessed, grateful, however you want to put it to still be doing this and to still have the amount of support that we do. There’s no way for us to possibly say thank you to our fans in words, so we’ll just keep making music.”