Forging enduring classics that motivate the masses has been the Holy Grail for bands throughout time, in an interview with Brad Walst, co-founder and bassist of Three Days Grace, Soundsphere uncovers the secrets to inspiring fans and producing the melodic gift that keeps on giving. 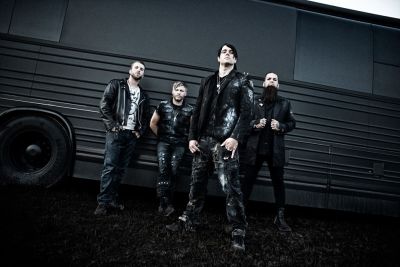 S] How does it feel to be back in the UK?

“We haven’t been here since 2004, it’s been ten years in the making – it’s one of those things where we’ve wanted to come but timing-wise and with records we just haven’t been able to make the trip. It’s pretty amazing the reaction from fans has been really great, we’re really excited you know, this is the highlight for sure. The last years have been really amazing, playing North America over-and-over but to get outside North America and to see some fans around the world is definitely amazing and something that we’ve wanted to do for a long time.”

S] How do you feel that you’ve changed personally through the music that you’ve made with Three Days Grace?

B] “I think that obviously in ten years things have changed, we’ve had a different line up for the band and the last couple of years have been a really amazing time for us. As a person you just learn certain things about yourself when you’re on the road for ten years. I think you go through different stages in your life and along with you evolving personally, your music evolves as well. We’ve definitely learned a lot in the last ten years about ourselves. We’re pretty much the same guys that we were, we’re still small town guys from Canada that love to play music so that’s one thing that hasn’t changed and I think that that’s what keeps us going.”

S] What kind of things outside of music inspires you?

“I think each of us have our own thing going; I know Neil always has some kind of project going. For me it’s just always writing and picking up guitar, just always creating. I’m into a lot of different kinds of theories, and sometimes you can get inspiration just from a movie or something. There are always inspirations and I think that that shows.”

S] In terms of painkiller, what inspired and motivated that track?

B] “‘Painkiller’ is about addiction to your computer or your phone, that drug or whatever that thing is that keeps you coming back for more and it’s written in the perspective of the thing that’s taunting you to come back and I think it can relate to anybody in day to day life. Painkiller is one of those songs that came very easily for us, it was an idea that happened very early on with the new line up, we actually went back with our old producer who did our first record and also had a huge part in ‘One-X’, for us that brought back that old school sound and the fans can really relate with that and love the new sound and the direction that we’re going.”

S] Was it something you always wanted to do, to inspire fans to push through any difficult times they were going through?

B] “For us it’s like therapy, we all have our personal issues that go on within our families and circles and lives in general and when we write about it, it helps us so when it helps us, it’s amazing that it relates to our fans and we always keep that in mind but it really is a personal thing to us, a thing that gets us through too. If we weren’t playing music, we’d be horribly miserable, so it’s definitely therapeutic and even today we were walking down Camden street and someone came up with a ‘One-X’ tattoo on their arm and he was freaking out and saying ‘if it wasn’t for you guys, I wouldn’t be here today’ and when you hear that it really hits home and makes creating really worthwhile.”

S] Would you say that ‘Painkiller’ is a good indication for fans of the future direction of where you guys are going?

B] “‘Painkiller’ is a great song to represent the new album, we have another song coming out called ‘I Am Machine’ that could possibly be a bit heavier than ‘Painkiller’, it’s definitely a heavier record both musically and lyrically, we’ve gone through a lot of things in the last few years and we’re definitely talking about it all on the record. I think people are really going to enjoy this record.”

S] How has the band dynamic changed and developed over the years?

B] “If anything I’d say that our dynamic right now is stronger than ever, in any kind of relationship it changes the way you look at things and right now we’re dynamically better than ever. We’re a family right, we’re brothers. My brothers actually in the band now, but my other brothers and my band mates, If there’s ever a problem it’s something that gets solved pretty quick, it’s not like we hold grudges or anything against each other. We’re a family and we treat each other with respect but after being on a bus for four weeks we can all sort of get on each other’s nerves just like a family member would. But we’re in a great spot right now and I’m really excited for the future.”

S] How do you look back on the success of those older tunes with your new album coming out?

B] “Over the last couple of years we’ve noticed almost a generation change, we’re seeing kids out there again, anywhere from ten years to seventeen years old and we’ve always had kids come out but it seems like there’s more and more and I think it’s almost a think where their parents have passed down Three Days Grace, they all relate to these songs, be they six, seven or eight years old and it’s pretty amazing to look back and think that these songs are still relevant with these kids. They come out and they know every word, it’s surreal. Every night we look out and they never fail to amaze me, that’s for sure.

S] Given that the band has become a role model for certain fans, what is the best piece of advice that you’ve ever received?

B] “Over the past five or six years, I’ve definitely battled with anxiety issues and I’ve been going by the model of just live, all I’ve got to do is breathe and I’m alright. Sometimes in this day and age, with all the distractions, you can lose yourself and not live in the present. For me, just live is a great model. It reminds me to stay in the present and that seems to get me through.”

S] What is your attitude towards Spotify and digital platforms?

B] “I know some people get upset about royalties for the artist but my philosophy is that those people will come to the show and become a fan and then they’re always going to be a fan. That’s more important for us, for people to come out and see us live because that’s our passion. Being a music fan, it’s funny as my computer just died and my laptop that had all my songs on it, and I thought, “What am I going to do? Then I realised that with things like Spotify I can just put in my favourite artists and all that they’ve done comes up. It’s definitely going to be the future.”