Two years ago, James Toseland’s career and life were all mapped out, as he enjoyed the spoils that come with being one of the country’s top professional motorcycle racers. Unfortunately fate is pesky little mistress and his career would be prematurely ended with one freak accident. With a new band, an album ready for launch, a new single ‘Renegade’ ready to be let loose upon your ears, and a tour about to get underway, we sat down with James to discuss why racing’s loss is alternative music’s gain. 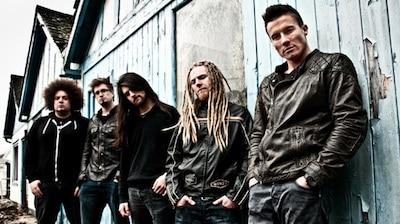 First up we asked the frontman of Toseland what it was that inspired him and got him out of bed when it came to starting his new career. “After being a professional sportsman and having to retire early through injury,” he begins, “I was in that space where I didn’t have anything to wake up for.

My sixteen year career, my life was completely mapped out and I didn’t really think of anything else. So the passion for the music side of it was to put all of my angst and energy into that, to see if I could put that into words.” Obviously such a dramatic event and shift in James’ circumstances has made quite an impact on everything he does, particularly in the creative sense, as he explains: “I didn’t realise it until after we’d finished the album and I listened to it back and looked at the song titles. It was obvious to see that it was a time in my life that I needed to write about.”

The first single off the upcoming album, ‘Renegade’ is a powerful tune, so we were keen to find out what it was in particular that inspired the track. “I was sat with Toby Jepson [The Virginmary’s, Saxon],” the affable gent replies. “I wrote with him throughout the whole album and he wanted to know who I was and what I was about before. ‘Renegade’ was a word I used to describe how I was as a Motorbike racer and as a musician. It’s the most personal song on the album. The opening line is: ‘brought up on the back streets of a northern English town,’ which I was. I was born in Doncaster and raised in Sheffield, so it was one of the most personal and also one of the first songs that we worked on.” While Soundsphere magazine covers global music for a global audience, we make no secret of our own heritage and focus upon spotlighting alternative culture in the north, so we wanted to know if it was important for James to continue to play in smaller venues in places like Hull and around Yorkshire despite having an album ready that could well send him around the world.

“The one thing I didn’t want to do was rely on my past reputation of who I was and who I used to be. I wanted to put my heart and soul into the music and then to see the reactions of people to see whether they could connect with the music or not in a natural way. It is a start-up band and that previous tour was our first one. I wanted to build things up in a natural way. I could have used my old career and got on TV and on a press tour early, but it would have been obvious to people that I was pulling on all that I had before to push my music. I didn’t want to be that way. I wanted people to connect to and accept the music for what it was first, and then they can talk about my history afterwards.”

With such a noble and deeply respectful approach to the music we asked the multitalented chap what have been the biggest challenges in building a reputation in this completely new career? “Standing at the bottom of a ladder again after having been at the top for so long,” he says honestly. “I want to be at the top again with this new career, but I know from being at the top how much dedication it takes. After the disappointment of my racing career ending, the biggest challenge is to find the energy and enthusiasm to start something else that could be a disappointment. But, you know, I’m a stubborn little git and I really feel like we’ve got something here, and then my brother in law, who’s a fabulous guitarist, came along and I asked him if he could get some guys together and I’m really proud to be able to stand on stage with them all.” With 10 years’ experience playing with a covers band, and having studied piano from a young age, James is certainly not a newcomer to music, but we were desperate to find out where he found his voice because that’s an element that, regardless of how much you might want to, you can’t always learn. “I remember exactly when it was,” he says without hesitation. “I wasn’t singing in the band but I was sat on an amp in the back of the van and ‘Sweet Child Of Mine’ came on and I was mimicking Axl Rose, and really just messing around. Then they opened up the van doors and my band mates said ‘we’re doing that tonight’.”

While the future is looking incredibly bright for the plucky northerner, the void left after having to give up something as adrenaline-pumping as high speed motor racing must be one hell of a gap, so we were curious to know if playing live music comes close to being able to fill the gap that’s been left by the untimely loss of his earlier career. “Yeah definitely,” he states emphatically without missing a beat. “Singing on stage with the band that I’ve got, playing your own material live rather than covers is a huge step up. I loved racing though and so I will always miss that, but I had to put it in a place where I could move on and I feel I’ve done that. I’m really excited about the tour we’ve got coming up now, 22 shows in 4 and a half weeks or so. I’m just amazingly privileged to be able to do something else that I’ve loved.” James is clearly a man passionate about what he does, and after a career of touring the world in the glamorous setting of professional sports we wondered if there’d been any notable moments on tour with a starting band, a setting that must be a million miles from all of that former glamour. “I’m the only one old enough to drive the van,” he laughs. “So I’ve been booking the hotels and checking the guys in. It’s been a big learning curve learning to actually manage and organise these things. We’re going to be losing money to do this tour with hiring vans and booking hotels, but we need this exposure to build the band so it’s necessary at this level.”

So what are James’ plans for 2014? “It’s going to be a busy year,” he begins. “The album comes out in March time and we want to get to SXSW festival in Texas next year. We would love to do Download Festival again next year, we did the acoustic tent this year.” He then leaves us with one final heart-stopping revelation too, as he says: “I’m also breaking the land speed record in America next year. I’m going to be the first person to go over 400mph on a motorcycle.” Clearly his need for speed hasn’t completely left him then, and 2014 is looking like a year where Toseland (the band and man) can end up back at the top of this new ladder.