In our latest interview, we had the chance to chat with Jimmy Jagger and Luis Felber from London punk band, Turbogeist before their show with Pure Love at The Duchess in York. After meeting the guys during their sound-check at the venue we ended up in the always great Nando’s to talk about their new EP and upcoming album, what is was like working with famous producer, Chris Sheldon (Foo Fighters, Feeder), and their thoughts on a punk revival. 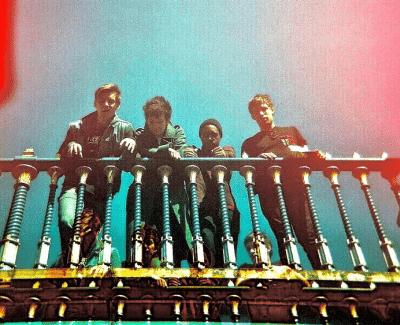 S] Have you always set out with the intention of wanting to make an album or was there a time when you thought you’d never get to this point?

J] “I don’t think we did. Me and Luis and Johnny started jamming just for fun.”

L] “I always wanted to make an album.”

L] “Yeah, we wanted to do an album. We want to make many albums.”

S] What was the inspiration behind the ‘Ancient Secrets’ EP because it seems to be different from most other punk albums out there.

J] “Well, I think that me and Luis are really into a lot of conspiracy culture and we read a lot of comic books and it was 2012 and there was all this talk of the end of the world and all this Mayan prophecy bullsh*t. It’s kind of tongue-in-cheek, ‘Ancient Secrets’. It’s not like we’re looking to share some ancient secrets about music or anything. Of all that sh*t that was going on, it was infecting our minds so it was what we were writing about in 2012. We were thinking a lot about bullsh*t prophecies and stuff. More than that there’s been a lot of natural disasters last year.”

L] “A lot of riots, and trainers stolen from JD sports.”

J] “It was all kicking off so it just felt like a good thing to write about. It’s hard coming up with a title for an EP, it’s tough.”

S] What was it like working with Chris Sheldon on the EP and how did that come about?

L] “Well basically we had a list of people’s names; some ridiculous, some friends, and then Chris is just one that I know seeing after what he’s done it sparked something in us and we really wanted to work with him. We’ve never been able to work with someone of that etiquette. He came to a lot of rehearsals and hung out with us and we got to know him.”

J] “It’s important that you have someone that’s into the record and into the band. It doesn’t matter how great a producer is, if they’re not into the music they won’t do a good job.”

L] “The EP went really well with him. He helped us with sounds as well, like I’ve never done nothing with stereo guitars before and both Me and Jimmy worked with that and that was awesome. And he made you feel relaxed when you’re singing which is important. He was just a cool guy to work with and loads of good experience and I really like ‘The Colours and Shapes’ by the Foo Fighters as well, that’s what made me really want to work with him.”

S] You guys were in Edinburgh last night and you’ve travelled all around the UK, do you find different atmospheres depending on where in the country you go?

L] “Definitely. Scottish people, they like to have a drink and there’s always a raucous atmosphere in Scotland and a lot of these shows have been 14 and over shows. People tend to go a bit madder the more north you get. In London where there’s more of a choice you get a lot of people watching, picking their nose, arms crossed. And accents change, you drive 50 miles and accents change, cultures are different. I guess it’s the same everywhere you go but we’re such a small island. I love travelling around the UK I just wish the weather was better.”

S] You guys have recently toured America. How would you compare the US audience to the UK audience?

J] “Well, I think there’s much more of a definite rock scene in the states, you know? There will be like a 50-year-old guy taking their kid to punk shows, it’s a pretty cool thing. I mean that happens a bit in England but not so much. England’s a bit sceney whereas there’s like lifelong rock fans in the states and they make up a majority of concert goers. In that respect it’s different but it’s different everywhere. It depends a lot when you’re playing a town on a Tuesday or playing a town on a Friday. It’s going to be a totally different ball game. Tuesday nights have been good to us lately.”

L] “Yeah I say every night in Glasgow, Edinburgh, Aberdeen, is gonna be good. Or even Dundee, I’ve never played there but I imagine it’s pretty good as well [laughing]. I think Scotland’s probably my favourite place to play actually.”

S] With that being said do you guys have a favourite venue to play?

J] “Actually Koko in Camden is probably one of the nicest venues we’ve ever played. It’s got the really old theatre vibe and it was an awesome show. And we used to go there as kids and go out to club nights there. It’s kind of a big deal to play that stage for me.”

J] “I used to go there when I was 14 and watch sh*tty indie bands and all sorts of DJs. So it’s nice to return; triumphant.”

S] What was the influence behind ‘Alien Girl’?

J] “Well, I don’t know, some things you’ve got to keep in your hat I guess. Let’s just say maybe I had some interracial love going on and it’s about dealing with the sort of difficulties of that. I still have alien love [laughing].”

J] “I think it goes in cycles. It’s a weird thing, when we were really little kids there was a revival. It was like Rancid and all those sort of pop punk bands, they were the mainstream in the States so Blink-182 was like a massive mainstream band, you wouldn’t even consider them alt rock, they were huge. So that was the last one I guess really. I guess there’s a lot of really cool garage rock coming through; The Man, Milk Music, The Spits, Pissed Jeans, lots of bands. I think people are getting open to it now. People are more accepting. I think the internet’s done that as well. People are no longer like ‘I’m a punk rocker, I’m a teddy boy, I’m a mod’. You got the internet so you got shuffle on your ipod and things like that, it’s a shuffle generation, the same kid that would enjoy going to see Laura Marling might enjoy going to see Bad Brains. It’s a weird wacky world we’re living in.”

S] Can you tell us when we can expect the new album?

L] “We thought the EP was coming out last year.”

J] “We’ve got an EP coming out on March 11 (Ancient Secrets EP). And we’ve got some remixes to do on the album so hopefully it will come out in the Fall.”