We have the chance to sit down with Tyler Joseph and Josh Dun, better known as Twenty One Pilots before their gig at The Cockpit in Leeds on February 22. We chat with the Ohio pair about the use of technology in their music, their increasingly loyal fan base and their plans for 2014. 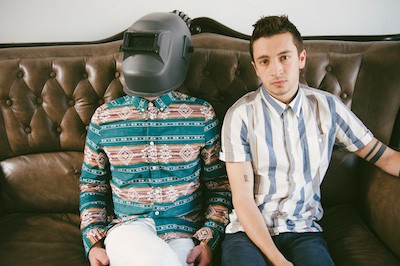 To start off the interview we ask how the band’s European tour had been going before their recent string of shows in the UK. Josh answers, “Tour’s good, we’ve been here for close to three weeks and it’s been fun to leave our home and go somewhere far away and be able to play music and have people be there. It’s pretty exciting, it’s cool just to get to do what you love.”

Drummer, Josh and vocalist and pianist, Tyler are becoming known throughout their fan base as pretty avid instagrammers and tweeters so we ask them to try to sum up each other in about one hundred and fifty characters or less. Josh describes Tyler using and articulate combination of food and apps. “If you were to take Fruit Ninja and Flappy Bird with a box of Hamburger Helper and mix that in with macaroni and cheese, that’s @tylerrjoseph.” After thanking Josh for the accurate description, Tyler comes up with a slightly more abstract answer, “Take a Red Bull fridge, remove all the red bull and put coffee in it. Because I really like Red Bull, but I really like Red Bull fridges even more. It’s from my perspective here, so when I look at Josh his outward appearance is exactly what I want to be, but what he has inside is a different soul completely, and I’m cool with my soul. So that’s why I feel like he’s a Red Bull fridge, but with coffee, because I don’t like coffee at all and actually I don’t even like Josh’s soul at all.” Both laugh before Josh calls Tyler out on going well over the character limit.

Josh talks to us about the band’s past experiences in the UK. “We were here a few months ago and we headlined in three or four cities, but a lot of it’s been mostly festivals and some club shows. This is kind of our second time, but it feels a little more legitimate this time around.” After asking what the biggest differences were for the band between their visits to the UK, Tyler promptly answers with, “A bus…” Josh laughs and continues, “Yeah, we’re on a bus this time. In the States when we were starting out, the goal was to go into a place where nobody knew who we were and to leave there with everybody knowing who we were and go back with those same people coming and bringing their friends and developing different parts of that state or country who know who we are and creating something out of that. Coming to the UK the first time felt like we were going back to that point, where we were in the States in the beginning and so now that we’re here again for a second or even third time over here in the UK it feels like that’s beginning to blossom a little bit. It’s kind of cool to see.”

twenty one pilots created their incredibly loyal fan base, affectionately known as the “skeleton clique” in reference to the masks that the duo wear on stage, by sticking to their hometown in the beginning rather than moving to Los Angeles or pursuing a record label like other artists today. We ask Tyler how important they thought that was to their success. “It was really important for us to play around our hometown of Columbus, Ohio and build up a fan base that way. We’ve seen other musicians that have said, ‘Oh I don’t ever play in my hometown’ but to us that’s the most important thing. We love our hometown and it’s really important to get them to like you first. Then you can move onto other places, like England, and get them to like you.”

The band’s unique sound, ranging in everything from electronica to hip-hop to alternative has played a vital role in their success and exposure as well as the popularity of their live performances. Tyler explains the benefits of incorporating technology with traditional instruments such as piano, ukulele and drums. “It’s nice to have just the two of us and not a lot of guys in the band. Our bass player is a computer and he’s really nice. He doesn’t have a girlfriend and there’s no drama. We came up with all of the sounds and we spent so much time creating them so we know exactly what goes into our backing track. I’m not a very impressive piano player so we need the other sounds to cover that.” Josh adds, “You impress me.” But with the positives of using technology in music there are always negatives, so we ask the band if their backing track has ever failed them at any point. Both laugh and Tyler responds by getting a can of Red Bull to answer the question. Josh explains, “Yeah there have been plenty of times where something has gone wrong. We’ve gotten to the point where we don’t rely on the technology because we’ve done it so many times’. Tyler adds, ‘Josh and I can just look at each other if something goes wrong and know where to take it from there.”

The band’s motley style of music has often been referred to by fans as ‘schizophrenic pop’, partly because of the deeply personal nature of some of the lyrics. Some fans of the band have even posted testimonies on social networking sites about how their music has saved lives so we ask Tyler, the lyricist of the band, how he reacts to the responses to his lyrics. “We try to remove ourselves from that and make it just the music and the lyrics that speak to people, that’s a big reason why we wear the skeleton masks during our performances, we want people to respond to the music and take us out of it. It’s important that the music speaks for itself and we just deliver that message to the audience. But you’ll always have like twenty stories a night of how what you’ve done has changed or saved a life and it’s a big responsibility. But that’s really why we do this, if our music affects somebody in a positive way then we’ve done what we came to do.”

After touring in the US, Australia and Europe the band has spent a lot of time on the road promoting their most recent album, ‘Vessel’. We ask the guys what they do on tour that influences them and keeps them going. Tyler tells us, “I’m very competitive with everything so that keeps me going. I’m competitive sometimes to a fault, we play Yahtzee on tour or video games and I always have to win. My family is very competitive so that’s just how I grew up.” Josh explains his interests while on tour. ‘Tyler and I are very similar in a lot of ways but very different too, I’m more of an introvert. I’m not very competitive at all, I think I just prefer to be alone or go for a walk just to be by myself.”

Finally the guys open up to us about their plans for 2014. Tyler tells us, “More touring, we’re finishing our UK tour, then starting our North American tour in April. We’re just constantly touring, our Moms weren’t very happy about that when we told them. Our last album, ‘Vessel’, has been out for over a year now so we’re looking forward to putting the next one out!”