In our latest interview, we talk to Luke Boerdam, guitarist and vocalist for Aussie grunge standouts Violent Soho about new material, touring with Yorkshire’s finest, Arctic Monkeys, their favourite London spots, as well as their own plans for 2013. 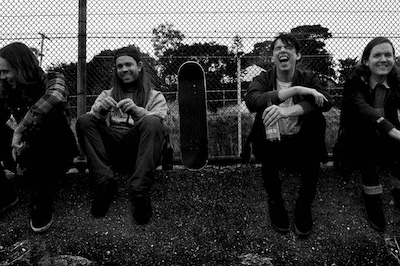 S] ‘Neighbour Neighbour’ is a storming track. Excellent. What were the inspirations behind that one?

L] “In my old house, we had a bad Neighbour who lost it one night when we were making too much noise. He tried to punch my female room-mate. The song doesn’t exactly explain the whole story – but that was the initial inspiration.”

S] Do you have plans for a UK tour?

L] “We’ve got nothing in writing as of yet. We were there end of 2011 for ATP festival. We had an incredible time, and now we are always keen to head back to the UK!”

S] Do you have anywhere you particularly enjoy visiting over here?

L] “I think that a personal favourite for me has got to be the Tate Modern. A gallery of that size, with a collection that good doesn’t exits down here in Oz. The band always heads into that area when we are in London and usually find some really old bars as well. Then there is Brick Lane and Rough Trade Records. It’s a must every time we stop in. They always have an incredible collection and some good in-stores happening!”

S] What did you learn from Arctic Monkeys tour last year?

L] “We learned how to tour well. They have a road travel case with a TV and Playstation3 built into it. Every stop at every venue, they simply wheel out this giant box, open it up and start playing FIFA. If Violent Soho ever got to that size it would be top of the shopping list. Incredible!”

S] Are there any other bands you think we should be checking out?

L] “There are a few! Cloud Nothings, Jeff the Brotherhood, DZ Deathrays and Eagle and the Worm!”

L] “With ‘Jesus Stole My Girlfriend’, I was engaged to girl and we broke up over religion. It’s as simple as that. With ‘Muscle Junkie’, isn’t it obvious? It’s about dudes who care too much about ego and their muscles, which in general, means they don’t care enough about stuff that matters.”

S] How do you feel the band have moved forward and developed as a band since the release of your debut?

L] “We’ve done some good stuff. We’ve toured with some awesome American bands – The Bronx, Built to Spill, Dinosaur Jr – you can’t help to take on a whole new range of influences. I think it’s really driven us to perform and write better and set a higher standard. When we first started out we never had a chance to question our own songs or what we were doing, because we were always so busy touring. But now with a break we’ve had a chance to pause and focus on new material and work out what we want to do. I think the band is more mature now, and it’s gonna show on our next album.”

S] Is there a newer song that you’re working on right now, that you feel like perfectly defines where the band is at, musically?

L] “We are always working on new stuff, but I think one of our latest singles – ‘Tinderbox’ is generally where the band is headed and where we want to be musically.”

S] “What do you think it is about Australia that seems to produce such good quality alt-rock sounds? We also enjoy a bit of Silverchair and Grinspoon!”

S] What does the term “stoner pop” mean to you?

L] “It’s pop music that sounds really good shown stoned. Stuff you can head-bang too, either slow and heavy, or fast and driven. But in the end, it’s just a few chords with a strong melody. I like to think of it as Weezer with a heavy blanket thrown over it!”

S] What are your main plans for this year?