After seeing the band perform live at Knebworth for Sonisphere a couple of weeks ago, we wanted to catch up with Danish rockabilly sensations Volbeat (through vocalist Michael Poulsen) to talk about performing in the morning, and plans for the rest of this year. 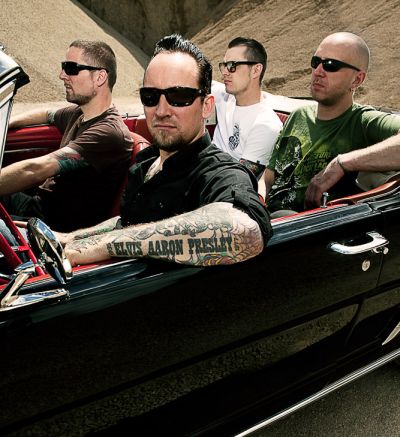 “I really enjoy being on stage and connecting with fans”

S] How was Sonisphere for you at Knebworth?

Michael] “That was very early. [laughs] Never tried to play a live show at 10:45am. We woke up in the tour bus, and our tour manager said, ‘There’s one hour and 30 minutes to stage time!’ [laughs] but it was amazing to see that so many people showed up that early, we’re really thankful for that – great support from the audience. There were a lot of problems about booking the show and about people keeping their words to the contract, but I will not use any more negative energy on that. We were supposed to be on at 11:00am, and then only play 30 minutes, but we went on 15 minutes earlier so the fans could get 45 minutes.”

S] You seem to have a very positive relationship with your fanbase, so what do you most enjoy about that element of live performance in contrast to simply working in the studio?

Michael] “I would always rather be on stage and connecting with the fans. But you have to remember, without being in the studio, there would be no songs to play for them! [laughs] In the studio you’re again together with the band, as in the tour bus and on and on. But the live shows, there will always be new people, and fans you haven’t seen for a long time, so that’s always great.”

Michael] “Touring. We have a seven week tour coming up in the USA, and then touring again in Europe. Then a live DVD should see the light at the end of October 2011. So lots of promo work!”

S] Where does lyrical inspiration come for Volbeat when writing the storyline that is constant through your albums – does it come from a specific location (can you be out walking, or watching TV for example?

Michael] “It just seems that my mind is working non-stop, and that’s good, but actually also a pain in the ass! But it can come from every corner of the world, or every corner in my mind. I always write lyrics as the last thing to a song. So, I always improvise words when I’m writing the music. When I have the music and the melody in the vocals, I start putting words into it.”

S] What kinds of ideas are inspiring you most at this moment?

Michael] [Pause] “I really don’t know, it’s not that easy to put in to words. Because inspiration is such a crazy process, where your mind sometimes flies away, and when it comes back, you don’t know where you’ve been. And hey I’m not doing drugs here! [laughs] Sometimes you are aware of where you got it from and other times you just don’t know. And my ideas can change from one hour to another.”

S] What are you most looking forward to about the upcoming US tour – you’ve been doing a lot of dates there recently?

Michael] “Well, just to get back there! I love touring the US. And the fans a really great. They have the Volbeat fever right now, just like when it exploded in Europe, so the process is really interesting. It’s like going back and experiencing it again. It’s going to be great to connect with the fans again and play our asses off.”

S] How do you feel that you have developed personally through the music you’ve made as Volbeat since the project began, until now?

Michael] “Tough question – ask my mum or wife! [laughs] I feel I’m the same, I know I am. But you learn a lot being away from home so much as we are. You become aware of how fast time gos by, and we’re only here on a short notice. So, you just want to use your time the right way and be a good person, and not waste it on the wrong people, which sometimes can be difficult in this business.”

S] There seems to be a lot of effort put into the cartoon-style cover art of Volbeat – where does that come from and who designs it?

Michael] “I write all music and lyrics, and I also do create the cover style in my mind, so I always have pictures flying around in my head, just as the music. I go to a friend of mine called Carsten Sand, and I show him with some few drawing lines what I’m thinking of, and sometimes just by talking he knows what I’m searching for. He’s very talented, and we have worked with him on the last two records.”

S] If you could remove the soundtrack from an existing film and replace it with Volbeat’s music, what film would you pick and why?

Michael] “I’m not sure, maybe Raging bull, or a Tarantino movie!”

S] You’re back here soon as well in October – what’s your message for the UK fans?