Interview: We Are Scientists

Home » Interview: We Are Scientists

In our next interview, we have a natter with Keith Murray from We Are Scientists about the band’s brand new album, ‘TV en Francais’, and reflect a little bit about the past. 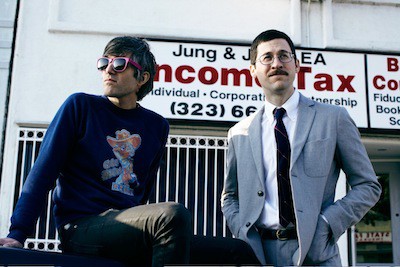 S] Firstly, thanks for taking the time to answer these – what are you up to right now?

K] “I’m lying in my bed in Brooklyn, New York, doing my best to ignore the raging snowstorm outside my window. We’re supposed to get something like 10″ of snow today, or something disgusting like that.”

S] How would you say that you’ve changed and developed through the music that you’ve made as We Are Scientists, from the start of your careers up until this point?

K] “Well, we still spend most of our time and creative energy chasing the biggest melodic hooks possible. I’m the sort of jerk who can’t really connect to music, not matter how atmospherically compelling or sonically appealing, unless there are some catchy hooks involved. That said, on this album, we’ve allowed ourselves to rely more on the songs themselves, rather than fast tempos and bouncy beats. This is our strongest and most varied collection of songs, and I think we were able to deliver it because our confidence as songwriters is strong enough, now, that we’re no longer mainly worried about whether people can leap around to our songs.”

S] Talk us through the main inspirations behind, ‘TV en Francais’ on the whole?

K] “This album was less directly influenced by other bands than any of our other, earlier records, I think. I can’t really pin down any one, overriding influence, to be honest. There are bits of 90s alt rock, Simon and Garfunkel harmonies, glam metal, some of the Walkmen’s first album, The Jesus And Mary Chain…all kinds of weird combinations. I think it just kind of sounds like us.”

S] What about the main lyrical ideas behind ‘Make It Easy’ – where did that track come from?

K] “More than ever before, I tried to write some straightforward love songs on this record, but it never quite worked out. ‘Make It Easy’ is a bit of an exercise in wishful thinking. I wanted the verses to be nothing but earnest celebration of a person, with the choruses indulging in the sort of equivocating that I’m guilty of falling into pretty often. I guess it’s simply a human love song. It’s not sappy, that’s for sure.”

S] Outside of music, what types of things keep you motivated and inspired – movies or locations for example?

K] “I think living in New York City is a real inspiration. Every day, people here are creating incredible work, moving their art and industry forward, exploring and expanding and experimenting. It can be pretty exhausting, to be honest, but it’s nice to always feel like there’s a bit of catching up to do. It’s an exciting place to live.”

S] How do you look back on the success of ‘With Love And Squalor’ and songs like ‘Nobody Move…’ now in 2014?

K] “It was a really fun time, and it was incredible to watch that album, which we wrote in a nasty Brooklyn rehearsal room and recorded with our own money in a barely-functioning studio, turn into a Gold-certified career-maker.  I can’t say it’s my favourite album of ours, but it will always have a special place in my heart for having gotten things started for us.”