In our time at the mighty Slam Dunk North, we got to sit down and have a quick chat with Coley O’Toole and Travis Clark of Florida pop-rock band, We The Kings. In our short time with them, the guys talked to us about their time in the UK so far, their experiences in the UK as an American band, and their thoughts on social media in the music industry. 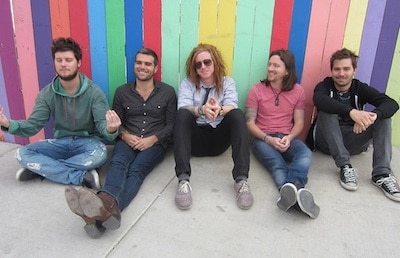 S] Hey guys! How’s the day been going so far?

T] [Laughs] “Let them have it! Let’s take you back two days. He [Coley] lost everything he had on Delta.”

C] “It all starts with a pilot coming over the intercom and going ‘[sighs] Well folks…’ That’s when you know shit has hit the fan.”

T] “So he took four shots of vodka, three shots of whiskey and two shots of tequila and about fourteen hours later he lands in London; no luggage, no gear.”

C] “I left my passport at the airport.”

T] “And most importantly, no shoes.”

T] “He’s miserable right now and to make matters worse, we’re playing at Leeds University and there’s an H&M down the road that he walked to in the rain. And it’s only female clothes there [laughs]. So he walked all the way in the rain to get dry clothes only to have to walk back in the rain.”

C] “So what he’s saying is that I’m afraid of the next five hours.”

S] Have you got any favorite places to play in the UK?

T] “Well we do have an emotional attachment to Leeds because this was our first gig ever in the UK, ever overseas actually, and it was at Slam Dunk Festival five or six years ago. We showed up in our van and people from thousands of miles away knew our music. The goal of this whole thing is to spread your music as far and as vast as it can possibly go so Leeds is obviously very important to us. We’ve had some of our biggest shows ever in London, which is incredible. As an American band, it doesn’t matter where you play because you’re so far away. We don’t feel that North/South divide or even a divide from Scotland to Wales to England other than the accents. So for us it’s incredible, we love every show we’ve ever done over here.”

C] “The crowds are intense over here. UK fans are great.”

T] “It’s maybe because they have to wait in the rain and they’re just so excited to not be in the rain anymore so they just go crazy.”

S] What do you think about the introduction of social media and social networking in the music industry, allowing fans and artists to interact?

C] “I think there’s good and bad to it. There’s great to it, it gets artists out there. Artists can actually control their own PR now. But I think there’s also a demand on the fans’ side now. They want so much, it kind of, in my opinion, ruins the rock star in some cases. You just want to know too much, there’s no wonder anymore. When he walks out on stage you now know like, what his kitchen looks like. When I was a kid I used to think they just disappeared back into the sky.”

T] “I think we’ve embraced it as far as We The Kings go, but Coley’s right. I have more followers than Billy Joe Armstrong on Twitter, so people look at that stat and go ‘Woah, Travis must be huge’ and in all honesty and reality, the lead singer of Green Day is much larger than I am. We embrace the social media because we love keeping in contact with our fans. We don’t do it as a means of becoming larger. It’s less of a promotion for us than it is ‘thank you guys for the support, we love you, let’s keep in contact, if you want to know about shows, we’re playing shows here’. We love it, but it is definitely a huge twist on the music industry.”