“Twenty years is a long time but it still feels fresh to me,” – this was the overarching message when Soundsphere spoke to Patrick Wilson, Weezer’s witty drummer and guitarist last month. We seized at the chance to speak to Pat about Weezer, their enduring career and his side-project The Special Goodness. 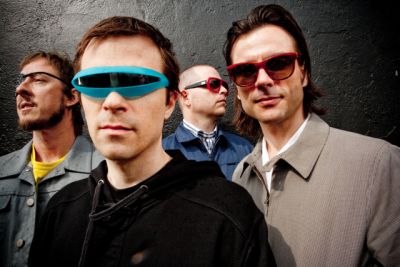 Despite celebrating twenty years with Weezer, Pat Wilson still seems as enthusiastic as ever about making music. Focusing this side of 2012 on his work with The Special Goodness, his passion is infectious: “Music is as much as a mystery and a joy as it’s ever been and I’ve spent the last two months working on The Special Goodness record and it’s literally blown my mind how much fun it is to make music.”

And it certainly shows. One of the attributes of Weezer’s career in recent years is how incredibly prolific and productive they have continued to be; constantly surpassing their contemporaries with the volume of music they produce and release: “I think if you’re a band for twenty years you go through different cycles and philosophies of how to make and release music,” Wilson explains, “and it seems like at a point around 2008, we wanted to bang out a couple of records pretty quick!”

It also appears generally that Wilson’s spirit is with the creation of the sound rather the writing which traditionally is laid with vocalist and guitarist Rivers Cuomo: “In my heart I’m kind of a music geek so I get excited about actually playing instruments and recording them and how it sounds and how it makes me feel.” Wilson elaborates, “Interestingly, I don’t really get that excited about writing songs… I remember once David Byrne [from Talking Heads] had a great quote, he said ‘Lyrics are a way to get people to listen to your music’ and that’s how I feel – I’m just into the music.

“My favourite thing to do is if we all get in a room and work together, that’s when Weezer does its best work” Wilson tells us. “The most recent example of that probably was when we covered Radiohead’s ‘Paranoid Android’ in the studio! It’d been a long time since we’d played together and it made me realise that’s where the value is when all four of us feel good about what we’re doing.” Wilson also touches on Weezer’s latest album ‘Death To False Metal’, a compilation of re-recorded versions of unused songs throughout their career so far that was released in 2010: “It’s a bizarre collection of the past… if you’re around this long you might have a lot of stuff you want to share with people, but it’s crazy to hear all that work from back in the day.”

Reflecting on his own writing achievements with the band, and specifically songs from their début self-titled album, ‘My Name is Jonas’, ‘The World Has Turned And Left Me Here’ and ‘Surf Wax America’ evoke special memories: “I remember I had a 4-track, I put all the music down and gave it to Rivers… but to me that was a fun way to work, as I was just going ‘Here you go, here’s a bunch of music; I like the way it sounds, you should sing on it’. To me that’s one of the best collaborations we ever did, I love that song [‘My Name Is Jonas’].”

Since 1996, Patrick Wilson has also been associated with his own project The Special Goodness (named after the way Wilson describes his feelings whilst making music). With Weezer taking a short break, Wilson’s attention has been focused once again on his own musical schemes, taking up writing and the majority of the instrumental responsibilities. Remarking on the recording process, Wilson admitted it could sometimes be challenging: “I’ve had to ‘fire’ myself several times as the musician on the record and then re-hire myself when I had a better attitude! Since I approach everything with each instrument, it’s almost like I had to learn to tell each of those personalities, ‘Hey, stop shredding and just play the song!’ laughs Wilson. “It’s been a pretty schizophrenic experience, wearing every hat from engineer to every other person in the band. I’m really excited about the way it came out… it’s pretty sick and bitchin’!” Ten tracks have been prepared for the upcoming Special Goodness album and are currently in the process of being mixed (“That’s a whole other conversation!” Wilson joked). The multi-instrumentalist also teased about the possibility of simply releasing the album solely online but concluded enigmatically, “People like having CDs so I’ll probably make a bunch but… we’ll see!”

‘Life Goes By’ is a stand-out track by TSG, and it represents the eclectic revolving door of influences Wilson continues to appreciate: “I love ‘Life Goes By’…that kinda started ‘cause I went through a mad Talk Talk phase where I would listen to nothing but the albums ‘Spirit Of Eden’ and ‘Laughing Stock’ and somehow that Special Goodness song was written with that in mind… it sounds nothing like Talk Talk but I was inspired by those records to write that song.” But in terms of the new record, what can we expect to hear? “There’s one guitar, a synth, bass and some filthy sounding drums – all are being played so it’s not like dubstep or anything programmed. But it does sound dirty in a way that I really dig.”

Talk moves on to touring and Wilson speaks warmly of his time spent touring in the UK, mentioning especially Newcastle, Manchester and Leeds. No plans have been made for The Special Goodness to extensively tour, but perhaps Weezer will be jumping on the tour bus soon to a club near you: “I actually think big clubs are the best places to be in as a band, they feel intimate and kinda closer to you rather than being in a giant place where people feel kinda far away. But we’ll see how it goes!”

A trademark of Weezer’s time on the rock scene has been their infectious wit and humour which is always interlinked with their music, be it in their inventive music videos or live performances. Wilson puts it down to always being able to find the entertaining side to what he loves doing the most: “I’m just always amazed that people want to hear us do what we do, so it’s a bit of a laugh for me! I just try to look at every day as a way to have fun and luckily we’ve been able to do it for so long it just keeps getting more fun!”

And finally, any advice for those wishing to follow in the mighty rock footsteps of Pat Wilson and Weezer? “With me, I’ve known my whole life that it’s my favourite thing to do… but my advice would be if you’ve got that love and you’ve got that drive, stick with it ‘cause it shows and people can tell. Live your dreams. It sounds like a cliché but, life is short.”

For more information visit the official Weezer and The Special Goodness websites.