In our latest interview, Zico Chain’s Chris Glithero talks us through the last (very tough) couple of years for his band following their departure from the music industry, and how they rose to the challenge to return, and come up with what is possibly their most exciting, innovative and honest album to-date, ‘The Devil In Your Heart’. 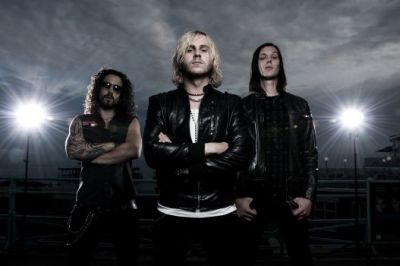 “The album was inspired by our unbearable situation”

CG] “Amazing thanks! Every night’s been bouncing. I got sick for the first few days, but we still managed to give it our all and put on a good show. We like to make sure everyone leaves with a smile.”

S] Talk to us about the inspirations and ideas behind the new album, ‘The Devil in Your Heart’?

CG] “I think the album was inspired by our unbearable situation. We were skint and we were bedding down in a warehouse with no heating for nearly two years. It was a pretty low point for us. We eventually decided enough is enough, sacked our management and said let’s make a record. Soon we were recording an orchestra! We’re pretty good at making things happen when we put our minds to it.”

S] Who is “the devil in your heart”, and where does that come from?

CG] “‘The Devil In Your Heart’ is the things we are born into. The beliefs, religions, morals and political persuasions that we are spoon fed from the day we are born. It seems ridiculous to me that we still live in a world where we force our children to sing about God in school, and we believe that we have the correct way of life mapped out for everyone. I realised when I was in my mid-twenties that the things I valued in life were all wrong, and were the sole cause of my unhappiness. I believe that the only thing we need to teach our children is that they can be happy with absolutely nothing. Then everything else is a bonus. We’re all driven by desires and the need to succeed, and I think on some level you can lose focus on yourself, and your day-to-day existence. For me, ‘The Devil In Your Heart’ was my awakening. It was the turning point in my life when I learnt to enjoy the simple things, and acknowledge that most of what we are taught to believe is bulls***.”

S] How do you feel that you have changed and progressed as musicians since the making of ‘Food’?

CG] “We learned to break our own rules on this album. We had no label, no producer, and no pressure to do anything other than what we wanted to do. We had no idea what we wanted these songs to sound like, so we just built on our ideas and experimented in where we could take them. It was a liberating experience as a musician to feel so free with the music. We really had lost everything, and we had no expectations for the album other than wanting to get these songs and ideas out of our system. With regards to our developments as musicians, I think the music speaks for itself. We used string sections and experimented with samples and harmonies. I’ll always love ‘Food’. It was a great album and took us to places that we never dreamed we’d go. But this album is in a different league. We’re incredibly proud of how it has turned out.”

S] In our last interview which took place in Hull a few years ago, you documented the challenges you had staying together as a band – are those “ghosts” still there in anyway?

CG] “I think we all realised after we left Hassle records that rejecting the band as a part of our lives simply made us all miserable. We ignored Zico Chain for nearly two years and I think each of us would tell you that this period was the lowest point in our entire existences. Zico Chain is our outlet and our passion, and for good or for bad we are all in it for the long haul.”

S] You’ve just signed with Suburban Records, so what’ve you learned from your dealings with Hassle that you can take forward this time?

CG] “Hassle was and still is a great label. It just wasn’t a good time for the industry when we left. We learnt how the music industry works from the guys at Hassle, and we still bother them for advice every now and then. In fact, it was Chris Baker from Hassle that put me in touch with Suburban. I’d like to sell out some stadiums and sell a few million copies of ‘Food’ for those guys.”

S] You’ve been working on a video tour diary – how necessary (and fun) are they for you to do?

CG] “We struggle with them if we’re honest! I think we need a camera man. The tour consists of the three of us fu**ing around most of the time, along with ‘Slay’ our technician. If someone is holding a camera it seriously upsets the balance of things. We’re trying to get better at it. We usually miss all the good stuff as we’re rolling around on the floor laughing. There is lots of laughter on a Zico Chain tour we need a fly on the wall documentary.”
S] You use electronics on some songs on the new record; why did you choose to mix up more sounds – you goin’ dubstep?

CG] “[Laughs] No, but I wouldn’t rule it out. We’re into all styles of music and from here on, we’ll follow our ideas wherever they take us. I met Skrillex at Creamfields when I was working for Katy B. He was a really nice dude and I have massive respect for what he’s doing. Like I said earlier, we had no rules on this album. We just went with whatever we felt sounded good and felt right. For this reason I’m glad we don’t own an accordion or some bagpipes, things could have gotten messy!”

S] A few years back you did some well-attended shows with Disturbed – what are your best memories from those?

CG] “That whole tour was just amazing! We were so ‘green’. We had to drink lots just to get on stage. We had literally flown back from LA where we’d just made ‘Food’. We jumped in the van and set off to play arena shows to 8,000 or 10,000 people a night. It blew our minds, and we were just kids at the time. I think we were so drunk for that whole tour that we don’t remember much. We’re all sober nowadays though. The new material is not quite so forgiving!”

S] Will you be heading to Europe this year?

CG] “Yes! If we don’t, then the guys at Suburban will have our heads on sticks. We can’t wait to get back over there.”

S] Can we expect you at any summer festivals?

CG] “We have 2000 Trees booked in summer, and we’re looking at some more. We think we may be too late with our album release to get Donnington or Sonisphere, but we always keep our fingers crossed. If not we’ll definitely be at them next year. I wonder if Andy Copping reads Soundsphere magazine?! [Editor’s note: We’d like to think so!]”

S] Can you talk us through your favourite track on the new album and why it means so much to you?

CG] “I think the track that means most to me is ‘More Than Life’. I wrote it about my fiancé who has given me two wonderful boys. It’s very personal to me and I just love the string arrangements. I hope she likes it too!”

CG] “I wrote this song inspired by the Sophie Lancaster case. I was talking to Robert Maltby [her boyfriend who was also a victim in the horrific attack] about doing the artwork for the album. He’s obviously been through a lot and I felt like it showed in his artwork. I love it when you can see a person’s emotion in their creations as clearly as you can in Roberts art. He really is a genius. The title of the track is Sophie’s case number, and Robert named the song himself. We have promised to donate some of the proceeds from the album to the infirmary that looked after him and Sophie after the attack. I really love this song, it’s one of my favourites from the album.”

S] Do you have a message for the fans that have supported you on this tour and in the past?

CG] “Firstly, a massive thank you. We have some truly amazing fans, many of them are tattooed [with the Zico Chain logo]. We also have whole families turning up to shows, which we think is fantastic and we have a couple who have just been to their 102nd show! We thought that only happened to bands like Iron Maiden. In terms of a message, believe in yourself and follow your heart. It really couldn’t be simpler. Only you can know what will make you happy, and it may have absolutely nothing to do with the rest of the world.”