Chris Teti of TWIABPAIANLATD talks the impact of ‘Illusory Walls’

Originally hailing from Connecticut in 2009, indie rock band The World Is a Beautiful Place & I Am No Longer Afraid to Die have released their latest album under Epitaph Records. Sitting down with Dom, guitarist Chris Teti talked about success and the new record, as well as the visual aspect of the band and what else he’s been working on this year. 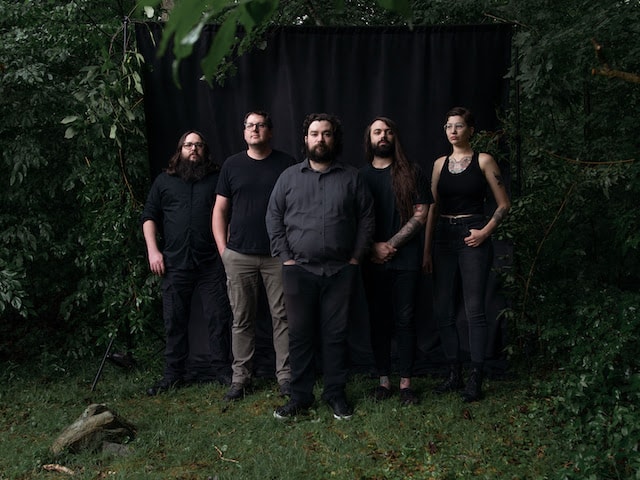 ‘I mean, I work on records all the time, I produce with bands all the time, but every time there’s a World Is record it’s a little bit of a life-changing experience. You finish it, and it’s almost like – say you graduate from high school or college or something, it feels like a stepping-stone or a point in your life that you look back on specifically, and we thought it was going to be much easier, when it was pre-Covid, but even later on during the process, there were crazy hiccups along the way… It was good to have a co-producer this time – his name’s Greg Thomas, he plays in a band called END – and I’ve worked on everything music-wise for World Is since about 2012/2013, so this was the first release where someone from the outside came in. But it also didn’t feel like someone from the outside because I work with him all the time on tour; I’m always around his projects and working on his stuff. So even though it was someone else outside of the band, it was still someone deep in our circle and has been seeing us for years, and is loosely involved in some of our recordings in the past.’

Having not been part of the original outfit and joining the band a couple of years down the line, Chris chatted a little about how he felt being more involved in the process and all that comes with that responsibility.

‘When I joined the band, I viewed myself as an auxiliary kind of thing… I was like ‘oh, this will be a cool little side thing, I’ll play some weekend shows, I can see a couple of other studios, it’ll be fine.’ And then it obviously turned into its own beast and a very large part of my life, as well as everyone else in the band… I’m like the only guitarist in the band now… leading up to everything I was very stressed out, like, ‘now a lot of this comes down on me.’ From a songwriting standpoint, it’s just a lot more on my plate. It’s like ‘now it’s all on you and you’ve got to record the record and produce it, and mix it.’ I’d say I definitely feel different playing the shows right now, because I felt like I was more of a background kind of thing, like I’d worked on the records and stuff but I was kind of just there to fill out some space live – by that time I was the third guitarist. I didn’t have more technical parts that I had to play live… But now, it’s shifted.’

‘I think that playing and writing on this record, a lot of stuff broke up for me personally, even the records that I’m working on now for other bands. It made me feel more confident… I feel more confident writing on other band’s records. I feel like I was more ‘shy’ and I didn’t do many interviews as myself… I felt like I was the person who couldn’t be ‘the’ guitarist!’

The new record, Illusory Walls, has been met with generally positive reception, perhaps due to the ‘nostalgic feeling’ that Chris mentions to Dom. He recalls relating to the feeling of nostalgia with the record, despite not having an affiliation with it himself, which he credits to vocalist David Bello’s lyrics:

‘I guess with this record, when we were first writing it I felt like I had a different view of where it was gonna go. After our previous LP, I felt like I kind of had writer’s block. I think doing the ‘In Circles’ cover, I think that was what helped kicked it all off.’

‘We basically got asked to do a cover of the Sunny Day Real Estate song for a documentary, a documentary that never came out, but we had recorded the track. And with that we had experimented with adding our own stuff into the song and I think that helped to add to the template… Like, ‘oh, we could add some darker, heavier moments’ musically, and so everyone felt comfortable with that through that song, and that was kind of the jumpstart to it all. And I think the way the vocals work, it plays off of a nostalgic thing that our lyrics will have. And it’s funny because I’m not a nostalgic person, I’m not like nostalgic for my childhood – I’m not too sentimental about stuff, I’m just like ‘what’s next, what’s next.’ With some of Dave’s lyrics for example, he’ll mention something that happened in his childhood in the songs… I think I messaged him about them, and I was like: ‘I feel nostalgic for your childhood – I don’t have any nostalgia for mine, but like, I feel emotional now that you’re talking about that never happened to me but it feels like it did,’ and that’s when I knew that I thought people would probably end up connecting to it… I was glad that there were a few moments that they were able to reference some of our older songs, which I guess plays into some of the sentimental feelings, looking back onto some of our back catalog. Not in a way to rehash it, but almost like picking out some of our favourite moments.’

On the visual side of things, Chris expressed the importance of it to him and the rest of the band, specifically in terms of the music videos made for the new record:

‘It’s definitely an important side to it… When it comes to the video aspect, I wouldn’t mind having a video where the band members are in it and playing and doing the typical thing, that would be fine, but I’ve always been trying to have something a little more grandiose and not just the band, with some kind of story tied into it… It’s been less about what people would think is cool, and more about what’s fulfilling to us, and especially with this record. Our synth player and vocalist Katie, her and her husband have a video production company; they did the first two music videos for this record. We knew that they would have an attachment to this record that no one else would have, and they would have an understanding for it that others wouldn’t have… We knew that they were going to have an actual vision for it and some depth to it.’

And when thinking about his definition of success, Chris was quick to express that it’s all about the art, and less about the numbers, for him – and the connection that people have to it even if they’re not a diehard fan:

‘There’s a lot of people I know who maybe didn’t hit us up after our previous record and I can kind of tell which friends of mine come out of the woodwork and are like, ‘oh, I really like this record,’ people I think who wouldn’t really listen to us, people who are my friends not because of this band. Their reaction to it and their excitement about it plays into the success… I noticed that a lot of people I respect were hitting me up, like checking it out on their own; they’d go out of their way to hit me up. That’s the big thing for me. Obviously yeah, people coming to shows, the record sales, but I don’t care about any of the numbers, any of that shit. It’s like, ‘are the people I respect contacting me, are they checking out the record?’ I never really think about that stuff until we do interviews like this because I’m always trying to think about what’s next… I unintentionally will take things for granted. I feel like I always get caught up in, ‘the grass is always greener’… I always have to come back and remind myself to be thankful for what is there, what we have, because most people would look at it and be like ‘oh, you got to do this!’ and I kind of have to check myself… Having everybody in the band be happy with the record, that is success. Are we happy with what we made? Because we did this for us… I like to think that the art of it is more important than the numbers and the business end.’

Leading seamlessly into the question of how he would advise those dreaming of a similar level of success, he said that:

‘It’s good to want to push yourself and not be complacent in where you’re at. But you have to strike a balance between what’s helpful for you to excel and what’s really gonna bring you down… You have to realise everybody’s trajectory is different. I know some bands who blew up on their first record, and some bands who didn’t and had like 10 LPs and found their success through YouTube and touring isn’t a thing for them, but they get a lot of streams online or something. Everybody has a different foot in the door, and really, fuck the numbers. Are you happy with what you’re doing? Do you feel like your art is serving a purpose – is it making you happy?’

So, was there anything Chris wanted to promote?

‘Earlier this year a record I worked on, engineered and mixed, for a band called Fiddlehead, called ‘Between the Richness.’ There’s Anxious from Connecticut, who I worked with last year – they have a new single out. Also, a band called Church Tongue – I worked on their EP too.’