In our latest interview, we catch up with the heavily tattooed, Pulled Apart By Horses drummer Lee Vincent. He talks to us about what it was like playing the heap of live shows over the past year, working with legendary producer Gil Norton, and plans for the future. The band have now released the deluxe b-sides and rarities version of ‘Tough Love’ – it came out on Monday, December 10! 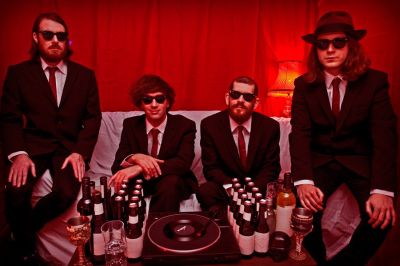 S] Gil Norton has previously worked with countless legendary bands. How was it working with him on ‘Tough Love’, looking back now?

LV] “It was amazing, and has totally influenced how we write songs as a band now. To have the opportunity to work with someone like Gil can never be taken lightly and we certainly didn’t, we really stepped our game up on that album and a lot of that was down to him. It was scary at first as he is a true collaborator and really gets in there creatively. Anybody in a band will testify how alien it is to hand over any creative power to someone external to the band, it’s just not natural. For Gil to come in and have opinions and ideas on how these songs should be written, and for us to be expected to act upon them, was hard to say the least: it was a real leap of faith. It’s Gil Norton though, so that makes the leap a little easier. I used to just sit there and say to myself ‘three Pixies albums, three Pixies albums’ whenever I didn’t agree with his idea. It didn’t matter anyway, he was always right. The b*st*rd!”

S] Is there anybody else you’d like to collaborate with in the future, maybe next year?

LV] “There are always people we have in mind, but that’s all you’re going to get I’m afraid. We’d hate to ruin the surprise!”

S] To reflect for a second…you’ve played your fair share of live shows and festivals this year. Are there any shows you’ve played that really stand out to you?

LV] “My favourite club show this year was at Manchester Academy 3 – I think – the one in the basement. It was fu**ing riotous; the sweat was literally raining from the ceiling. It was ridiculous! The Electric Ballroom show was awesome too [London], I remember looking out into the crowd and just thinking ‘everyone is tryin’ to kill each other’! Oh, obvious special mention to Reading & Leeds too, that still hasn’t quite sunk in.”

S] You’ve just released a pretty cool new video for ‘Epic Myth’. There’s probably an obvious answer to this question, but how much fun was making this video?

LV] “We don’t remember! We got so f*cked up that the next day no-one remembered anything, so we all just presumed we didn’t have any footage. It was like ‘we’ve taken this video budget and we have no video to show for it!’ Luckily James checked the cameras the next day and to everyone’s surprise we had loads of footage.”

S] We love your rock and roll remix of Cypress Hill v Rusko (ft Damien Marley) ‘Can’t Keep Me Down’. How did it feel to be approached to take on this project?

LV] “It was a total honour! When I was a teenager Cypress Hill were the hip-hop act that it was ok for the rock kids to like. I used to listen to ‘Black Sunday’ all the time, so to be given that opportunity was amazing, I really think we did something cool with the track too. I hope it doesn’t just disappear though, I think it deserves to be heard. Also, it was so much fun to do, so if there’s any other hip-hop acts out there who need a ‘rock remix’ who are reading this…”

S] The new ‘Tough Love Sessions’ record is set to be unleashed. What gave you the idea for its release and do you think it gives listeners a good insight in to the crazy live performances of PABH?

LV] “Obviously we’re all Nirvana fans and we loved the idea of releasing an ‘Incesticide’ type album, something that would give fans a bit more of an insight into us as a band. It’s also nice to bring all the b-sides together at last! We’re not really into having remixes as b-sides, so we always aim to record a cool cover or have a new song instead. It makes a single far more exciting to have something totally new from the band on it I think.”

S] In the event of a zombie apocalypse, what would be your weapon of choice and why?

LV] “A shotgun is always going to be a good bet, but then you have the ammunition issue. Maybe a good ol’ baseball bat, or a chainsaw!”

LV] “100 per cent of our energy and focus is being used on creating the best possible album we can right now. I can’t say you’ll be seeing us live any time soon, but at least now you know why!”