Manchester based three-piece Shinies bonded over a love of Elliot Smith, My Bloody Valentine and Teenage Fanclub. Their sound exudes lo-fi guitars with poppy undertones, relying heavily on melody, drive and frantic rhythms. 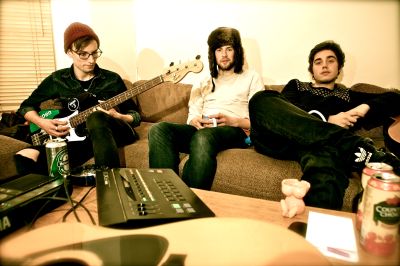 Ric and Adam met at school and had been continuously playing together but rarely their music got out of the bedroom or garages they practiced in. They met Tom whilst he was playing guitar for a local Manchester band and after they split in 2010, he began to take up drums. It was a case of moving into a house in South Manchester and locking themselves in the basement, which began the creation of their own pop songs combining discordant chords and swirling melodies. Having only formed in September 2011, after three months of honing their sound they put their home made recording of ‘Spent Youth’ online which caught the attention of various blogs and Dirty Bingo Records.

The label responsible for putting out first singles for Novella and Woman’s Hour have now come on board to release new tracks ‘Shola’ and ‘Pillow Talk’ as a double A-side single. The tracks were recorded in February by Rory Bratwell on Lightship 95′, a boat moored on Trinity Buoy Wharf, and demonstrate Shinies ability to combine a pop melody with a harder edge.

Released on April 16, ‘Shola’ is the first to song to be heard from the double A-side and you can listen to it here.

6 – Sounds From The Other City Festival, Salford.