Dom Smith drops in (virtually) to talk to Jimmy Chauveau and Tal Vaisman, the members of alternative rock/pop group Kadeema about how they define success as people, their new record ‘Napoleon Tornapart’ and much more. 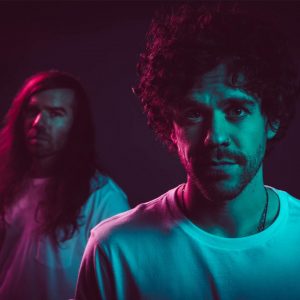 Jimmy and Tal met at music school, but they crossed paths earlier than that when they both attended the same Biffy Clyro gig in Toronto. Tal, who was excited to see Biffy jumped onto and then promptly off the stage, and one year later at music school (which they both attended), Tal told a mutual friend who then told Jimmy the story. “We kinda just became friendly, and then we ended up joining Jimmy’s band and then played there, and that band ended, and here we are now still doing it,” comments Tal.

With their new album ‘Napoleon Tornapart’ having been released in June, the reception around the album has been very positive. “It’s been class so far,” enthuses Jimmy, “It’s been unreal and exiting and just humbling.” With touring on hold and lockdown still a very recent memory, how did the two cope? As it turns out, the two were busy writing songs and coming up with new video ideas along with keeping physically active. “It’s just trying to realise that this is the situation and you just have to fight through,” says Tal.

When it came to recording the album, there were a lot of positive experiences. The duo went down to Glendale and worked with Isaac Carpenter, the former member of Gosling, and current drummer for AWOLNATION. “We basically went down and started a band with him for 16 days, and we were in the room just jamming out ideas,” says Jimmy. There was a lot of back and forth with ideas which made for a creative environment. “It was awesome, and we love being in LA, It’s an environment that we really feel good in,” says Tal.

Another big question we land the lads with is what they have learned about themselves since starting out. “I think our friendship became stronger, how much we confide in each other for personal stuff,” says Tal. He continues to say that “I think we’ve both healed a lot as people.” Another question that links to this is how the lads define success, and the collective answer seems to be not to compare yourself to others and just enjoy what you do. “Enjoy the trip, because for me the trip down to LA when we were recording it, that was the best 16 days of my life, that to me is success,” enthuses Jimmy.

We ask the duo what festivals they would love to be on the line-up for, and they mention the likes of Reading & Leeds, Glastonbury and Sziget festival. In terms of what the future holds, it seems to be up in the air currently, with no word on when live shows can start again the industry is at a standstill. They mention that they would like to try some socially distant shows at some point, but mainly they plan to keep pushing the record and as Tal says, “When shows are back, then Backstreet’s back!”

In a lighter series of questions, we ask the lads what movie they would want their music to soundtrack. Jimmy mentions Wes Anderson and how he would like to set one of his songs to The Darjeeling Limited. “I’d like to have ‘Doin it Right’ instead, from our album and Bill Murray in slow motion running up to the train and missing the train.” Marvel also comes up as a possible answer, with Tal mentioning, “Jimmy actually described our songs as like a Marvel comic book, where each song is like its own character, but they really work together in that same world.”

In our final question to Jimmy and Tal, we ask if they have a message to their fans, to which Jimmy replies, “Spread the good word, and thank you so much for listening to us.”

Listen to the chat below: