Edmonton, Canada based Industrial group MELT are the product of the fevered imagination of Seb Komor – DJ, vocalist and graphic artist – and they are hoping to literally blow your mind with their sonic power. Teaming up with Zombie Girl guitarist Greg Pack, Komor hopes that this will be his most successful project to date and if his enthusiasm is anything to go by, his wish may well be granted. 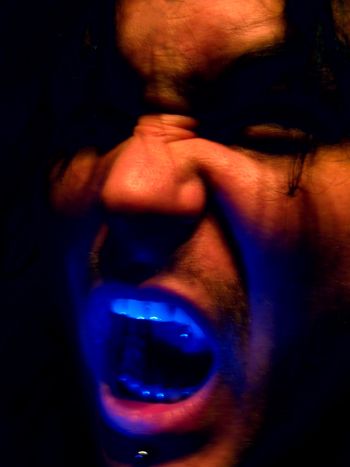 After being in the music business for 20 years it is not surprising that Komor has been involved with many different projects, some from the ground level, like  Zombie Girl (featuring his wife Renee), and others as a remixer of specific tracks by request. MELT, however, is his very own and although this is the first EP they have ever released, it is a band he created in ’94.

“Melt was the first band I had…And because of (other bands success) I just never found enough time to focus more on MELT. That time is now, and this time there are no rules, only big guns and a lot of gunpowder.”

The production of the EP has been a personal one, with the new group seeming to have a life of it’s own and almost getting to be out of control. Komor describes the release of the album as “unleashing a beast”. And what a monster it is. He said,“(The EP) melds all the music I love in one nasty big pot of shit, misery and musical energy…lots of heavy guitars, slamming acoustic drum sounds, but also the classical ebm baselines, blips and synthetic noises/percussion.” Casually he adds,“Oh and me on vocals.”

Not one to be daunted by any prospect, the first song MELT have tackled is Motorhead’s anthemic ‘Ace Of Spades’, ripping it up and turning it into a classic EBM dance track. The decision to remix the legendary rock song had less to do with it’s reputation and more to do with a bottle of Jack Daniels on a Friday night which led to an impromptu jam session.

“I started laying out the beats for it, while Greg [live guitarist and additional guitarist in the studio] was rawking out the guitar riffs…then later on we started getting the idea of performing it live when needed and well, when drunk that all sounded like the best idea ever!”

When it comes to mixing a song, the advice from MELT is to put your own stamp on it and make something different, whilst enjoying every moment of course, Seb comments: “I believe music is supposed to be creative (so)…have fun with what’s there. Mess around with shit!”

While Komor has loved working for others during his career, he has decided this is the time for his own projects and to focus on creating his own sound from scratch –“I’m fucking sick of doing shit for others. I always end up postponing my own music that’s just on fire in my head and hard drive.”

When we got curious and asked who Komor would like to cover next given the opportunity, the list of genre-crossing favourites he came up with was near endless..

“White Zombie – More Human Than Human, Slayer – Bloodline, Ministry – Just One Fix, Juno Reactor – Mona Lisa Overdrive, Underworld – Push [upstairs] or Dark And Long, Bjork – Violently Happy, Depeche Mode – Never Let Me Down Again, NIN – Mr. Self Destruct…I could go on, but any of these would be a wet dream come true.”

Although Komor delights in using the latest technology and taking advantage of the progresses in digital sound recording, for him it is the personal input and artistic imagination that makes a really good remix. He says:

“With all the presets, loops and copy and paste programs out there my mother could make a dancefloor filler in five hours… In the end it’s not the technology available it’s the human factor, using the technology as a tool to create what you envision in your mind. Back in the day there was a lot of time spent getting the sounds you wanted. By connecting various units together, using things in ways they were not initially intended to, is how you got your own sound and learned. You simply won’t learn that by going through presets and pasting loops. Besides, what’s the fun in that? I think me still doing a lot of things the old fashioned way not relying too much on technology, but on creativity is what works for me.”

As well as using the music to create the pictures created within the mind, graphics form a large part of Komor’s audio weaponry and seeing as he’s also a graphic designer it’s something that he feels strongly about when producing new material –

“Graphics and music are the more powerful methods of getting an emotion or point of view across, not to mention opening the door to your imagination. (I was) once was at this art exhibition where the artist had a couple of musicians playing music live at the exhibition to add to it all, and it really put you in the headspace of the artist and paintings.”

As our conversation comes to a close, the artist’s final words give us the inspiration behind the opus and MELT’s debut release –“The one word I felt was the foundation of most of the songs is the title of the EP – Parasites.”

Parasites is out in March/April 2009, through Synthetic Entertainment.