Matthew Rehwoldt Interview: ‘There’s part of you in every role you play’ 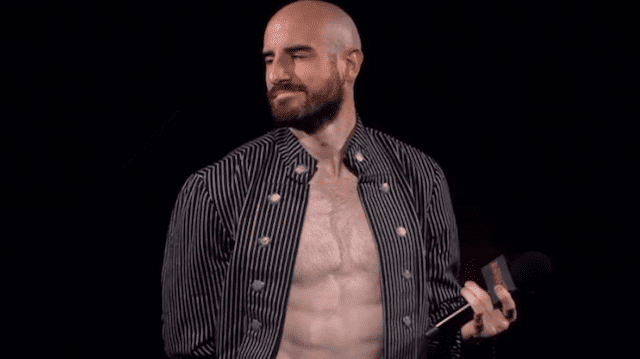 Over the last few years, there have been few professional wrestling characters who’ve brought a rich sense of theatrics to the game quite like Matthew Rehwoldt.

You may know him better as Aiden English, one half of the genre-bending Vaudevillians tag team from NXT and then the operatic hype man for Rusev in WWE. He’d belt out odes to Rusev Day while trying to seduce the man’s sometimes Russian, sometimes American wife (legal ed: on-screen storyline of course). Pro wrestling! Good stuff, man.

Now, the university-trained actor is illuminating IMPACT Wrestling under his own name, recently winning the Homecoming King & Queen tournament with Deonna Purrazzo on his debut.

He recently opened up to Soundsphere’s own Dom Smith on Gimme A Hull Yeah! about his finding his (very impressive) performing voice, his definitions of success inside and outside the ring and how the collaborative spirit at Impact helps bring out his inner Drama King.

“When you leave a company like WWE that tightly controls their scripting, there’s a misconception you can do whatever the hell you want if you go somewhere else,” the Chicago, Illinois, native says

“That’s not true either! All the other companies’ have a vision too. IMPACT Wrestling has a much more collaborative feel. We as performers enact the vision, but they want to hear from the talent.

“I don’t have to hunt people down and knock-on doors and hopefully get 30 seconds with someone. The lines of communication are wide open. That’s the key. They may not take every idea, but the conversation is always there. The collaborative environment is what I loved from day one.”

It’s hardly surprising the Drama King prefers the ensemble approach compared to the virtuoso impresario running the show at his old job. As an actor who focused on stage combat during his educational career, Reinwoldt brings his life’s work to his tuneful on-screen characters and, given the additional creative freedom, it shines through all the more.

“The stories I tell are real. There’s a lot of me in there,” he says. “I took this preposterous idea of a guy who wanted to use pro wrestling to get to Broadway – because everyone else went to Hollywood – and it’s evolved from there into different versions of that.”

“Any role you ever play ever, whether it’s pro wrestling or acting, there’s a part of you in that role. If you don’t think you can relate to anything, trust me, it’s inside you somewhere. Even if you’re playing a serial killer, you have something in you that can relate to that role. I’ll give all the credit to [LA acting coach] Howard Fine, who said if you’ve ever been in your house and a fly drove you nuts and you went around the house with a swatter waiting for it to show up at a window where you could finally get it, you know a little bit about what it’s like to be a serial killer. You’ve had this lust to end its life.”

You can sign that quote off as one that’ll gave us a little introspection. His unique training has helped Rehwoldt evolve his own voice as a competitor, but he says he’s far from the finished article. The key, he says, is to continue experimenting. Success, he says, is defined by your own satisfaction, not your perceptions of others’.

“Try everything, don’t be afraid to put yourself out there,” he advises. “You will trip and fall numerous times. Things will fall flat all the time – not just your singing notes! It’s those missteps that will lead you to where you need to be.”

“Don’t compare yourself to other people,” he tells young people who struggle to envision themselves hitting the summit. “You are not that person, you did not live your life, you do not have their circumstances.

“Find the love in doing the work. If you wanna be that guy, you better love the work it takes to be that guy. Do the things nobody sees. It’s the hours off camera, toiling in your own home or in the office. Love that part and it’ll make the success all the more worthwhile.”

An eight-year stint in WWE brought plenty of changes for Rehwoldt, who tells us of the lasting life and career lessons imparted by the likes of William Regal and the late Dusty Rhodes during the 20-minute chat.

Following his stint as an NXT tag team champion, the team broke up when partner Simon Gotch was released. His main roster run was defined by his association with Rusev (now Miro in AEW) before he gained vital experience as a colour commentator on 205 Live and NXT UK. It’s a role he now undertakes for New Japan Pro Wrestling’s English language broadcasts. Change and development are a constant in the pro wrestling world, Rehwoldt says, and you need to be ready.

“The biggest thing is confidence. The confidence to go out there and do what you need to do no matter what. Wrestling it has taught me to be ready for any given situation.

“We play big games of improv, very physical games, and things change all the time. I come from a fight choreography background and there’s an old rule that for every 60 seconds of violence you needed at least 6 hours of practice. In wresting we’re putting together 20-minute matches in an hour because we have that cumulative experience and we’re trusting each other with our bodies.”

“At the beginning all that stuff is very intimidating. Over time you get to that point where you’re like ‘OK I have an idea how this is going to go but I’m ready for anything and I’m ready to take command in that ring.’ Whether it’s an independent ring in Iowa or IMPACT Wrestling on television. It that confidence to be ready for anything and to command that stage.”

You can watch Matt on IMPACT Wrestling in the UK and Ireland free on IMPACT Plus, while PPV events air on Fite TV. You can also follow him on Twitter @DramaKingMatt, where he started the #RoughCuts initiative to showcase unfinished art. He also streams on his Twitch channel.