“I realised I needed to redefine what I saw as successful,” says Mikey Donnelly of his revelation surrounding his musical journey, and all that that entails. 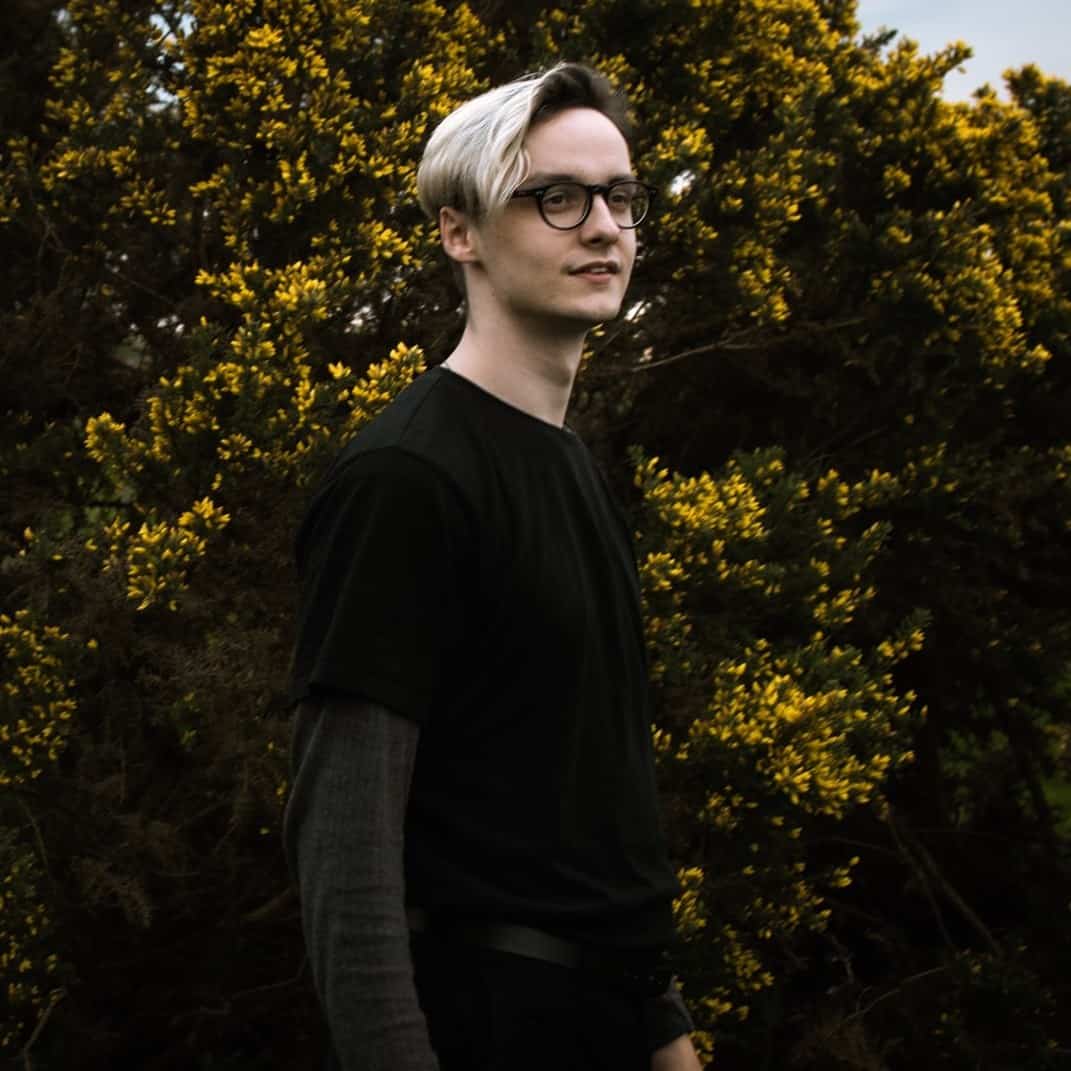 With Epilogues’ new EP me opening up an exciting new chapter for Mikey, Dom had a catch-up with the promising young artist to chat about the release. “It’s a strange thing,” Mikey confessed, “it’s more momentous than you realise, every time.” Based currently in Leeds, Mikey is settled for the rolling hills of Yorkshire, perhaps most fitting for his fragile, dreamy, and atmospheric folk sound. Having released the new EP through Tambourine Machine Records with producer Mark Gustafson – “because he’s a great producer, and I really wanted his opinion on it” – Mikey shared his thoughts on its development and how Epilogues came to be, as well as his own personal and emotional journey.

“This stuff is two years’ worth of work; it’s really gone back, and I got to the point where I just desperately wanted it out,’ he explained, “Now it’s out, it’s weird. But I feel good! It’s nice, it’s had good reception and lots of nice conversations popping up.” Like many young musicians, Mikey started Epilogues when such an outlet is so desperately needed – like navigating the uneasy waters of starting university and moving away from home for the first time. Of course, the process of developing an identity – musical or personal – is never smooth, and saw Mikey experimenting with the alternative moniker of ‘miles.’ for a while. Though there was a practical reason for the change back to Epilogues – “miles. is not an easily found thing on Spotify. It was just a nightmare to find me!” – he cites a more meaningful explanation for the change:

“I started as Epilogues, and it kind of saw me through this really emotionally turbulent time […] I got to the point where I’d found a lot of peace and healing and all of that kind of stuff, and then I ended up thinking that I wanted to stop singing the old songs, so I moved it to ‘miles.’ I did that for a while… I did a big spiel when I moved it back to Epilogues. It was basically like, I shouldn’t shun where I was because of where I am now, I should always carry that with me in a way.” For Mikey, the main thing was getting his music out to be heard: ‘I don’t really care about monetizing it, or getting status from it.’ So, what is his definition of success?

“For a long time, it was exposure and being someone that people knew, and it was kind of like the more ‘glossy’ side of music, which people rarely get anyway […] The things where I really felt like I’d done something good and I felt successful were things like – no matter how many people – just engaging someone in an audience, properly, and you know when people are not just hearing your music but they’re listening… That means so much. So, I suppose, my definition for success is doing something that is useful, and if it does something slightly good, that’s successful. That’s the thing.’ However, it’s not always been simple. Mikey detailed the moment he realised that he had to redefine what he saw as successful, in order to get himself out of a dark place:

“I had a bit of a – I wouldn’t say a breakdown – but I had a full ‘dummy out of the pram’ moment, just being like: I don’t want to do music anymore, I hate it! And it was because I was putting all of this pressure onto it to be something. And it was massive, actually, it had a huge emotional toll on me.”

Such a revelation can often be cathartic, which Mikey spoke openly about; it’s unsurprising when his music is so personal and raw. So how does it feel to create music; is it a release? “The overarching thing is yes, it is catharsis, and music is a healthy thing for me. I think if it wasn’t, I wouldn’t do it […] If it was damaging to me, it’s not worth that.” Mikey’s relationship with his mental health is something that he’s had to think about on his continual journey to a better place, and thankfully music has been a positive outlet for him, even though the content of it is often quite melancholy: “Lots of people mistake it for sad music; yes, it is somber, but I try and put a lot of hope in there.”

As a person, he describes himself as happy and healthy, and credits that feeling of being hopeful in difficult times as something that has helped him mentally: “I think that the only reason why I am healthy – well, one of the reasons – why I’m healthy and happy, is because I don’t shy away from the times when I’m not, and I can kind of deconstruct those feelings and I can look through it – again, music does that for me. It’s that kind of process that actually makes me happy and better around people, I suppose.”

The new EP features four tracks showcasing that distinctive, folky sound that fans of the music hold dear. Mikey explained the meaning of these songs and what they represent for him at this point in his life, and in his musical journey: “So, as a kind of broad context, [me] is the first part of two parts, so there’s a second part coming – there’s a part called ‘me,’ the second part is, quite predictably, called ‘you.’ So, because some of it is a bit older, some of it just kind of circumstantially isn’t relevant.” He explained these tracks were still important to him, despite not being in the same position as he was when he wrote them: “[They] will always be a part of me, they just aren’t where I am right now, and if there comes a time where I am again, that’s fine, I don’t mind.”

Mikey’s introspective way of thinking is apparent within each track on the EP, which opens with the titular track me: “It kind of goes into what character I’m gonna decide to play this week, the various masks, because it’s a continual process.’ On a similar note, the EP’s single The Gap, whilst ‘similarly somber and quite low-moody,’ has a positive side to it: “there’s a lift towards the end, which is the lift that’s supposed to take us into ‘you,’ so there are these two parts that do represent me at the moment.” So, do me and you represent a specific point of his journey in particular?

‘I actually think ‘me’ is more where I was/where I am. And then ‘you’ is going to be where I am/where I want to be. You know, it’s the kind of lighter side. I carry both sides with me at all times – because everyone does. No one can be super happy all the time. Even when I felt like I was in a fight with my mind the whole time, I still had moments of clarity and happiness and joy and they were just less, it was just a lot less.’

In terms of looking after his mental wellness now, Mikey says that “I put a screen lock on my phone if I’ve been on it for a certain amount of time.” He’s also taken advantage of gentle exercise that allows him to be pensive and present: “Walking has been wonderful for me. But namely I think it’s time away from screens. I think that allowing my mind to have the time to not be distracted and essentially tell me what it wants to do, to give it that space to be like, ‘let’s think about this for a bit because you have been pushing this under for a long time,’ brings me a lot of peace, a lot of happiness, yeah. That kind of thing.”

Of course, performing life is something that Mikey cherishes, having played in many countries, as well as across the UK. Given the pandemic, he’s been taking advantage of livestreaming. But does it match up to that feeling of being onstage?

“I love performing live. I mean, it’s not going be the pursuit of every single musician, but I think it’s the ultimate expression of being a musician; I think it’s amazing […] I’ve played in a bunch of rock bands and louder bands – that doesn’t scare me nearly as much. That’s just fun, because I feel separated from it, because I feel like it’s not like my heart, or that kind of thing. But performing my own thing is quite scary because if people don’t like it there will always be a little bit of me that thinks: ‘oh my God, they don’t like ME, like I’m the problem,’ like it’s me that’s faulty, which is something that I constantly have to separate.”

It’s clear that Mikey shares a significant emotional connection with his audience, something he acknowledges can be difficult, but ultimately fulfilling: “It’s scary but when it is rewarding it is just the most affirming thing possible. It’s hard seeing sometimes how broken everyone is. Sad and heartbreaking, but it’s nice that they have space to talk to you about it, I suppose. Terrifying and rewarding.” Something that makes also Epilogues’ music stand out is how it could easily be found on a soundtrack. If this were the case, which film would Mikey gravitate towards? ‘It’s called Comet, – it’s just a film I absolutely adore – it’s just so kind of mad and airy and ethereal and beautiful and it’s all about love and it’s all about that kind of thing so I would definitely want to do that.”

Most importantly, however – what would Mikey want to say to fans of Epilogues; past, present and future? ‘Oh, my Gosh! Well, an enormous thank you. I’d love to be the kind of person that can generate everything myself and generate affirmation, and purpose, but at the end of the day, I am happy to admit that I need other people. So, anyone that has responded positively or reposted it or told their friends about it, or even just said ‘Mikey, that was pretty good,’ just a massive thank you. It doesn’t work without other people. To people that are kind of just picking it up and listening, I’m just encouraging them to lean in and listen to it, to try and get inside of it, ‘cause it might be useful. It might be.”