Music For Monsters: How Free the Narrative created the perfect theme for Adam Scherr

Home » Music For Monsters: How Free the Narrative created the perfect theme for Adam Scherr

Tommy “Tankx” Shaffner and JC on providing the soundtrack for Adam Scherr’s arrival, and who might be next… 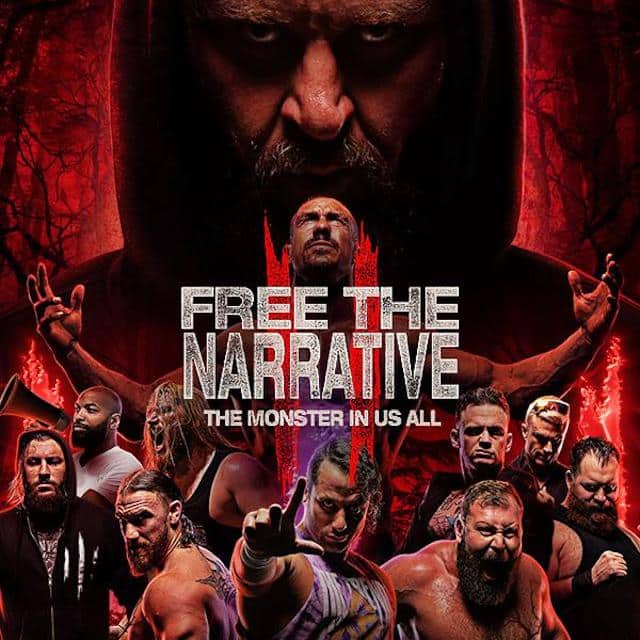 The promise of the avant-garde Free The Narrative – founded by the disenchanted and constrained creative mind of former Impact Wrestling and WWE star EC3 – is to enable professional wrestlers to take control of their identities and stories, and share them with the world, unfiltered and true.

Prefacing that story for an audience requires a soundtrack; the personification of the performer’s every entry into any room. When Adam Scherr – formerly WWE’s 7-foot “Monster Among Men” Braun Strowman – arrived for Free The Narrative II The Monster In Us All, the job of creating the accompaniment fell to Tommy “Tankx” Shaffner.

“When I’m writing, I’m usually writing from my perspective,” the company’s lead composer told Gimme Me A Hull Yeah!. “Thinking about writing a song for these guys, that’s technically going to define their entire being? That’s fucking heavy duty.”

“When I did Adam’s theme, I thought about it as ‘if I were that dude and I was that size, how would I want it to sound every time I walked into a room full of people’? That’s a scary moment. I’m pouring my heart out for this whole other entity when I’ve never really met Adam. And I have to tell his entire life story in three minutes! Wow.”

Free The Narrative depicts itself as an independent film company, less confined by a rigid pro wrestling industry that the principals believe is resistant to change. It presents wrestling in a truly cinematic environment, underpinned by a dramatic original score.

The nature of these stories is deeply personal for the participants and music plays an intense role. Scherr’s heavy, relentless thrash-metal WWE theme was emblematic for his character; filled with the ominous power-chord laden ferociousness and distinctive roars. So, kicking that up a notch for FTN presented the team with a challenge.

“The Narrator” JC is EC3’s creative muse and co-founder of FTN. He added: “Adam said: “Give me something in the same world as Bray’s (Wyatt) theme.” He wanted The Fiend and that’s all he needed to say to Tom and I.

“One of our associate producers said: “I never thought you could write a heavier theme song for a guy who had a heavy theme song.” Braun’s theme song was heavy as shit! I always want to do spin kicks when I hear that song! Tom achieved that. You can just see him towering over everyone when you hear that song.”

Between Tommy and JC, who say they’ve played in up to 50 bands, many of which together, are many shared influences. Shaffner is inspired everyone from Trent Reznor to Tom Petty. He trained as a sound engineering and is a self-professed “master of the axe”.

He says: “I was glad [Adam] mentioned The Fiend theme, because I’m a big Code Orange fan. Those kids are doing everything I wanted to do when I was 25. They’re 25 and doing it.

“They’re a big inspiration,” JC adds. “Releasing ‘Underneath’ at the start of the pandemic was such a motivator for Tom and I. They were controlling their narrative left and right. They weren’t letting a pandemic or a record label get in the way of getting their art out there. That’s why they’re touring with Slipknot and Killswitch [Engage] right now.

“They’re such a motivator. We played in bands that influenced their generation and now they’re influencing us to keep on going.”

Music will continue to underpin Free The Narrative’s creative direction. It sits on equal footing with the unique visual presentation, the almost poetic narration and the action between the ropes – which is cut entirely differently to the established flow of a wrestling match.

More narratives will be freed in the future, which means more deeply personal compositions to accompany those stories. Some obvious candidates, others less so.

JC mentions what may be an ideal fit; Windham Rotunda, the former Bray Wyatt, no longer with WWE and seeking a future beyond the confines of the squared circle.

“I think that The Narrative, and what Adam and EC3 have given in their performances, there’s going to be a lot more people who need to come in and need to destroy who they are inside. If that’s being said, Windham we’re waiting for you to knock. It would be great to work with Windham. He’s just like Code Orange, where he’s influenced us to create this cinematic reality.

“I’ve joked about working with Ric Flair, just because I’d like to beat him down into not being Ric Flair anymore. I want to see what kind of man, at that age, still has to walk around pretending to be that person. What kind of misery is Ric Flair hiding? I don’t care about your 17 titles or any of that stuff, I want to see what’s inside him. It’s not cancelling somebody, it’s hey man, grow up. I’d love to give him that opportunity.

“As far as who I want knocking on that door? We’re don’t really exist as a wrestling company any more so we can work with who we want. We’re really an independent film company, so I’m more interested who comes to us at this point.”

If you haven’t arrived at the destination yet, Free The Narrative, it’s available on YouTube and Fite TV. You can see the full interview with Gimme A Hull Yeah! Below.