Veronica Falls are the product of a special relationship between Britain and American musical genres that can confidently be called promiscuous. From slightly subvervise 60’s “psycho-pop” to chaotic 80’s jingly guitar sounds from San Francisco to Glasgow, New York to London.

Veronica Falls could easily be an All American affair (they have been arguably better received over there and we suspect would draw a bigger crowd on such a night) was it not for titles like the wonderfully British ‘Beachy Head’. The fact that they sound so relevant is down to the knack they have with irresistably catchy tunes that float into your head and refuse to leave. They seem chipper enough on stage to belie the apparent seriousness of their material in songs like ‘Bad Feeling’ and ‘Found Love In A Graveyard’ and just light enough to be called “swoony” and “dreamy” rather than plain miserable. They end with a manic speed-of-light strumming ‘Come On Over’ which leaves the crowd slightly stunned.

Support band Chuck Jager are a London based four-piece with two members calling York home, so this was a semi-home-coming gig for them. Clear sparkling guitars combine with Rory Jones’ pure pleading lead vocals. ‘Purple Words’ is the standout track but, tuning issues aside, the set rolls along nicely with the distinct feeling that given the chance these songs could find a special place in your heart. 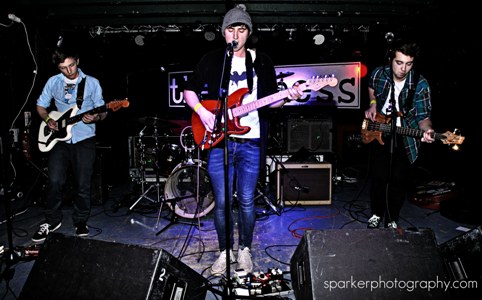 Second support band Novella make things a little darker. Stage room is required for the array of guitar pedals and a little dry ice even drifts over the crowd. Bassist Suki Sou is elevated by impressive brothel creepers and plays with her long hair dangerously close to “shoegazing” levels of face obscuring. Guitars and vocals belong to Hollie and Sophy and merge and crash in all the right places creating a sound that takes the heart of My Bloody Valentine and makes it flutter. The crowd are seduced into dancing for current release ‘Oh Brian’, and ‘The Things You Do’. 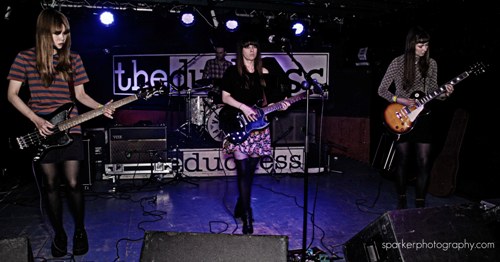 This is Veronica Falls first visit to York and we hope they found enough ghosts here to want to return.