As part of his …Investigates blog, Rich Fownes (Bad For Lazarus, Eighties Matchbox B-Line Disaster and UNKLE) chats honestly and openly with Wes Borland about his time with Limp Bizkit and the brand new album he’s just released with his own project Black Light Burns. 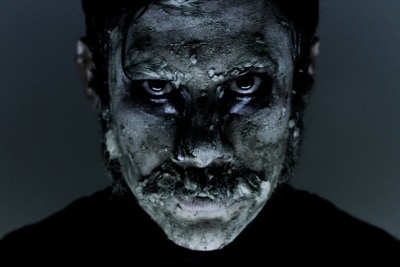 “I had forgotten everything that was good about Limp Bizkit”

I always felt pretty bad for nu-metal musicians. All opinions on groovy riffs, phat beats, and the whitest of rapping aside, they believed in their own musical revolution as much as any crusty punk, and it worked! They were “it” and all hands were pats on backs. It seemed like overnight those patting hands became fist shaped, and were ready to smash.

Through it all, one man got a free pass.

People never gave Wes Borland the same amount of the animosity so easily focused on his band at that time, Limp Bizkit, or indeed, his entire musical network. To me, the most interesting thing about this was that no one could ever offer a reason for this. It just was. Slipknot even launched a ‘Free Wes Borland’ campaign as if to highlight the conundrum: that it is fine to like what Wes does, even if you don’t like the band he does it in.

“It’s always been kind of people to say that. There’s something about Bizkit that polarises people. They either love it or they are disgusted by it. There’s something about it that is important. I think there’s something for good or ill that we did and shouldn’t be dismissed. I always felt that Slipknot was a great band, but it seemed like they were playing a part, like talking shit about the other big bands and stuff like that. Throwing stones at us just seemed like part of their character or the personality that they were trying to portray. I didn’t really take any of it that seriously, because it just seemed like an act, but a good one, and one that had to be done.”

At the time Wes didn’t exactly take it in his stride. After a few harsh words he jumped overboard the good ship “nu-metal” and seemed to find himself in some unforgiving seas. He says: “Yeah, at that time we were huge, and I really didn’t like it that much. I never really liked the whole VMAs thing, and having celebrities around us. That whole thing seemed really foreign and wrong to me, and I never felt at home there.

“I think at that point, I had completely separated myself off from the rest of the band, and I had started to listen to and believe all the negative press that was going around about the band, and all the hatred for the band and I couldn’t take it any more. I didn’t want to be there. I think I was living in a state of ‘Oh well this worked out so it’s easy for anything to work out’ and that’s not true. It’s not easy for anyone to make it or anything to work out. You can do one thing and be really successful and try to do something else and it’ll just flop!”

I was keen to hear his musical retort, although it didn’t come for a while. After a few false starts, he re-emerged, albeit in other people’s bands. After stints in Marilyn Manson and From First To Last, Wes finally emerged with his bona-fide “I’m back!” band: Black Light Burns. The first album [‘Cruel Melody’] wasn’t exactly bad, but I didn’t find it a comfortable listen. Wes was clearly finding his feet again, this time as frontman, and lead singer. It would have been unreasonable to expect it to be an instant classic.

“The first record was like a learning experience. I was working with my friend Danny Lohner on it. He’s a really good vocal producer, and we spent a lot of time trying to get the vocal takes right and trying to get my tone right as a singer. After a lot of hard work on the first record and finding where my voice sat, figuring out what tools I had to work with, we took it to a live environment with the band, where I was trying new things with them and really trying to be more expressive. So in the second record I went “Fu** it, I’m not gonna take all this time on the vocals. I know what I can do vocally, it’s not much, but I know where my capabilities are and I also know that in order to be an entertaining vocalist I was going to have to put a lot more of my personality into it and have those vocals be more expressive, instead of just relying on my voice which I’ve never liked that much. I like it more on the second record, it feels more like myself, I guess.”

He’s not wrong either. It took me a couple of listens to let my guard down, but there are some really good ideas kicking around. Listen To ‘Splayed’ from the latest BLB record [‘The Moment You Realize You’re Going To Fall’]. Take off your Limp Bizkit-brand boxing gloves, and put on your Jesus Lizard-shaped thinking cap. You’ll be surprised. The differences between the two records are huge. Wes finally sounds like a man just having ideas, rather than trying to process them to prove something.

“One of the main ideas with the whole record was to have a heavy sound without a lot of palm-muting and metal-type attack on the guitars. That’s why there’s a lot of heavy distortion on the bass, and a lot of the guitars are Telecasters in the neck [pickup] position, because it gives that wild, bitey, rowdy sound.

“Playing with From First To Last was like the final piece of the puzzle [for this new record]. Within hours of meeting we wrote a song together just to see what would happen. Working with Derek [Bloom, drums], he had a whole vocabulary in his drumming that I had never encountered before. I had played with other drummers like John [Otto, Limp Bizkit] obviously, Josh Freese [Weezer, Nine Inch Nails], I even got to play with Tommy Lee once which was totally weird! But playing with Derek; he had this whole punk rock attitude which made me have to change how I attacked playing string instruments. His accents were naturally on different parts of the beat, that I wasn’t used to hitting.

He has a groove to him but it’s sort of like an anti-groove. It’s very urgent, and to find that pocket with him was difficult at first. When I got it, it added a new dimension to my playing. This light bulb went off in my head, I went ‘Wow, I really need to be working with as many different people as I can at all times.’ I really wanna get involved in any kind of opportunity that happens, to acquire that information.”

Wes had done a lot of growing up. In the post-Bizkit days he had dedicated himself to different instruments, bands, and even media: his oil paintings are no joke or quirky point of interest. It all seemed to be intentionally different directions as well. To me, it looked like he could crop up anywhere, in any band, as long as it wasn’t a nu-metal stereotype. That’s why in 2009 I was surprised, to say the least, to see he was reforming with Limp Bizkit.

Things weren’t exactly the same as the old days though. I found it hard knowing what to make of it. Wes had changed his guitars, amps, wardrobe, makeup and even dance moves. I couldn’t tell why he seemed to be acting so differently during a reunion. After all, if he had so many new aesthetics to express then why go back to old ground to express them?

“Actually, coming back and reforming was when I finally gave myself to the band, and just went “y’know I don’t fu**ing care what anybody thinks. I’m gonna wear whatever I want, do whatever I want, act however I want and be a part of this band in a way that I have never been before. And that’s what changed when I came back, I wasn’t trying to take us in a new direction, I was trying to accept the direction and accept what we were, and just be a part of it. Over the last four years I’ve ended up having a lot more fun with it than I ever had before.

“A lot of the reason that I move differently onstage is because over the years my guitar has gotten lower and lower. I’ve just found it more comfortable and I think it looks better. I didn’t even realise how high I used to wear it, until I look back and go ‘Wow, it looks weird!’”

When I was pondering his career and planning my questions, I considered some of these notions might seem tough or confrontational, but through our exchange he was relaxed and thoughtful. On the one hand, I’m sure this isn’t exactly the first time he’s been confronted. But it seems more like he has been through this all in his head a million times. He’s no idiot, and his career is no accident. His intelligent and considered demeanour seems to have finally taken him to a more “zen” plane, rather than one of conflict and dichotomy that plagued him through his earlier years. He’s finally found where he feels comfortable amongst a muddle of rock ‘n’ roll sensibilities and judgmental pundits, and can finally enjoy being grateful for his friends, talents and fans.

“The crowds are exactly the same. Some of them are people who have been there from a long time ago, and some are brand new who are experiencing us for the first time. It shocks me that there are still 15-20 year-olds at our shows, but there are, and they’re die-hard about the band and I’m just like ‘What!?’ I think the shows are more fun. One thing that we do that’s really fun is just constantly pulling people out of the crowd and putting them onstage with their instruments. It’s a big concert but we have a lot more fun. We play a different set every night, and don’t have anything scripted. We’ve played sets where we’ve just started ignoring the set list because we are just so far off from where we were going to go, and I think that just makes it more fun.”

What a nice young man. I sure hope that when I’ve been in bands for 18 years I use the word “fun” in my interviews as much as he does. ­

Black Light Burns. How To Look Naked: Chapter 2 from BlackLightBurns on Vimeo.