NXT UK’s Sam Gradwell talks to Soundsphere’s Dom Smith from a noisy WWE UK Performance Center where he opens up on his love for Oasis, the yoghurts catchphrase, and goals to inspire his son. 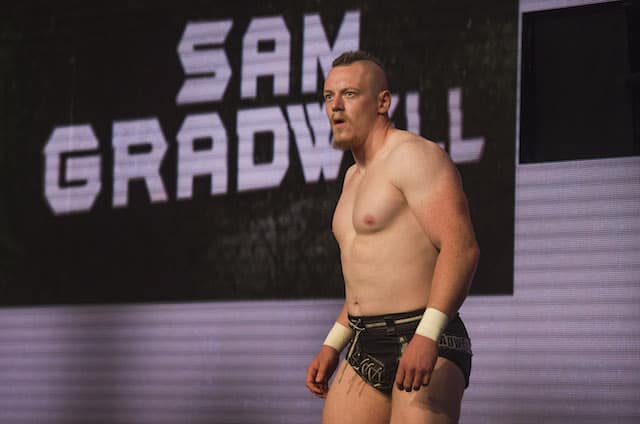 One of the biggest questions involved Gladwell’s return to the ring after time away due to injury, but he remains in good spirits. Since he has been away, NXT has gone from strength to strength in terms of popularity. His ligament injury in 2017, was well documented, but that made him no less determined. “Sometimes you don’t know who you are as a character until you encounter some real hardships.”

Being an ever imposing antagonistic figure you do wonder about the backstory to the man himself, but things aren’t always as simple as they seem. Things were not easy growing up, he and his family endured a difficult life in Blackpool, with Gradwell acting as a caregiver to his siblings when homelife took an unfortunate turn. Wrestling provided solace in those uncertain times, with his career he remains laser focussed and unaffected by the usual distractions some professional wrestlers have (gaining a large social media following, the attention of ringside observers).

Sam dives into how he kept himself busy in his downtime recovering from his injury. He sat in on every taping of WWE NXT, and saw everything from seven different angles, just watching the competition and plotting his return back to the ring. “While I’ve been away I’ve been learning other areas of the business, which I believe anyone in my position, anyone who gets injured and anyone who gets into this sort of position, they should be taking advantage of everything around them,” Gradwell enthuses.

Speaking more about what he hopes to achieve with his return to the ring, he says “What I’ve got going on up here is different to what every member of this roster has, I’ve got a personality, aside to me that no one else has, I’ve got a mouth on me, I thought you know, why not use it.” We also take in the discussion around success, and what it means to him. “The only person that should define success for you is yourself. If someone is trying to find themselves, find out what excites you, find out what you enjoy, what you love what makes you passionate.”

Another love of Gradwells is the band Oasis, and to say the Mancunian rockers are a big influence is an understatement. He watches the documentary ‘Supersonic’ while training on the treadmill, as he finds it deeply inspirational. “Watching this group of people come from a council estate in Manchester and make something out of nothing, is just absolutely incredible.” The levels of inspiration born out of his Oasis obsession knows no bounds, with the gig at Knebworth setting the benchmark for how he wants his live events to feel, in terms of energy. “Things like that make me want to create those moments and make me want to create those memories for people.”

Rounding off the interview, we also talk about his young son, and how he has no limits in terms of what he can potentially achieve. “When my little boy says to me, tells me what he wants to do when he grows up, nothing is impossible, nothing out of reach, anything he wants to do, he can do.”

We can now only end the interview in one way, one of the last things Gradwell says to us is the soon to be immortal words: “Get on that, you bunch of Yogurts.”