In a long overdue chat, we talk to Johnny Fallen, we discuss the band’s latest material, having lots of friends in Finland, the York music scene and plans for this year! 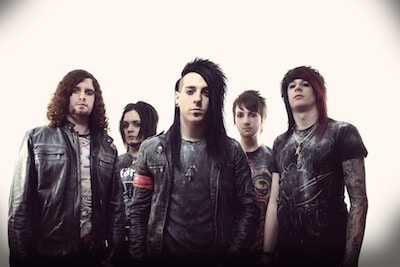 S] You have a tour of Finland planned – how are you looking forward to going back?

J] “Hey, we are going back, actually. As I write this, I’m very excited to be going back. This time we’re only popping over for the weekend to headline a rock cruise sailing from Helsinki to Estonia which is bound to be crazy! Then we’re going back in March for a week or so. It’s always great going to Finland!”

S] Were you surprised originally, at how well you were received over there?

J] “Yeah, I guess I didn’t really know what to expect as it was the first country outside of the UK that we had played! It was a pretty insane first tour over there. I had put a bit of time in trying to network with some Finnish people before we got over there, but it was like the hype had already started. They really look after us, always turn out regardless of weather or what night of the week it is and they always, without fail, make sure it’s a party!”

J] “The last year I think we’ve been behind the scenes trying to find our identity a bit more as a band, while keeping up to date with playing over seas. This year we intend to make our mark more on the British circuit. We have our first video due out mid-march to promote our new EP. That will be followed by another video in April and then release of the actual EP and some UK shows in May! We’re actually about to shoot the second video for this EP so pretty hyped for that!”

S] We’re based in North Yorkshire as well – what are your thoughts on the alternative music scene in the city?

J] “We’ve been a part of the York and Yorkshire music scene in one way or another for over 10 years now and it’s always been good, but it’s never been quite as alive as it is now! Over the past five years or so the alternative music scene seems to have merged into one gigantic family. If you’ve been to a gig you’ll know, bands are all at each other’s shows, all promoting each other and helping each other out. The city is literally haemorrhaging amazing bands right now, churning them out left right and centre. I haven’t been to a bad local show in as long as I can remember!”

S] Are there any other bands in Yorkshire that you feel we should be looking out for?

J] “How long have you got, Seriously! There are obviously many bands round here that are already on the map like Glamour Of The Kill, RSJ, With One Last Breath….all amazing. But there are so many bands to tell you about! The Bastard Sons, A Joker’s Rage, River City Ransom, Shot Down Stay Down, Mitzi’s Revenge; the list goes on! One the best live bands I’ve ever seen is Beyond All Reason, it’s criminal they’re not already gigantic! Also my “one to watch” would be Zak Ford. I expect big things from this guy in the coming year. If you go to a gig with any of the above, you will not come away disappointed!”

S] There seems to be a real sense of camaraderie within the group – how long have you all been working together?

J] “As the current line-up, I think it’s about two years?! Some of us have been together for a decade now. That’s a lot of stages shared and songs played! I think over the years doing that we’ve come to understand how each of us works and how we work best as a group! I think it’s because we’re always up for making each other laugh!”

S] How will your next material expand and develop on ‘Bury Your Demons’?

J] “I think we want to make sure it seems to continue from BYD without a massive leap into the unknown, but we’re thinking a little bit more outside the box with this next EP. We’ve got a few songs down already and it’s definitely a bit of a different sound to BYD. We’re testing our boundaries, having some fun with production but still making sure we keep the rowdy live vibe. I’m really excited to see how it’s received.”

S] It’s a very “complete” rock record with a range of influences, and a real statement of intent, so what were the biggest challenges for you all when making that record?

J] “To be honest, I think when we wrote BYD we had a massive thing about making songs simple. Prior to BYD we had some songs that were chaos, six minute long epics. I think we had an idea that we wanted to make our music accessible, so we simplified and aimed for something solid and catchy, an album that flowed with a start middle and end, neat and tidy. The challenge was keeping a lid on that but also making sure we established our own sound!”

S] Likewise, what would you say the biggest challenges for a band like yourselves in 2013?

J] “We have seen hundreds of bands across the world flood the music scene as carbon copies of each other and this seems to be widely accepted and almost requested by musical audiences everywhere. Our main challenge is going to be breaking down the walls between us and some of those audiences. Maybe it’s a bit clichéd but we don’t seem to perfectly fit into any of the genres or subgenres of rock and metal at the moment. So, the challenge is going to be breaking into the UK scene properly without changing our identity entirely. We also face the same challenge as every band out there, getting our head above the ocean of talented bands out there so that people know our name.”

S] There are two songs we’d like a little background on – ‘Dirty Little Dead Girl’ and ‘The Harbinger’ – can you talk to us about what experiences went into building those tracks?

J] “These are two songs from opposite ends of our writing process, at least lyrically for me. ‘The Harbinger’ is based on personal experience and is a heartfelt, meaningful song. It’s also one of our oldest songs. DLDG is a concept song, written for BYD. One where we decided we’d have some fun and write a song which is basically a filthily grooved song about vampire strippers and their clients!”

S] Is there a new song that you’re working on that you feel like perfectly defines where the band is musically, right now?

J] “We have a song on the new EP called ‘Where We Fall’ which basically sums up some of our experiences and wild times on tour. It absolutely stinks of theFALLEN party vibe in the verses and has a big chorus, this is something we love to get from most of our songs but for me this is a personal favourite at the moment. If I had a shot at showing someone a song to represent us, our shows – that would be it!”

S] How have you yourself changed and developed through the music that you’ve made with theFALLEN?

J] “I think this is a difficult question because the music you’re making constantly merges with your personal life and they sort of begin to feed one another. I think my writing has definitely improved and matured this last few years, and similarly I feel like a different person to the person I was a few years back. Your music builds an archive of the person you’ve been and the times you’ve had. It’s funny to dip back five years and see what we were writing and doing then. Seems like kids stuff now!”

S] If you could craft a Frankenstein’s monster from theFALLEN’s sound – say, the head of Papa Roach, the legs of Lostprophets and the arms of Anthrax, for example – what would it be, and why?

J] “You know what, you’re actually probably not far off the mark there, but I’d swap Anthrax for Avenged Sevenfold and maybe chuck in the gusto of Motley Crue for a the live party vibe. But I’d say that because these are all bands that most of us are or have been into at some point, and all of which have music which translates well to live performance. I wouldn’t have a problem if someone said we sounded a bit like any of those guys, and most often these are the bands we are likened to as it is.”