TalkSport’s Alex McCarthy on his journey into wrestling journalism, favourite chats and more

By Editor
By Editor December 22, 2020 Features, Interviews, News
No Comments

Alex McCarthy is a British wrestling journalist who currently works at talkSPORT as their US editor and is co-host of radio show talkWRESTLING. 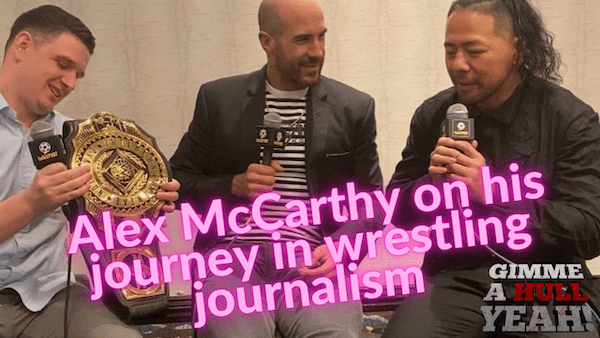 His path into journalism is like many, studying a sports journalism degree at university, before embarking on the search for full-time employment in the industry.

Careers in journalism don’t tend to happen instantly after you graduate, Alex was no exception to this, spending the first four years doing an array of “regular jobs”, before “It got to a point where I thought I can’t do this”.

His mum runs a college and this gave him the opportunity to enrol on an NCTJ course and gain more work experience in the industry, initially with a local newspaper and 442 magazine, then “the doors started to open” when he began contributing to GiveMeSport.

Alex’s first role with the company was as their NBA man, after which he covered all US sports – a position that allowed him to inform the company of his love for wrestling and his eagerness to cover it for them.

“18 months after that the opportunity came around to interview Sheamus”, he said. This opportunity was where his interviews with wrestlers began and “snowballed ever since”.

He was approached by talkSPORT to cover wrestling, allowing him to continue to interview the biggest stars in the sport, the views on his work created a huge audience for the company and they rewarded his efforts with a wrestling dedicated radio show.

Alex summarised his career so far by saying:

“The way my career has gone, there wasn’t a set path, there was no oh ill be a wrestling journalist like this, it just kind of happened.

“It’s not a conventional journey, if I were to give anyone advice, I would try get as much experience as you can early on and utilise those assets the best you can without a doubt”.

His love for wrestling began at the age of 10 or 11 when he started watching both RAW and Nitro on a Friday night, but it was one electrifying man who caught his eye.

“I just remember watching The Rock, I remember catching him and thinking I was so captivated by him, it’s hard to put my finger on it.

“I knew nothing about wrestling, all I knew was he was wildly entertaining, I thought he was so cool”.

Interviews with wrestlers are sometimes hard to come by, especially if you’re a fresh face in the wrestling journalism scene. Alex explained how some of his interviews come about:

“A lot of it comes down to building up a pedigree, building up a history of your work that causes the PR to want to work with you more, and of course on top of that you’ve got to have a platform.

“talkSport is a major, major platform in the UK so people want to work with you”.

He went on the say how important putting the work in is and how these interviews don’t just happen, but if “you’re prepared to put the time in and produce the goods then it will happen”.

Alex has spoken to some huge names from WWE over the years, the likes of Drew McIntyre, AJ Styles, and The Undertaker to name a few, but who has been his most interesting interview to date?

“The Triple H interview I did ahead of NXT TakeOver Cardiff, I think that still is my favourite to date, just because that was where a lot of people got to know me for the first time and it was a big opportunity, 25 minutes sitting down with Triple H – not many people get that”.

Getting the chance to talk to someone who you’ve idolised as a child is something many people would jump at the chance to do. With a list of huge interviews already under his belt, I was curious to see who Alex’s dream interview would be.

“The Rock is my number one (interview)” he said. “He’s the whole reason I fell in love with wrestling.

“At the same time, Vince McMahon, if you could sit down with that man for any extended period of time, I’d have so many God damn questions.

But he added he thinks The Rock would defiantly be his number one pick because of what he means to Alex’s career. He also mentioned that Owen Hart would be an interview he would’ve loved to do if he was still alive.

Wrestling is arguably at its hottest at the moment with almost every day of the week having a promotion or two promotions on air that day. I was curious to see who Alex thought was putting the best content out as a whole at the moment.

“As a weekly TV show, Dynamite is the best show”. However, this didn’t discourage his praise for how SmackDown is currently performing. “This is because they’re propped up by Roman Reigns and Sasha Banks, if you have those two as your focal point, you’re going to struggle to not have a great show”.

Booking a wrestling show, creating storylines, and making sure matches go smoothly is a job in itself, I picked Alex’s brains on who, if he could, would be his dream match or matches either through cross-promotion and/or cross brands.

“I still think Rock and Reigns is one of the biggest matches you could book in terms of mainstream appeal and heritage and all that great stuff” he said. In relation to women’s wrestling, he thought Becky Lynch v Ronda Rousey is probably “the biggest drawing one-on-one match that they could possibly make”, he added some great suggestions for cross-promotion matches, such as Cody Rhodes v Triple H, and Kenny Omega v Roman Reigns or Seth Rollins.

There’s no denying that to date Alex’s career has been an interesting one and his hard work in the industry has allowed him to live out his dream of interviewing huge names in wrestling, but what does he want the next steps to be?

He mentioned that he’d like to see his radio show talkWRESTLING being a brand of its own, allowing him to hire writers and others to work with him on it, he also added the show is only on catch up and he wants that to change too. His vision for the show is making sure it “grows to be as big as it can be” and it leads to opportunities for him and others.