Interview: The Naked And Famous

Home » Interview: The Naked And Famous

Soundsphere chats with The Naked and Famous’ bass player David Beadle about how the band feels about travelling far from their New Zealand roots, heavy influences and more… 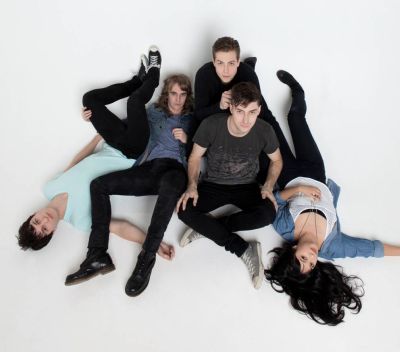 S] How does it feel to start touring other smaller areas in the UK, rather than larger cities such as London and Manchester? Was it important for you guys to tour the length and breadth of the country as much as possible?

D] “I guess so. In New Zealand we covered as much as we could. There’s basically five major cities we could play in, we had done that so the next logical step was for us to come to the UK. I’m just a complete ignorant tourist, I had no idea that York Minster was in York funnily enough. I guess it makes sense to do as much as we can over here as well. We are starting off playing smaller shows before the album is actually released, as there is only two singles released here so far.”

S] How have you goals developed over time?

D] “The band has grown from a four-piece to a five piece so the sound has become a lot bigger, it has changed in that respect. We are able to bring what Aaron [Short] and Alisa [Xayalith] were producing, up onto the stage. Our goals have always been to create music and to try to present it to as many people as possible. I guess our aim this year is promote ‘Passive Me, Aggressive You’ which is what we did last year in New Zealand.”

S] How have you developed musically since those early days?

D] “Like I said, it was a four-piece band before so it was more simple. We were influenced by listening to the TV On The Radio. So when the fifth member joined, and with the production Aaron and Thom [Powers] were bringing into ‘Passive Me, Aggressive You’, they really wanted to make it a really big, massive sound. So with that fifth member we were able to bring that out live, and that was really important to be able to translate what we could hear on the record out live.”

S] Your videos seem well thought out, such as ‘Girl Like You’ which stood out to me as being very quirky. How much input do you have with the videos alongside the directors?

D] “We work with Special Problems who are our official team, and have worked with us right from the start with the EPs and the first music videos. So they have created the videos, as well as the website and t-shirt designs. Our philosophy is that we are not visual artists and they are not musicians, we do the music and let them interpret what the visual aspect of The Naked and Famous is. So there’s always been a really good synergy, whatever we give to them they have given something great back, which makes sense to us. So we are really lucky to have those guys working with us.”

S] On the flip side, what have been the bigger challenges the band have had over the last year?

D] “Well for me, I was playing guitar for eight years before I joined this band to play bass guitar so I guess that was a challenge for myself [laughs]. I guess maybe rather than challenges, they served as learning curves for everyone. Like I said, Thom and Aaron are still learning how to produce the music, so it’s learning how to write, produce and, how to be better musicians.”

S]That’s an interesting point. Can you remember a time in the process when you thought circumstances were daunting and beyond what you guys have previously done?

D] “When we released ‘Young Blood’ in New Zealand, then it flew across the world in about two weeks to blogs and was being picked up, since then we’ve been just like ‘WOW’ every single day [laughs]. It’s one of those things that never gets old. It’s so strange and surreal, coming from New Zealand and having people on the other side of the world wanting to listen to your music, it’s a dream come true.”

S] What fuels your passion for amalgamating electronic and rock sounds which a lot of bands are doing now?

D] “I guess it comes from all our influences from all five band members; our main influence is alternative music in general. We all grew up listening to albums, specifically nineties alternative genres; Tool, Nine Inch Nails, Deftones and more, so that’s where you hear the heavier aspect of the music. The first two EPs had a Queen of the Stone Age influence, and Aaron and Thom initially bonded over Nine Inch Nails, that sort of heavily electronic produced music, so that’s what we’ve taken on stage as well. It’s a very similar live setup too to the Nine Inch Nails sound; analogue guitars, bass and drums as well as digital synths and electronic drums. So I guess that also comes from our influences through that era of music – like Massive Attack and Tricky.”

S] Is that something you have to fight against? You list bands such as Nine Inch Nails and Tool which have heavy sounds; however your sound is very accessible and poppy almost. Do you have to fight the urge to get heavier with some songs?

D] “No! The album as a whole encompasses everything. There have been comparisons that have been made like Passion Pit and MGMT that are all very flattering, we have all listened to those records. But I guess the flip-side of that is the rest of ‘Passive Me, Aggressive You’ is something that can be a lot heavier and a lot darker and a lot poppier at the same time – it’s a real mix. I guess the album as a whole encompasses everything we like about music [laughs]. Not just pop, not just rock, the darker and moodier side of electronic and rock production too.”

S] In a lot of interviews you guys have talked about how you have studied the music industry, and how it works, the backbone. Is that something you think a lot of bands miss out on, that they don’t really take the time to study the way things work? Do you think that lack of knowledge is a hindrance?

D] “I don’t know if it is hindering them, I don’t feel like I’m qualified to comment. Maybe when we are forty or fifty we could feel like we have learnt enough. The industry seems to be something that is constantly changing and there’s so many different opinions. You can’t go to university and learn the music industry; there is no degree on that kind of thing, so I find it hard to comment. Sometimes some things work for some and not for others.” [laughs]

S] Do you guys listen to a lot of other bands? Do you think it is essential to listen and take inspiration from others?

D] “I think it definitely is. That’s where influences come from and how art evolves over time, by taking influence from something else and changing it and altering it in such a way that it progresses into something different. So it is important to take influence from other artists.”

S] In terms of categorisation, how do you feel about the electro-pop label that you’ve been handed?

D] “There are certain songs we have that I guess are electro pop, but ‘Passive Me, Aggressive You’ and the first two EPs we would call ourselves alternative pop and alternative rock. I guess it depends on who you are talking to, if you say alternative music to a mother then she may think ‘a bit weird’ but like Marilyn Manson, to your everyday person, who might describe it as alternative pop music.”

S] Have your surroundings in New Zealand influence the writing process at all? Do you sit somewhere outdoors/indoors to write?

D] “We are all insular, introverted people so I personally never really leave my bedroom and I don’t like to get sand in my shoes from the beach [laughs] so I don’t know if the environment influences me. In terms of Alisa’s song writing and lyrics, it’s very phonetic and based on ideas, so maybe the environment may have an influence. She takes influence from maybe a movie or song, and I guess maybe walking around an environment as well.”

S] As an electro band, how do you feel about a studio environment in contrast to a louder noisier setting?  Is it important to perform or do you prefer the technical comfort of the studio?

D] “Aaron and Thom love being in the studio, we all do. Having access to all the technical equipment and to be able to create and to alter things, and writing in that environment is very inspiring. That’s a sort of place where things would make a lot of more sense. But the flip-side of that is that we all love performing live, that has been my dream since I was seven years old. So an important part of being in the studio is that we are able to bring everything that has been created in the there up onto the stage so that a live audience can hear what has been happening in the studio.”

S] Are you planning on doing some UK festivals? As much as you can reveal…

D] “I don’t know I would love to know. I know we are planning on doing some, it’s more of a matter of me needing to ask.” [laughs]

S] If you could have a listening party, a party with your music in the background, who would you invite and why? And what would you feed them?

D] “I don’t know [laughs], we played on the Big Day Out tour at the end of January and February in Australia, and Deftones and Tool were playing. Alisa ran up and gave Deftones a copy of our album and we are also massive Tool fans and we gave a copy to Diane Wood as well. I don’t know, LCD Soundsystem, Tricky, and Massive Attack. It would be amazing to have Tricky and Massive Attack there and LCD there, as well as Nine Inch Nails. I wouldn’t know what to feed them. Maybe some sort of roast meal, actually some Japanese noodle thing. I went to Camden and had some chicken and noodles and rice, maybe I’d just feed them that.”

S] If you could stick The Naked and Famous stamp on a film, what kind of film would you like to soundtrack?

D] “Maybe an ‘American Beauty’-esque film, not that film in particular, but something in that vein.”

For more information please go to the official website.