The Paddington’s Tom Atkin on success, and his return to music

To write music is to know yourself. With the release of Tom Atkin’s upcoming EP Lil Fucker – the first after a hiatus spanning a decade – a portrait has, at last, begun to emerge which embraces not only the desperate, kinetic energy of his time as frontman of indie innovators, The Paddingtons, but also something that cuts far deeper, bringing it to completion. Having weathered the storms of life, with his fair share of growing pains since the days of his twenties when you feel untouchable, this EP is no longer about a boy, anymore, but about a man; an artist; a singer-songwriter, and a father. 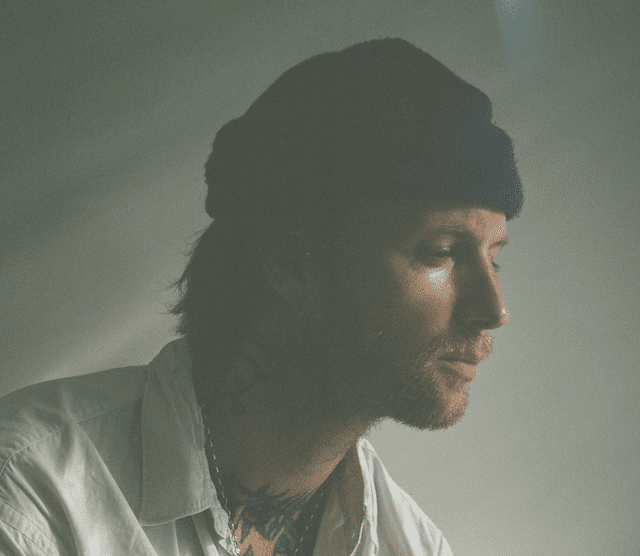 “One of the reasons why I’ve had such a long break from music is because I’d stopped believing in myself,” Atkin admits. “It’s fucking annoying, really, because now I’ve taken far too long to be doing this.” As much as there is that fresh flush of excitement at returning to what he loves, this feeling that he had somehow missed the boat is something he finds difficult to shake.

Cutting his teeth in The Paddingtons, who enjoyed a meteoric rise to success during the 2000s’ grassroots guitar scene, Atkins had toured with the finest Britain had to offer, from The Cribs to The Libertines. After their second record in 2008, No Mundane Options, however, the tide had turned. They began – as had many of those bands that defined that thriving indie scene – to fizzle out. Why? What always happens: life.

“The industry now, it’s a different ball game,” he says, since the days when seedy music venues were a social currency, with kids, armed with a printed copy of the NME, were queueing around the corner from HMV to get a copy of your CD. The truth, he tells us, is: “I miss being in a band with a bunch of my mates.” It was that feeling – magnified, as many of our emotions are in lockdown – that prompted him to finally do something with those songs he’d been sitting on for all those years. “I think without the pandemic, I might not have even done it.”

Our conversation is buzzing with an undercurrent of anxiety about the release of Lil Fucker. There seems to be a great deal riding on this for Atkin – not necessarily because the world is watching, but because for the last ten years, they haven’t been. But gradually, as ears are won over by this new sound, a departure from the frothier lager anthems from the days of The Paddingtons, people will be watching, and when they do, Atkin wants them to understand him, the man he has become.

“Maybe I’m being a little bit harsh on myself,” he admits. “But I guess I’ve just been on a bit of a weird roller coaster since then.” Of course, the biggest change, now, is that he is a father. “That’s probably the best thing that has ever happened to me,” he says. “There’s absolutely no downside to having a kid. It’s all positive, and it has been amazing. But it obviously takes away from you doing whatever you want to do in life. Like, in my twenties – not that my twenties were by any means normal – I could go to the pub whenever I wanted or take a nap. When you have a kid, you’re no longer your own first priority.”

Lil Fucker is the artist coming full circle; now his daughter is older, Atkin has the chance, through music, to no longer a stranger to himself. “Lil Fucker”, the EP’s lead single, is about “somebody who is close to me just looking me in the eye, trying to put me straight.” His voice still groans like a rusty switchblade, and the guitars are staggering and sharp, before bleeding out into a woozy wall of sound. He grabs himself by the collar with this new, punk-indebted – and largely experimental – style. “It’s just about me taking things for granted, and kind of losing myself a little bit,” he says.

It comes as little wonder that Atkin is influenced by the “pretty grim, pretty grey” oeuvre of filmmaker Shane Meadows, whose kitchen-sink realism of working-class Britain reflects Atkin’s own work. With his track “Honey, My Brain Fell Out”, there are reverberations of the Pixies and the unfettered, almost feral way they mined music from their instruments. “I think they’re very present in my music, and I will admit to that. I have no shame about that, either – they’re one of the greatest bands ever.” He continues, “The EP is a little bit darker than anything I’ve done before. It’s not straight-down-the-line indie like what I was doing with The Paddingtons.”

While Lil Fucker, as an entity, often explores matters of the heart (“I think most of the songs that ever get released are based around love, right?”), Atkins says, “It’s probably the most personal stuff that I’ve ever written to date.” It encapsulates those experiences falling in and out of love, as well as his ongoing battles with himself as a person and as an artist. “I’ve been through so many things since I was twenty years old,” he adds, and the EP is a documentation of that journey.

The most rewarding element of writing this EP, however, was forging a new bond with music itself. “I had a weird relationship with it, for a bit,” he explains. “I couldn’t really find myself. It felt weird to carry on without my best mates, you know what I mean? That was when we had my daughter, Lux, as well, which changed everything.” Taking that well-deserved hiatus to be a stay-at-home dad meant that Atkin had the chance to enjoy those precious days of watching his daughter grow up. “But as she got older, I got a little bit more freedom,” he says.

It began as a means of catharsis, writing down his feelings because that was the way he had always instinctively expressed himself. While he had tried other creative avenues, like photography, “it made me realise I don’t truly love any of that shit – the only thing I really, really enjoy and have a real passion for is music.” It made him appreciate being a musician again, only when he tried to imagine a world without it. “Nothing came close to the enjoyment of just sitting down, playing guitar.” The rekindling of this devotion to music has meant that already, Atkin has started making a record to be released next year. “I definitely won’t be leaving it that long ever again,” he promises. “I realised it’s never too late, you never run out of time to do what you love.”