The 00s were a critical time for black metal. The iconic early 90s Norwegian scene simply burned too bright to last long, swamped by controversies and media panic leaving a string of all-time classics and a legend that remains either awe-inspiring or unfortunate baggage for the genre depending on your view.

As its practitioners moved in very different directions and it moved deeper underground in the late 90s becoming a hub of fervent experimentation, the coming millennium and the digital era provided the tools and climate for black metal to step out of the shadows and diversify into shapes and forms never thought possible, proving beyond all doubt that it was more than just church burnings and Satanic circles. Here are ten of the best black metal albums the 00s had to offer. 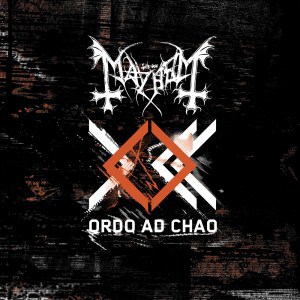 The treatment of Mayhem as a creative entity since the death of Euronymous is one of the greatest travesties in extreme metal. Despite being the single most notorious band of the Norwegian inner circle and having classic works like Deathcrush and De Mysteriis Dom Sathanas rightfully heralded, they’ve weirdly become one of the most underrated bands on the planet since then. With that insane legend behind them, it’d have been very easy for Mayhem to rest on their laurels and release De Mysteriis clones for the rest of their career, but instead they have continued to push themselves into deeper, darker and weirder territories as exemplified by this 2007 nightmare. Marking the return of vocalist Attila Csihar, Ordo ad Chao is an almost avant-garde plunge into the abyss, a bizarrely bass-heavy mix feeling almost like a subterranean lair for Csihar’s inhuman shrieks and devilish incantations. It’s intentionally jarring which will undoubtedly prove off-putting for many, but it’s a fine reminder that the old guard still had plenty up their sleeves.

Leviathan – Massive Conspiracy Against All Life 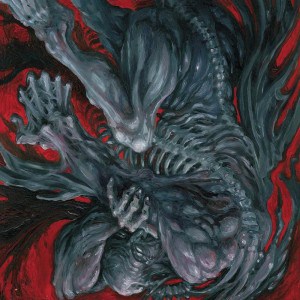 Music as hateful and frequently antisocial as black metal was always going to find its way into the hands of solo artists content to play and produce everything themselves, away from the prying and interfering eyes of the rest of the world where they are able to exert full control over their misanthropy. Leviathan, the project of Jef Whitehead aka “Wrest”, is maybe the most compelling of these, taking depressive and suicidal tones into altogether more horrifying places. Case in point is 2008’s Massive Conspiracy Against All Life. Previous full-lengths The Tenth Sub Level of Suicide and Tentacles of Whorror along with a seemingly never-ending slew of demos and splits were indeed sadistic and twisted works, but Massive Conspiracy took that same feeling and made it feel huge, granting a sonic weight and power to the style that few have matched. Black metal is music that revels in being isolated from “normal” society, and not many acts personify this quite like Leviathan. 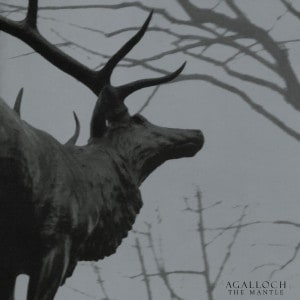 The 00s saw the rise of the US as a legitimate source of forward-thinking and excellent black metal, previously a distinctly European artform. Though the psychedelic meddling of Nachtmystium, Cobalt’s Hemingway and Thompson-inspired hybridisation, and the vitriolic nihilism of the DSBM bands made clear that the US was not a one-trick pony when it came to black metal, it was frequently American atmospheric black metal which made the biggest waves. Wolves in the Throne Room’s Cascadian black metal would dominate much of the decade’s latter half, and Agalloch’s blending of doom, neofolk and progressive rock into the mix would provide a sound not quite like any other. Every one of their five albums would go toe to toe with any other on this list, but for many The Mantle remains their definitive moment. A deeply naturalistic album that never truly explodes as one would expect but instead shimmers and sways eternally, evocative of the cold and wet winters of the Pacific Northwest that birthed it, it remains a beautifully immersive landscape fifteen years on. 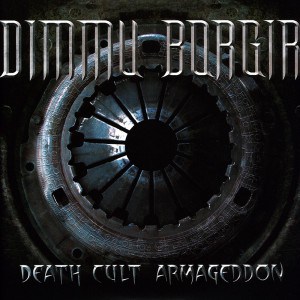 Finding their feet at the back end of the Norwegian boom and releasing some excellent albums in the mid part of the 1990s, Dimmu Borgir would truly spread their wings in the 00s and become one of the most high-profile bands to bring black metal kicking and screaming into the mainstream. The album with which they did it, 2003’s Death Cult Armageddon, remains their masterpiece. The big budget Hollywood blockbuster of black metal records (Progenies of the Great Apocalypse even found its way onto the Hellboy soundtrack), Death Cult Armageddon remains tremendously accessible and chock-a-block with earworms and yet almost impossible to comprehend in scope to this day. The muscular grooves and riffing of the band made Dimmu Borgir appealing to conventional metalheads who had yet to dip their toe into the foreboding tremolo-picked world of black metal, yet it still positively dripped with malevolent intent and grim icy menace. Atop it all, ICS Vortex’s soaring clean vocal lines were joined by one of the most colossal sounding orchestras ever found on a metal record. 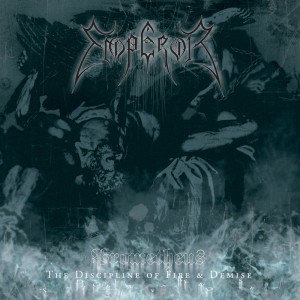 The final album from the greatest of the Norwegian black metal bands received something of a mixed response when released by an imploding band at the dawn of the decade, continuing to divide opinion to this day with even devout modern acolytes like Nightbringer clearly stating that it’s only the early works of Emperor from which they draw influence. In truth though Prometheus is one of the most bonkers and distinctly compelling albums ever released by a major name in black metal, the culmination of the evolution of a band who had always been revolutionary but never stopped pushing what extreme metal was capable of. Prometheus is cacophonous and dense to the point of being a headache at times, rammed with symphonic grandeur, ludicrous arrangements and the heaviest material Emperor ever produced. The band may have been essentially Ihsahn’s project at this point with its progressive spirit directly feeding into the frontman’s solo career, but it provided a perfect epitaph for Emperor, and when they were finally able to play the likes of In the Wordless Chamber on their 2006 reunion tour it sounded gargantuan.

Watain – Sworn to the Dark 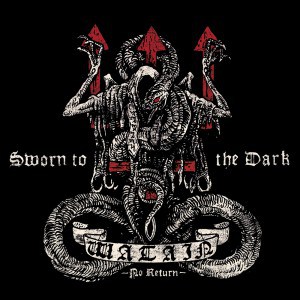 Watain remain one of the most important bands to black metal’s trajectory in the last fifteen years of its history, lighting a revolution comparable to those of Wolves in the Throne Room and Deathspell Omega. Bringing the breath-taking and serpentine melodies of the peerless and much-missed Dissection and combining with them with more of an outlaw rock ‘n’ roll spirit, Watain’s lustful and wicked prayers to Satan made them the leaders of a new deliciously evil movement in the underground that threatened to spill over and smother everything we hold dear in ritualistic fire and pig’s blood. Though their greatest works would come in the following decade (Lawless Darkness is every bit as perfect as any 90s classic you can throw at it), 2003’s Casus Luciferi and especially 2007’s Sworn to the Dark are the sound of a band setting their surroundings alight and refusing to let up until it had all burned to the ground. 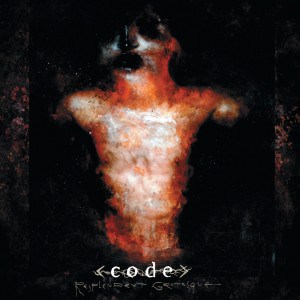 Beyond giving the genre its name with Venom and the odd isolated band like Cradle of Filth, the UK was once something of a wasteland for black metal with an almost total dearth of creative bands with a distinct flavour to them. The 00s changed this in dramatic style, with a new crop of bands no longer content to just ape their Scandinavian cousins with fresh and individual things to say. On Resplendent Grotesque London’s code delivered one of the most blood-curdling and unsettling takes, channelling the claustrophobic loneliness of an urban labyrinth as it ensnares the listener in twisted barbed wire riffing. Singer Kvohst adds a distinct touch of class and drama, lacing the record with sensational melody lines that elevate it to a whole different level, frequently soaring out of the gloaming only to be helplessly sucked down into it again. Once this record has its anguished hooks in you escape is hopeless. 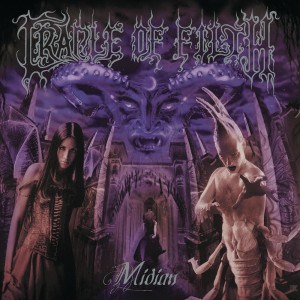 Even more so than Dimmu Borgir, Cradle of Filth have become something of a joke to many people as black metal’s very nature seems to reject anything that gets anywhere close to the mainstream, but it takes a special kind of band to bring music this ugly to the masses. Midian concludes a run of five near flawless records with which Cradle made their name, and even if it’s not necessarily the best one it certainly encapsulates the band like no other, as the band took their unique brand of black metal into even grander places. Their trademark sound of spiralling Iron Maiden lead guitars topped by extravagant symphonic parts that have been aped by so many and over the top gothic romance along with Dani Filth’s genuine star capability and a shocking aesthetic made Cradle the right band at the right moment to capture the public’s imagination, but songs like Cthulhu Dawn, Lord Abortion and Her Ghost in the Fog remain phenomenal to this day. 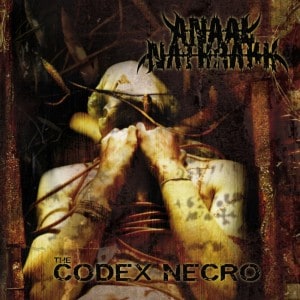 From the get-go, Anaal Nathrakh’s musical manifesto seemed to be to provide the soundtrack for the end times, the aural expression of the most animalistic and hostile base human desires. Their whole career has seen them finding new ways to push the boundaries of extremity, but their 2001 debut is the ultimate in nihilistic trauma, a 45-minute onslaught on the senses that batters and lacerates anything put before it. Its savagery is unparalleled, smashing together malicious black metal riffs, eye-popping grindcore intensity and harrowing industrial soundscapes to make songs like Submission is for the Weak, When Humanity is Cancer and Pandemonic Hyperblast as violent as seemingly possible. It’s not even a complete representation of the Anaal Nathrakh sound as it remains the only album of theirs not to feature jaw-dropping clean choruses that somehow don’t sap an ounce of the intensity, but it remains one of the most spiteful things ever put to tape, a masterclass in musical annihilation.

Primordial – To the Nameless Dead 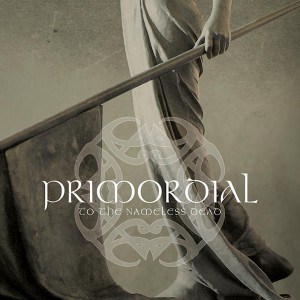 Black metal has always been swamped in the cultures of the lands that spawned it. In the case of Norwegian scene, this took the form of rebellion against it, actively desecrating the symbols of the Christian religion that had been imposed on their ancestors centuries before. Ireland’s Primordial represent not only the usage of elements of their native folk music adopting instruments and aspects previously considered totally alien to metal, but the moving in line of black metal with the folk tradition of protest songs as a means of expressing heritage while tackling social issues head on. Their sound is immediately recognisable, the compound meters of Irish trad channelled through thick-textured black metal creating something distinctly Celtic but a long way from jaunty, remaining grim and mournful yet never dreary. Alan Averill’s gritty and impassioned singing voice is one of the most compelling in any subgenre of rock music, holding a relatable everyman quality and yet staggering power as a rousing rallying cry. The overbearing bleakness of The Gathering Wilderness may well be their finest hour, but for its song-craft and the stirring might within To the Nameless Dead is a classic metal album in every sense.