Amplifest 2022 confirms, today, six new names for its most ambitious edition ever. Taking place on the first two weekends of October (7th to 9th October 2022 and 13th to 15th October 2022), the event that aims to bring new experiences and contact spaces with the most transgressive heavy music projects will bring to Porto: Midwife, Patrick Walker (40 Watt Sun), Vile Creature, Bruit ≤, Hellripper and Spectral Wound. We remind that ticket sales for FDS2 are still open on the event’s website. As far as FDS1 is concerned, a very limited number of tickets have been made available on the same website. 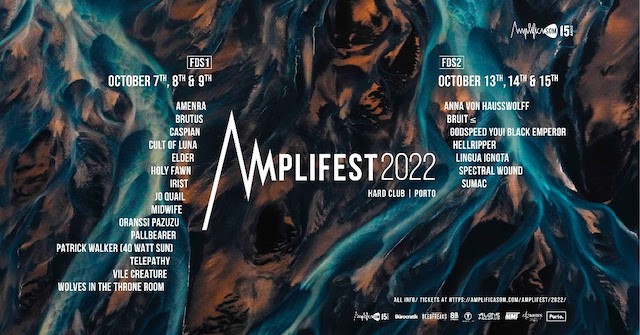 Nebulous and involving, the music of Midwife – the solo project of the American multi-instrumentalist Madeline Johnston – is, briefly and accurately, described by herself as heaven metal. In a tapestry built from the most phantasmagoric forms of dream-pop, drone and shoegaze, Midwife builds a unique language of disarming honesty, as is best demonstrated in her latest album Luminol, which carries the label of cult label The Flenser, and which will be at the center of her debut show in Portugal, set for the Amplifest 2022 stage.

40 Watt Sun are probably the best proof that there is a place for emotion and vulnerability in heavy metal, a language traditionally more associated with aggression and transgression. The Inside Room, the debut album of the British band led by composer Patrick Walker, saw the light of day in 2011 and has since gained the status of an absolute classic, particularly within the more emotional spectrum of doom metal. Presenting the new album Perfect Light, 40 Watt Sun – in its most intimate version, with only Patrick Walker on stage – will make their long awaited debut in Portugal at Amplifest.

The most experimentalist fringes of the doom movement have in Glory! Glory! Apathy Took Helm, the latest album from Vile Creature, is one of its most shining manifestations of recent times, where the seismic insistence of the riffs and rhythms concocted by the couple of KW (guitar and vocals) and Vic (drums and vocals) is masterfully tinged by the dirt of sludge and the scintillation of choral music. The duo from Ontario, Canada – which also stands out for its openly progressive and anti-oppressive political positions – will make its awaited debut in Portugal on Amplifest’s stage.

Bruit ≤‘s name is probably the best answer to any possible doubt one might have about the vitality of the post-rock genre. The Machine is Burning And Now Everyone Knows It Could Happen Again, the French collective’s first full-length, seems to be a future classic of the genre; the melodic heritage of GY!BE permeates the pieces, but the moments of intensity and fury, the subversion of the genre’s formulas and a superior level of composition elevate Bruit ≤ to a higher level than the vast majority of their peers – as will be confirmed on the occasion of their Portuguese debut at Amplifest 2022.

The feverish rock’n’roll of Motorhead, the black/speed metal of Venom and the mid-tempo passages of Celtic Frost are just some of the references that come together in the deliciously blasphemous concoction called Hellripper. The one-man project of scottish musician James McBain has in The Affair of the Poisons the most recent title of a discography that comprises some of the most authentic demonstrations of heavy metal revivalism of the last few years, and whose irresistible bangers will sound, for the first time live in Portugal, on Amplifest’s stage.

It is not surprising that the grounds of Montreal, Canada, where the ambient temperature often reaches several tens of degrees Celsius below zero, has sprouted a band as violently icy as Spectral Wound. Also drinking from the equally cold fountain of 90s European black metal, particularly from its more melodic style, Spectral Wound attests with the recently released third album A Diabolic Thirst that they are one of the sharpest edges of the current black metal panorama – a statement which will also be confirmed in the Portuguese debut of this devastating storm, scheduled for the second weekend of Amplifest 2022.

Amplifest will be announcing more news in the beginning of 2022. Details about the line-up, dates and other informations can be found in https://amplificasom.com/amplifest/2022/index-en.html.