Diamond-selling recording act AWOLNATION today announced the tracklisting for their upcoming covers project My Echo, My Shadow, My Covers and Me, now available for pre-order, which will include collaborations with Beck, Jewel, Portugal. The Man and more. Today they also released “Beds are Burning (Featuring Tim McIlrath of Rise Against),” a new track from the album. The album, which is set for a May 6, 2022 global release, is a fiercely collaborative and celebratory project, a collection of masterfully crafted and carefully curated covers, with each track featuring at least one acclaimed musical artist with whom AWOLNATION’s founder Aaron Bruno has a personal connection. After crossing paths over the years at festivals and other shows, the band joined forces with Tim McIlrath of Rise Against to give a futuristic, raw, and gritty twist to the 1987 Midnight Oil classic. See the tracklisting below. Pre-order the album across platforms starting today HERE. 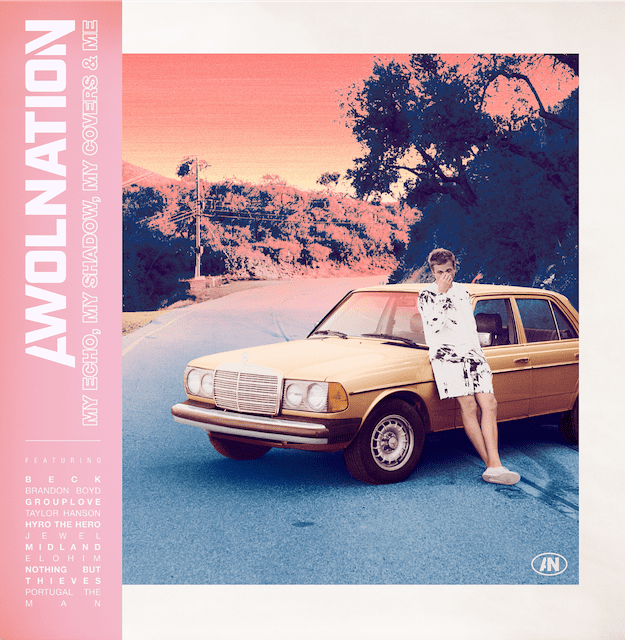 A hypnotic and visually stunning animated music video was also unveiled today to accompany the “Beds Are Burning” release. Showcasing a series of futuristic funky visuals, it amplifies the next-generation approach to the reimagining of the song. The credits for the project are as follows: Directed and Edited by Jason Michael Hall, CG Assets; Editing and Compositing: Gingerbear Haus Studio Motion Capture Performance; Actors: Aaron Bruno and Jason Michael Hall.  WATCH NOW.

Marking today’s release, Bruno gave a statement on what this song means to him, “Ever since I was much younger, I would sing along to this song. The singer may have the coolest dance moves in music video history. I think this song speaks for itself in terms of the message and meaning of the song. I was excited that Tim from Rise Against performed on this one in particular, given the power and influence his lyrics and music have had for so many years.”

McIlrath said of the collaboration, “When I met Aaron years ago at one of our shows at the Coliseum in L.A., he disclosed his past time spent in hardcore bands, and we bonded over that. I’ve always been a fan of his, both as a person and his music, so it was an easy decision to guest on his version of Midnight Oil’s ‘Beds Are Burning.’ It didn’t hurt that I also love the song and all it stands for. I’m really impressed with the ways in which he made it his own because it’s not an easy song to reimagine.”

Originally recorded by Midnight Oil, drummer Rob Hirst gave their stamp of approval, stating, “A tough new light on our old song! The whistle near the end is a deft touch…congrats AWOLNATION and Tim on doing a brilliant job!”

AWOLNATION’S first official offering from the project, a powerful reimagining of Scorpion’s “Wind of Change,”featuring Portugal. The Man and Brandon Boyd of Incubus, earned over 1M streams in its first month of release and was accompanied by a striking visual directed by Amalia Irons. The video’s imagery depicts waves of nostalgia, weaving together different scenes that explore the full spectrum of how the passing of time impacts everyone. WATCH NOW. In their exclusive reveal of the album’s title and release date, Billboard spoke with Bruno about his core mission for this collection of songs and collaborations: to illustrate the mental health benefits music brings and the connection within the artist community. Bruno will continue tackling this subject head on in a series of in-depth conversations with his collaborators throughout the album’s campaign.

Today’s release also comes with the official announcement that AWOLNATION is partnering with The Jed Foundation (JED) to continue having and amplifying these conversations about mental health that started during the pandemic. In 2020, Bruno started having organic, honest conversations about some of the mental health challenges the world was facing during quarantine. On his social media, he spoke with a myriad of artists across genres, many of whom became his collaborators on this project. These initial conversations sparked the partnership with JED, which is a leading mental health nonprofit. Both parties are excited to use the album release to continue shedding light on this important topic, and a portion of the proceeds from the album will go to JED’s mental health awareness efforts. More information about where and when fans can hear these conversations will be revealed in the coming weeks.

“Through our work, we see daily how starting conversations and sharing stories can break down the barriers and misunderstandings that leave too many people struggling in silence,” said John MacPhee, CEO of The Jed Foundation. “Music is such a powerful mental health vehicle and we are excited to partner with Bruno to amplify this impact.”

To follow the covers project, AWOLNATION is currently working on a new album with original music, after most recently celebrating the 10th anniversary celebration of the group’s platinum debut album Megalithic Symphony,which spawned the rare DIAMOND-certified “Sail”, and releasing their 2020 album ANGEL MINERS & THE LIGHTNING RIDERS. Featuring the hit single “The Best” and collaborations with Rivers Cuomo of Weezer and Alex Ebert of Edward Sharpe & the Magnetic Zeros, ANGEL MINERS was the band’s first album after signing to Better Noise Music and was praised by both critics and fans upon release.

MY ECHO, MY SHADOW, MY COVERS AND ME Tracklisting