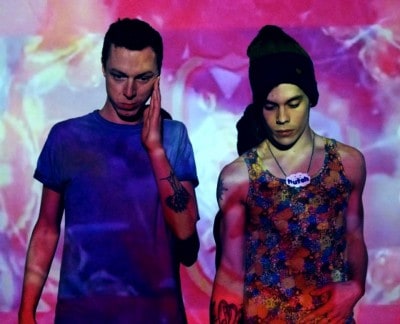 Throughout this collection, the band (made up of vocalist Hutchy Swango and keyboardist Jack Swango craft monolithic mega-disco soundscapes that smash at the senses and burrow into the brain pushing out killer hip-hop-style beats and massive pop choruses. Influenced by the sounds of their youth (a grimey diet of hard dance, hard rock and rap), ‘Banana Songs’ is the perfect introduction to the almighty aural explosion that is Haxby Swango.

Vocalist Hutchy comments: “This whole EP gives a very colourful picture of what this band is about, and it’s a very strong foot forward for us.”

The tracklisting for ‘Banana Songs’ is below:

Stream the band’s new track, ‘5Deep’ from the EP, below: