‘An Evening Of Burlesque’ at The Barbican in York

Direct from London’s West End, Europe’s biggest touring burlesque show is coming to York’s Barbican venue on November 10. Showcasing award-winning talent from across the country, it’s an opportunity to see some of the world’s biggest burlesque stars in the flesh. Theatregoers are promised corsets, killer heels and stockings aplenty. “An Evening of Burlesque features an all-star cast of beautiful and elegant performers,”  says show producer Michael Taylor. 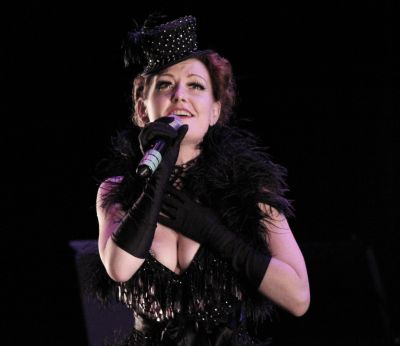 “Sparkling with couture costumes recalling the golden eras of burlesque, it’s the most glamorous show on tour.” Michael, who produces other hit stage shows ‘The Magic Of Motown’ and ‘Thank You For The Music’, says the production owes its success to a combination of “sultry vocals, breathtaking choreography, mischief, magic, frivolity and fun.”

“It’s all tease, no sleaze,” says Michael, “and for that reason audiences are predominantly female.” Bringing variety back to the theatre, the show’s combination of musical and theatrical parody, magic, comedy and dance with the art of striptease saw its extensive 2011 UK tour enjoy rave reviews. An Evening of Burlesque comes to town fresh from an international tour at the beginning of 2012.

“Its content – sparkling glamour, physical humour and a dynamic score need no translation,” says Michael. “There’s a thriving burlesque scene in London’s West End. We’re proud to be bringing the cream of burlesque talent to a far wider audience.”

Stars of An Evening of Burlesque include:

Amber Topaz – the Yorkshire Tease, the leading lady, her powerful vocals and an uncompromising stage persona are the epitome of burlesque

The Folly Mixtures – a burlesque quartet choreographed to thrill, featuring a tasty assortment of lip-smacking themed routines that have thrilled fans throughout the UK and Europe

Ivy Paige – the evening’s most welcoming compere, this songstress is a cabaret star in her own right

Liberty Sweet – sensuous and graceful, a nimble vamp, trained at the Royal Academy of Dance, comes with her own sparkle-encrusted swing. A star of the Edinburgh Festival and ITV’s Alan Titchmarsh Show!

Kalki Hula Girl – her explosive, show-stealing hula-hoop performances defy both the laws of gravity and impossibility, leaving audiences in an old-school vaudeville spin

“For over-18s only, ‘An Evening Of Burlesque’ will be the talk of the town for months to come,” says Michael. “Book your tickets now and enjoy the ultimate tease.”

For more information visit the official ‘An Evening Of Burlesque’ website.

an evening of burlesque yorkthe barbican