Baltimore, Maryland’s Angel Du$t have announced details of their new album ‘YAK: A Collection of Truck Songs’, which will be released October 22nd on Roadrunner Records and is now available for pre-order. The band have also shared the new song ‘Big Bite’, which is joined by a music video directed by Ian Shelton. 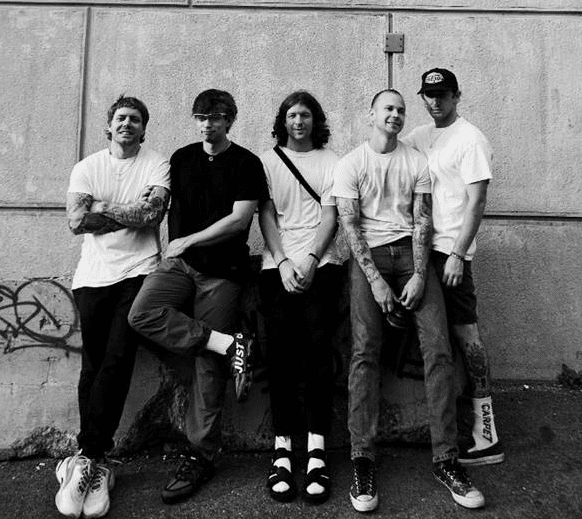 Vocalist / guitarist Justice Tripp commented, “People get really married to the idea of making a record that sounds like the same band. If one song to the next doesn’t sound like it’s coming from the same band, I’m ok with that.”

Put simply, Angel Du$t are the guys who do whatever you don’t expect.

Produced by Rob Schnapf (Kurt Vile, Elliott Smith), ‘YAK: A Collection of Truck Songs’ follows Angel Du$t’s 2019’salbum ‘Pretty Buff’, and sees the group channelling an anything-goes philosophy into their tightest, most forward-thinking material yet. Recorded over a two-month period in Los Angeles last year, the album is a rotating smorgasbord of percussion, guitar tones, effects, genres, and influences, fashioned in the spirit of a playlist as opposed to a capital-R ‘Record.’ The album’s 12 tracks span jangle-rock gems (‘Big Bite’), piano-spiked power pop (‘No Fun’), and a breezy duet with Rancid’s Tim Armstrong (‘Dancing On The Radio’).

‘YAK: A Collection of Truck Songs’ also features ‘Love Is The Greatest’, ‘All The Way Dumb’, ‘Turn Off The Guitar’ and ‘Never Ending Game’, all of which appeared on Angel Du$t’s 2021 EP ‘Bigger House’, an expansion on the foundation of their 2020 EP ‘Lil House’.

Breezy but determined as they imbue their laid-back acoustics with sharpness, Angel Du$t continue to prove they are band averse to boundaries. The band’s Roadrunner Records debut ‘Pretty Buff’ was produced by Will Yip and earned the band critical acclaim. Widespread international attention included UK praise from Kerrang! (“13 super-accessible, honest and artfully crafted songs… there’s lots to love about them”), NME (“the fun-first hardcore group bringing ‘90s pop-rock to the pit”) and The Line of Best Fit (“a cacophony of good times and soul”).

Angel Du$t will return to the road this week for a string of North American headline dates before jumping on a coast-to-coast tour alongside Mannequin Pussy. For more information on tickets and tour dates, please see www.angeldustmoney.com/tour.