Alt-Fest is a brand new radical alternative music and lifestyle festival that has been confirmed to take place on August 15, 16 and 17, 2014 at a 50,000 capacity site in the South East of England, to be announced soon. 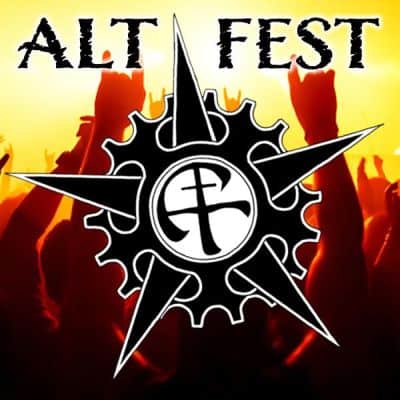 The organisers AC Promotions, an alternative clubbing and events company, who have been packing the crowds in at major nightspots across London for over 8 years, promise to curate a unique experience.

Alt-Fest will feature five live music stages, presenting crucial goth, metal and industrial acts, plus the “best-of-the-next” on a newcomers stage, and the absolute ‘best-of-the-best’ on a punter voted main stage line-up.

Alt-Fest will also present a massive clubbing marquee, to be hosted by a different event team each night, a circus big top, an alternative traders’ field, fairground rides and an artists’ village, showcasing installations, body art and sculptures taking shape over the weekend.

A large kids area, with crèche (rarely offered at mainstream festivals), will provide a dedicated area for festival going families throughout the five days of camping available.

What really sets Alt-Fest apart, however, is the innovative alternative means being employed to fund and determine the form. Alt-Fest will be the UK’s first ever crowdfunded festival, sourced and created by the crowd itself.

As well voting on acts to appear on the bill, festival-goers are stepping forward to volunteer the crowdsourced resources, labour and finance that Alt-Fest requires to be a truly punter-powered event, where ticket holders are fully invested in the decision making process.

Since Kickstarter’s site launched in America in April 2009, the site estimates that around 10 per cent of the films accepted into the Sundance and Tribeca film festivals this year were funded by Kickstarter.

Crowdfunding has already been adopted by a myriad of bands and artists to fund their albums, bypassing traditional record companies, but this is the first festival ever to be backed in this way.

Bands confirmed at the time of writing include The March Violets, Suicide Commando, The Fields Of The Nephilim and Front 242.