This weekend, MCM London Comic Con is giving visitors and fans of Marvel’s favourite mercenary, Deadpool, the opportunity to a worldwide exclusive hands-on preview of the upcoming self-titled videogame – Deadpool. In additional to this, gamers will be rewarded with a free Deadpool poster featuring artwork that has been specially created for the event by a Marvel artist. 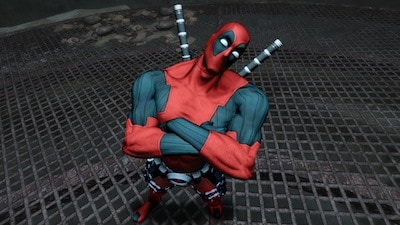 What’s more, those who pre-order Deadpool at the show’s Deadpool stand will receive a limited edition Deadpool t-shirt. Game will be taking the pre-orders, which includes a bonus challenge level in their exclusive edition of the game.

Fans of Deadpool will be welcomed to gather in front of the Excel Centre at 2pm on Saturday, May 25 for the very first MCM Expo Deadpool collective. Be one of 1,000 lucky people to snap up a Deadpool mask and help create the biggest group Deadpool photo shoot that MCM London Comic Con has seen.

Deadpool will be available in stores from June 28 for Xbox 360, PlayStation 3 and PC via Steam.  Rated PEGI 18. For more information, visit www.deadpoolgame.com, www.facebook.com/RealDeadpool, or follow on Twitter @RealDeadpool.