THQ Inc. (NASDAQ: THQI) today announced that the co-op mode for ‘Warhammer 40,000: Space Marine’, Exterminatus is available on Playstation3 and PC to download for free. The version for the Xbox 360 video game and entertainment system from Microsoft will go live soon. 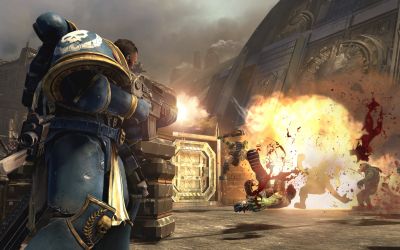 Players who log on to Playstation Network or STEAM will be prompted to download a small update which will add Exterminatus to the menu system and guide them through the add-on content download. The process for Xbox 360 will be the same when it goes live.

Space Marine’s Exterminatus mode pits an elite squad of four Space Marines against hordes of alien enemies in a score-based fight to the death. Players can choose the Tactical Marine, Devastator or Assault Marine as well as utilising any weapons and perks available to those classes.

Experience earned while playing this mode counts towards the game’s multiplayer ranks, allowing players to earn progression in both co-op and multiplayer. Jim Huntley, Vice President of Global Brand Management comments: “We are delighted to be able to reward the loyal fans of Space Marine with a new free mode to extend and enhance their game play experience. Exterminatus will provide a rewarding new challenge to players old and new.”

Space Marine’s Exterminatus mode is available to download for free on the Playstation 3 computer entertainment system and Windows PC. The Xbox 360 version will be available for free soon.