Two episodes of top-rated Challenge TV show TNA Impact Wrestling will be recorded at Manchester Arena on January 25, 2013 – the first time TNA has ever filmed the programme in the UK outside of London. 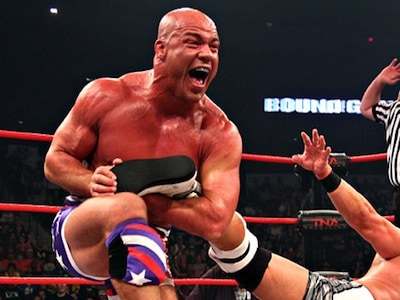 The event will form part of the TNA ‘Road To Lockdown Tour’  of the UK which also features huge live shows in Glasgow (Jan 23), Nottingham (Jan 24) and a previously announced double TV taping at London’s Wembley Arena (Jan 26).

The Manchester and Wembley shows will air over a period of four weeks on Challenge TV in February, as part of the channel’s special “TNA in the UK” month. They will also be broadcast on Spike TV in the US and in more than 120 other countries around the world.

To celebrate the news, TNA Impact Wrestling has teamed up with gigsandtours.com to waive the booking fee on tickets bought throughout the rest of October for TNA’s UK January Tour dates.

The offer is open to those booking via the dedicated web link www.gigsandtours.com/go/TNAOffer or the ticket shop on the TNA Wrestling UK Facebook page at www.facebook.com/tnawrestlinguk.

Impact Wrestling will also be running a competition to find the best fan signs brought to the UK events, with one winner at each show receiving an exclusive backstage pass.

Dominic Wilkins, Acting Director of Challenge TV, said: “Impact Wrestling is a huge hit with Challenge TV viewers so it is with testament to this bourgeoning UK fan base that TNA is filming two more shows in Manchester, as well as two at London’s Wembley Arena.

“Viewers will be able to catch these four new programmes as part of our ‘TNA in the UK’ month during February. They will follow on from the premiere of the exclusive new series TNA Wrestling: British Boot Camp which airs on Challenge during January 2013.”

TNA President Dixie Carter added: “I’m so excited for the rest of the world to see how loud and crazy the fans in Manchester are. We’re going to have some fun!”