Iron Maiden today announced that they will headline Download Festival on Saturday June 15,  2013, bringing their Maiden England tour to Donington Park on the 25th  anniversary of their first headline performance at the legendary home of rock in 1988 when an astounding 107,000 fans turned out to see their spectacular Seventh Son show, still the highest ever attendance there. 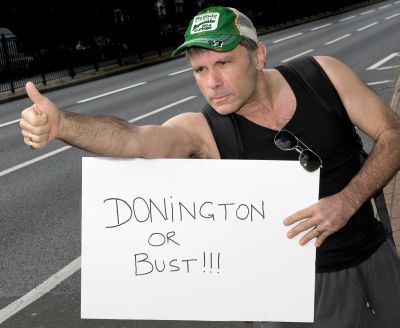 This will also be a record fifth time that the multi-million selling British rock pioneers will have topped the bill at Donington, following two Monsters of Rock performances (1988 and 1992) and two spectacular Download Festivals (2003 and 2007).

Frontman Bruce Dickinson says: “We’re absolutely over the moon to be headlining Donington again. The idea of returning exactly 25 years later with a show inspired by that same 1988 Seventh Son Tour, was too good an opportunity to be missed! And, thanks to modern technology, we’ve been able to update and improve on the original production. We will be bringing a huge new lightshow, stage set, various incarnations of Eddie, plenty of pyro and allkinds of other exciting stuff for the fans. And of course treating the fans to lots of their favourite songs from that period! We’ve had many great times at Donington and there is always a wonderful mix of bands and a really wild crowd who love their metal, all of which makes for a memorable show and fantastic party atmosphere!”

Iron Maiden recently completed the hugely successful North American leg of their Maiden England tour, with a set-list and production based largely on the band’s live concert video filmed in Birmingham during the Seventh Son Of A Seventh Son Tour in 1988.

Widely considered one of the most important rock acts of all time, Iron Maiden have sold almost 90 million albums worldwide, played over 2000 live performances across 58 countries around the globe, and released 15 studio albums including the most recent, ‘The Final Frontier’, their biggest ever chart success attaining No.1 positions in over 28 countries.

Andy Copping, VP of Promotions at Live Nation commented,  “I am delighted to see the return of Iron Maiden to Download next year to mark the 25th anniversary of their first playing at Donington. They are without doubt  one of the biggest bands in the world and their live shows are legendary. I caught them in Los Angeles and the audience reaction to the stunning stage production and incredible set-list was just phenomenal to witness. After watching rare performances of songs like ‘Afraid To Shoot Strangers’, ‘The Prisoner And Seventh Son’, alongside classics like ‘The Number Of The Beast’, ‘Aces High’, ‘The Trooper’ and ‘Fear Of The Dark’, I can’t wait to see this show again at Download 2013. It is sure to be something really special.”

Download 2013 takes place at Donington Park from June 14-16. Weekend with camping tickets go on sale 9.00am Friday, September 28 from www.downloadfestival.co.uk.

Vodafone customers can buy tickets 48 hours before they go on general sale: 9.00am Wednesday, September 26 at vodafone.co.uk/vip.