In a word: why? On paper, this was a good event in the planning at least to me. Kurt Angle is one of my favourite athletes of the previous 20 years, so his farewell tour is a no brainer, compound that with the fact the show was to feature some of my favourite talents such as EC3 and Matt Hardy as well as what I consider the greatest British talent of the contemporary era, both Grado (here as Odarg) and a man I have personally met and career I have admired since 2012, Kent’s own (but announced as a Londoner) Jimmy Havoc. 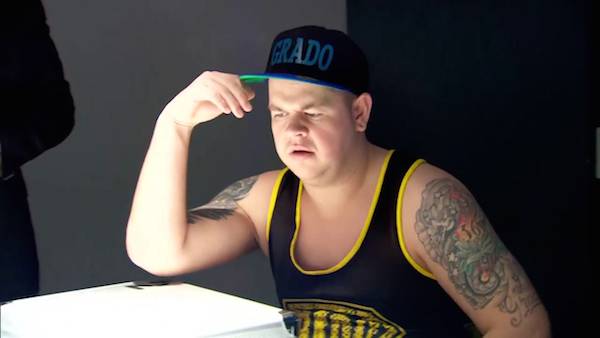 As the old saying goes, the best laid plans of mice and men often go awry and awry they really did. The first I place all the blame on myself. I often seem to be served at live events (American Football, gigs, wrestling shows etc) exclusively by the one person in the venue who couldn’t rub two brain cells together to make a third. When the door opening time had passed, he was adamant we could not go to our seats, offering no explanation for this. In my case, Dyspraxia does not lend itself to standing too long, so for most this would mean nothing, but I know fellow Dyspraxics and others it would negatively impact (pun unintended).

But this follows into another massive criticism I have of Total Nonstop Action Wrestling, that they seemingly are incapable of basic organisation. The company it seems did not give any staff at the SSE any vague idea of the show itinerary, even down to basics such as the times the matches would end as this was a super show taping for two PPV matches, an episode of Impact and obligatory dark matches. This may seem a petty criticism, but this lack of seeming organisation made me have to miss the two PPV matches of the night which I was looking forward to as I had to get the last Underground Train back to my home. Many American import sports events take this into so much account that this would be a non issue with any other company.

Another large criticism is that the arena’s configuration didn’t lend itself to being able to sell out. There were simply too many seats at around 1,500. No wait, that’s a pathetically small amount. Any other event that has their tickets on sale for months before it starts sells out, even the Jacksonville Jaguars who can barely give away tickets when they play at home, fill Wembley Stadium to capacity when they play in London. To me, this just demonstrates how badly TNA are performing worldwide and unlike so many other bands and sports, installs me with hardly any confidence for future performances.

The Stars performing did, as I and hopefully all in attendance expected, put on great performances. Kurt Angle was arguably chief amongst these, but if I am brutally honest, his entire match, rather than being something of a best of featuring well loved spots, just seemed like a lazy re tread of his matches in WWE and TNA. My personal highlight of the night, Jimmy Havoc, did put on a very entertaining match, however it was mostly a spot fest against Abyss so was not exactly difficult to call in the ring or perhaps even improvise once it is established who will ultimately be going over and who will eat the pin. The match did feature some psychology as well and gigging was kept strictly out of it, so thankfully it did not go for easy ways to get over with fans.

Grado was as ever, on spectacular form. On a personal note, I immensely enjoy seeing a deeply unfit guy at the top of the British Wrestling scene. I think perhaps this was one of the largest collections of people singing Like A Prayer by Madonna outside of a concert by Madge herself.

It must be mentioned that despite my criticisms above, it is a point of pride that an American sporting organisation will run a meaningful episode of their flagship show as well as tape extra matches here too. Of the live events I have been to over recent months and years, be they sports, gigs or other promotions such as WWE and NXT, they are all glorified exhibitions which may as well have never taken place. WWE themselves haven’t put a main show on in Wembley since Summerslam 1992, the UK Raw/Smackdown and briefly, UK Pay Per Views almost don’t matter, something which shows in their lack of production values. Those on display at this event, while they will never rival those of Wrestlemania and were perhaps even closer to the ECW on TNN days, they were consistent with their established brand.

Such an event, though flawed and did make me wonder how bad most non WWE companies must be if this is supposedly their superior, does make me feel that the jury has not reached its final verdict on whether or not this event (and TNA in general) are truly an example of a ship slowly sinking into the sea of irrelevance.