Bloodstock has announced another handful of bands for the Sophie Lancaster Stage at Catton Park. 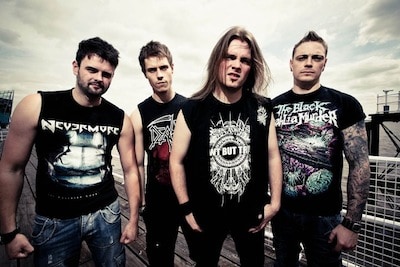 Manchester’s Absolva bring their inspired and modern take on classic British metal to the festival on Friday. Formed last Spring by two ex-members of Fury UK, the band are ready to bring tracks from their current ‘Flames Of Justice’ album to the Catton Park faithful.

Also picking up a Friday slot are thrash/speed aficionados, Shrapnel. Citing influences from Slayer and Testament to Exodus and Megadeth, this five-piece wrecking crew are going to fit right in on the 2013 bill, so come and wreck your neck to them on Friday afternoon. In the interim, check out the lyric video for Titan bloodstock.uk.com and look out for debut album, ‘The Virus Conspires, coming soon.

Saturday sees the addition of London-based death metal up-and-comers, Unfathomable Ruination. Drawing inspiration from genre luminaries, Death, Suffocation and Dying Fetus (who they’ll share a stage with), their self-titled EP drew much acclaim and has helped establish the band as one of the most promising death metal acts on these shores. Check them out tracking 2012’s ‘Misshapen Congenital Entropy’ release in this studio clip. Also added on Saturday are road dogs, Sworn Amongst (pictured). These guys tour relentlessly, having racked up stints with Annihilator, Bonded By Blood, Evile and fellow BOA 2013 alumni, Gama Bomb and Breed 77.

Sunday sees the addition of downtuned metallurgy of Welsh outfit, Lifer. Laden with southern doom, stoner rock, thrash and punk influences, Lifer return to Catton Park having made their BOA debut as a breaking band in 2011.

Also crashing on to the Sunday bill are ‘on a roll’ hard rockers Neonfly. They also make a return visit to Bloodstock, having first appeared in 2010, and they warm up for the 2013 event by supporting last year’s Bloodstock Sunday night headliner, Alice Cooper on his German dates this month. Also tipping their hat to the monsters of hard rock, States Of Panic (formerly known as Peepshow) blend old school, electronics and contemporary metal to create a modern, hybrid sound. Their aggressive, high-octane show channels the self-destructive spirit of the New York Dolls with a hefty dose of anti-establishment rebellion a la ‘Appetite…’-era G ‘n’ R.

Last but not least, atmospheric five-piece, Bossk join Sunday proceedings. Reforming after a few years off the grid, the band are back and garnering more attention than ever with their epic soundscapes and crushing riffs.  The guys have been keeping a busy live diary while they write their new album, and recorded a live session at the world famous, BBC Maida Vale studios last Spring.

Bloodstock tickets are on sale now, priced £125 (plus booking fee) for a weekend pass with camping.

A limited amount of one day tickets are currently on sale, and the last batch of VIP ticket packages and upgrades are also up for grabs.

Look up all the info on Bloodstock 2013 so far, plus all kinds of cool coverage from 2012’s event over at bloodstock.uk.com or the official Facebook page.