From playing Glastonbury and Ronnie Scott’s to miming on children’s television, musician turned comedian Rosie Wilby looks back at the emotional rollercoaster of chasing stardom at the heady height of ‘Britpop in How (Not) To Make It In Britpop’ – a revised version of her acclaimed 2011 Edinburgh Fringe show ‘Rosie’s Pop Diary’. 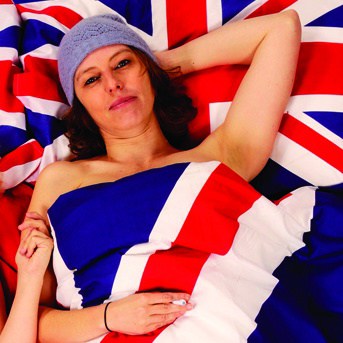 Mixing stand up, storytelling and songs, Rosie delves into a personal treasure trove of old photos, fan letters, lyrics and reviews to trace the weird and wonderful story of a singer that nearly made it – from bizarre auditions, supporting Bob Geldof and Jamie Cullum to walking barefoot along one of London’s busiest roads just because it would make a good album cover.

As Pulp, Blur and Oasis were making headlines, Rosie’s house and belongings were literally going up in smoke, just days before her big album launch, as her house caught fire. Homeless and without any Cool Britannia clothes, Rosie thought it couldn’t get worse until a friend donated an old Brownie uniform for her to wear at her own gig.

Rosie has appeared as a roving reporter on 5 Live and as a guest on BBC Radio 4’s Midweek, Loose Ends and Woman’s Hour, LBC and BBC London. She was a finalist at Funny Women 2006 and Leicester Mercury Comedian of the Year 2007. Her previous solo show ‘The Science Of Sex’ won a Fringe Report Award and was a sell-out at Cambridge Comedy Festival, Camden Fringe and Liverpool Comedy Festival – she was asked to revive this by The Einstein Area at this year’s Green Man festival in Wales. Still a passionate music lover, she writes for award winning-website musicOMH.com and has previously written for the The Guardian, Time Out, Ham & High and The Pink Paper.

In 2011/12, ‘Rosie’s Pop Diary’ also visited Buxton Fringe, Oxfringe, Birmingham and Manchester Comedy Festivals, Meadowlands festival and the Polari literary salon at the Royal Festival Hall. An accompanying book entitled How (not) to make it in Britpop is in development.