Something Alternative: A call to arms – where are all the rebel grrrls?

Home » Something Alternative: A call to arms – where are all the rebel grrrls?

Revisiting my childhood home recently, I found boxes of old newspapers which my dad had kept hidden away in the loft. Among the local newspapers and old copies of NME was a mixtape which my Auntie made. On it were bands like Bikini Kill (pictured), Babes in Toyland, Bratmobile, Garbage, L7, Skunk Anansie and more. Not only that, but she had drawn an image of Kathleen Hanna on the cover. 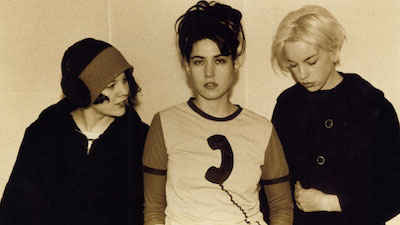 In 1994 listening to music meant lovingly drawing, taking the time to write, cutting, pasting and creating mix tapes, later CDs and zines which were photocopied and distributed among friends. This was a widely practiced task among music aficionados, and going back to the tape, this act was often characterised as part of the Riot Grrrl ethos. A movement that sought to educate, inspire and most importantly, encourage the idea that your output was worthy, while symbiotically arising from a passion for music.

When you read magazines nowadays about women in music, (if you can find them in the first place), you have stylish, young waifs sporting ironic band t-shirts, wafting around like Lorde or Haim, who look more at ease lounging around in Topshop than fronting a band.

You can’t help reflecting that if these bands were to have existed twenty years ago, they would not have been given a voice. Deemed too insipid to compete alongside their more outspoken counterparts. But now the problem lies in that they’re not given a voice, simply because, they’re just not. Because for whatever reason it’s image that sells, not opinion.

Women in rock face many challenges. The first is that they are used to receiving derogatory opinions thrown at them not because people don’t like their music, but because of how they look. It’s a constant critique not just in music but across the media. But when confronted with the fact there are so few women fronting bands compared with men, how can this not be due to criticism on how they look? And if they don’t receive a barrage of abuse – or just as badly – garner praise for their appearance, they are all too content to keep quiet.

The launch of Spotify has meant that more than ever, new avenues of music are opening up, whether it’s a new wave of 90s revivalist bands like Wolf Alice, Sisters and Honeybee, or the gothic sounds of Chelsea Wolfe, Esben And The Witch and Zola Jesus to countless acts including Angel Olsen, The Joy Formidable, The History of Apple Pie, Halestorm, Vier, Blood Command, Marmozets… there is a seemingly endless talent pool which has enough of a commercial profile. This is great. But what is missing is the attitude, the opinions and the swagger. Without a voice, when it comes to the web’s here today, gone tomorrow mantra – these acts will disappear as soon as the next ‘hot’ thing comes along.

In today’s world, where there is a standard 15% gender wage gap, where women are objectified more and more in media and where there is a seemingly accepted norm that women are second class citizens – especially in professions deemed ‘male’ like sport or music – surely, now, more than ever, there’s a need to challenge these accepted norms? And maybe, just maybe, women in music today are just utterly blasé, perhaps their pursuit is as we should believe, for fame and money and gratification based on being told how beautiful they are… but that’s not the case is it?

I fail to think for one second that young women today are just not interested. The move to social media has shown that when it comes to discussing topics like feminism, the fourth wave is thriving. In literature Helen Walsch, Zoe Pilgner, Laura Bates, Emma Jane Unsworth and many more are flying the flag for strong female leads in novels – and these women are all considered intelligent mouthpieces in their own right. But where are the musical equivalents?

We need more women take up the Kathleen Hanna mantle not just in performance, but in interviews and in the media. For girls not to just take up their guitars but to be outspoken, to be this generation’s Shirley Manson or Lauren Laverne, unafraid to make bold statements and more importantly to have their opinions heard. Pussy Riot are the only band who have done this in recent years, but for those that don’t want to be associated with the Femen movement there are few alternatives.

It’s no longer a question of needing to reclaim a tilting power balance, one which is heavily swayed in favour of the boys in bands, but it’s a call to action to challenge the gross misinterpretation that women should be seen and not heard. Without these young rebels, I doubt anything will change.