As part of our new Something Alternative blog, Harry Houghton returns to a wrestling event (a Smackdown taping at the O2 Arena on April 23, 2013) after 15 years away! 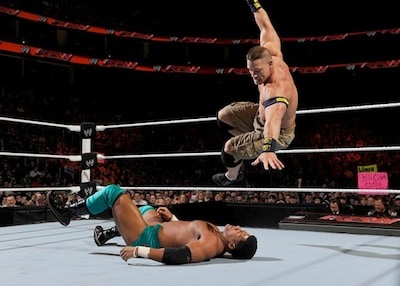 Having not watched WWE for about 15 fifteen years, I wasn’t sure what to expect, but when myself and my “tag team” partner George turn up and take our seats, we are whisked away by the buzz in the arena, with die hard fans chanting before the event has even begun.

It’s not too dissimilar to a football match in terms of atmosphere, and speaking to people around us they explain that the crowds in the UK are much more vocal than in the US, and the wrestlers enjoy bringing the show over here. The set is quintessentially British, with two huge Union Jacks either side of the stage with a red telephone box and a Hackney carriage either side.

The night is broken up into three sections, Saturday Morning Slam, Main Event and the television tapings for Smackdown. The earlier fights in the night are all between wrestlers who are new to me, but the one who stands out most to us is Santino Marella. He seems to be a crowd favourite, and his entrance riding a Boris bike around the ring was pretty entertaining.

To kick off the Smackdown section of the evening, Lilian Garcia enters the ring to introduce the event and performed an incredibly American version of the UK national anthem, which being completely honest, is cringeworthy. But we are soon back into the swing of things with a match between Jack Swagger and Alberto Del Rio, which also involved a good old fashioned ladder!

By this time, we have seen around five fights and were starting to get a feel for it and began rooting for Jack Swagger in the next match, partly because an eight year old boy named Alfie behind us seems to like him.

We are then treated to a divas match which involves some almost softcore porn like gestures to the crowd when entering the ring. This is followed by a match involving Fandango, who’s theme tune (‘ChaChaLaLa’ by Jim Johnston) has been in the iTunes charts, and youtube clips of people dancing and singing his theme are incorporated into his entrance video, which really seems to be a phenomenon that has taken the sport by storm and fans literally go mental for him. His entrance is made all the more elaborate by him samba dancing his way to, in and around the ring.

The evening is very segmented and runs to a very strict schedule, with advertising breaks perfectly placed to allow enough time to visit the bar/food stands as is the norm in other American sports such as NFL. The term “sports entertainment” is branded around a lot, and that’s exactly what it is. It may be a soap opera aimed at men, with heavily choreographed fights, but they are extremely good at what they do. The gymnastic moves that these giant human beings perform are even more impressive in the flesh.

The other thing we notice that was when watching on TV, the commentary keeps the level of excitement constant and overdramatic cut aways to backstage where a brawl often breaks out are as much a part of the show as what goes on in the ring. That’s not to take anything away from it. It is what it is, which is sports entertainment. It’s simple, but highly effective entertainment. There’s drama, tension, violence (albeit choreographed), and quite often an underdog or a battle between good and evil, or a crowd favourite and a pantomime villain.

Other highlights of the night include a battle between two UK wrestlers, William Regal from Blackpool, and Wade Barrett from Preston, who is also the current intercontinental champion. They are every bit as good as their American counterparts from the trash talking before the match, to the wrestling itself. Finally we get to see my favourite wrestler, The Undertaker. He is matched up against Dean Ambrose from a trio of wrestlers known as The Shield. The Undertaker’s intro is as epic as I remembered it, but I am shocked to see he now has a shaved head and is 48 years old! That didn’t seem to affect his ability in the ring as this seemed the most high tempo and longest fight of the evening. He wins by submission, and then was set about by the other two members of The Shield, before another of my favourites a returning D-X came in to save the day! Epic!

The night is rounded off with another dance from Fandango which resulted in fans singing the melody all the way to the tube. Yes, it may be choreographed fake, soap opera like and a little cheesy, but it certainly was exciting entertainment which is undoubtedly massively popular hence it being held at the 02 arena, and thousands of people from children to fully grown adults going and enjoying the event.