On Friday April 11, 2014 alternative music publication, Soundsphere magazine will be working alongside The Duchess team to promote a special showcase event aimed at promoting the very best in rock music around Yorkshire. 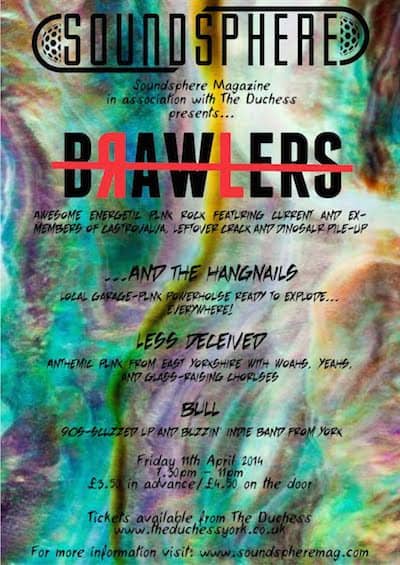 The headline act for the evening will be Alcopop! Records’ new signing Brawlers (pictured) which features current and ex-members of some of Leeds’ most iconic alternative acts including Harry Johns of Dinosaur Pile-Up and The Old Romantic Killer Band, as well as Anthony Wright of Castrovalva. Vocalist Harry comments on Brawlers’ part in the showcase: “We’re incredibly excited to come and play York. It’ll be a first for the band and we’re super happy its with Soundsphere as they’re a publication that has always been great to us and our previous bands – a great bunch of people with solid values and intelligence. Having said that: let’s get wrecked!”

In support will be some of York’s freshest and best known talent in the form of energetic garage rock two-piece …And The Hangnails, and up-and-comers Bull. Also on the bill will be Hull-based pop-punk outfit Less Deceived.

Soundsphere magazine editor, Dom Smith says that York’s music scene has never been stronger: “We’re in a very fortunate position to have lots of dedicated promoters of live music in this city, and it’s cool to take inspiration from them once in a while and put on a show with the almighty Duchess venue behind us.”

The Duchess’ Events Manager, Dean Shakespeare comments on the strength of the line-up, and the excitement within York’s scene at the moment: The Duchess already host many shows and is renowned regionally and nationally for the high standard of artists playing the venue, this alongside the musical talent and international exposure Soundsphere magazine brings to the table. Really makes us look forward to a continued partnership.”

Soundsphere magazine, in association with The Duchess present Brawlers, …And The Hangnails, Less Deceived and Bull. Friday, April 11 7.30pm through until 11pm.

Tickets can be purchased in advance from The Duchess’ website for £3.50 or £4.50 on the night of the show at the door.