What do Band of Skulls, Dan le sac vs Scroobius Pip (pictured), Jamie Lenman and Gorgeous George all have in common? 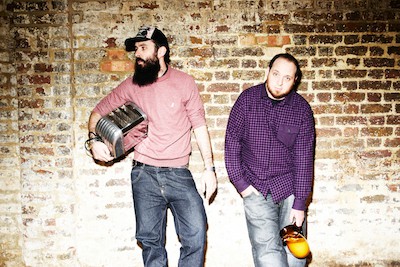 They’re all headed to Upcote Farm’s 2000trees Festival, of course. Infamous amongst alternative music lovers, the event takes place in Gloucestershire farmland every July, and this year Soundsphere are packing their tent to join them.

Now in its eighth year, 2000trees prides itself on supporting independent and new music in a festival industry which so often eschews less well-known names in order to draw the bigger crowds (and ticket prices). Winning a Grass Roots Festival Award in both 2010 and 2013, the underground reputation of the event draws a crowd of music gluttons who want to savour a feast of sound without the commercialisation of larger festivals.

This year Frightened Rabbit, Public Service Broadcasting, Blood Red Shoes, The Bronx, Tall Ships, Lonely The Brave, Wolf Alice and over 80 more acts will grace the four stages. Die-hard fans will dance alongside festival virgins at the Main Stage, The Cave, The Axiom, and The Croft – the latter two named after former music venues, keeping the festival true to its independent ethos. A new Forest Sessions area will also hold twenty acoustic acts for the essential festival chilled vibe.

The festival prides itself on the small and intimate vibe, deliberately restricting tickets to just 5,000 every year. To see the full line up and get your hands on the final few tickets, visit www.2000treesfestival.co.uk. We’ll see you there!