LA-based punk quintet Spanish Love Songs have today released two tracks, one is “Phantom Limb”, a b-side from Brave Faces Everyone and the other, a wonderful cover of “Blacking Out The Friction”, the bands favourite by Death Cab For Cutie. 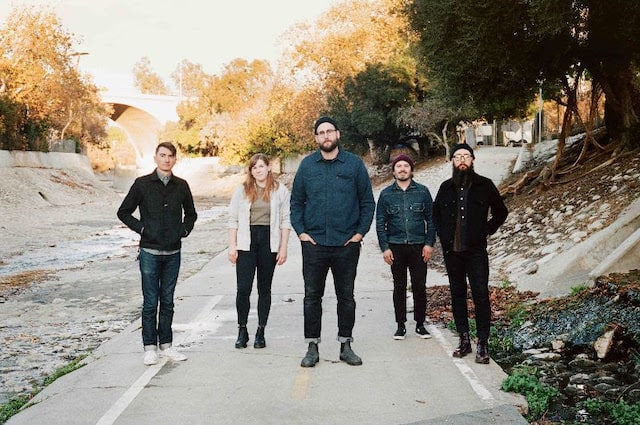 “We wrote 13 songs for the album. Recorded 11. And 10 made the cut. Phantom Limb is that extra song (and weirdly, it had this title before being left off).” says singer Dylan Slocum.   “We all love the song. Thematically it ties into the story of the record well but when we received the final mixes back and I started sequencing the album in my head, I just couldn’t hear a place for it in the context of the entire album. Whether it’s foolish or not, I still believe in “the album” as a form, so I decided to cut the song.

It’s less of a throwaway b-side and more of a companion to the album. And for a song about loss & missing someone dearly — listening to it after a year indoors, away from everyone I love, I think it might have aged even better by not coming out with the original.”

The band decided to cover their favourite Death Cab song thanks to the helps of the Patreon members which was set up during lockdown.  Each month they would do a poll for songs for the band to cover from their various locations across the US & this was one of the choices.

“Death Cab is a rare band that’s important to almost everyone in our band. I think we’re all envious of their talent and the way they’ve managed to build and sustain a career while doing their own thing. They’re definitely a top 5 band for me personally.” says singer Dylan Slocum.

Album Brave Faces Everyone which was released Winter 2020 was produced by guitarist Kyle McAulay at Howard Benson’s West Valley Recording, is steeped in the same detail-rich storytelling of Bruce Springsteen, The Menzingers and Manchester Orchestra.

Over the past six years, Spanish Love Songs have released two albums and an EP.  With Brave Faces Everyone, the songs are character stories set in small-town America and anxious urban jungles alike, unfurling heartbreaking tales of addiction, depression, debt and death juxtaposed alongside looming societal issues like mass shootings, the opioid epidemic and climate change. They’re all at once personal vignettes and universal truths of life in the 2010s, the lines blurred between Slocum’s own experiences and those of his friends and acquaintances. It seeks to find balance between realism and optimism.

“If you sing something loud enough and long enough,” Slocum muses, “hopefully people are able to find some peace in that.” Brave Faces Everyone experiments with more traditional song structures and fewer forwardly caustic moments this time around haven’t dulled the band’s sound. If anything, they’ve accentuated the most important parts of it. When everything is loud and urgent, nothing is. But when Slocum’s voice swells to a roar on this new record, the undeniable power grabs you by the collar and forces you to pay attention — and that’s the difference between simply being heard and truly being understood.