While covering The Men That Will Not Be Blamed For Nothing’s imminent second album, we’ve mentioned their role in a special steampunk event taking place in London next month. 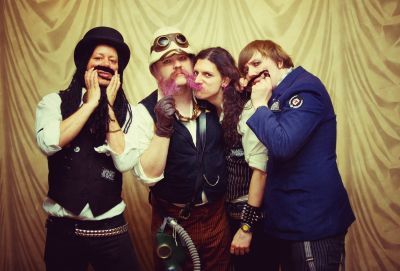 As well as marking the launch of ‘This May Be The Reason Why The Men That Will Not Be Blamed For Nothing Cannot Be Killed By Conventional Weapons’ with the band’s fusion of music and comedy; Sunday Driver, BB Blackdog and Stills take to the stage to provide the live sounds.

A multitude of music genres are catered for on the venue’s floor; The Hellfire Room offers up trad-goth and alternative anthems, The Hellhole is the focus for rock and metal, while Puref**kingindustrial is quite self-explanatory.

Aside from the music, there’s a serious element to a guest performer at Satan’s Strip Show.  One half of AntiChrist’s promotions team, Missy, is doing a Sponsored Strip to raise funds for a child to receive a life-enhancing vaccine.

The one-year-old boy has been turned down NHS treatment to help combat a condition which causes a respiratory lung infection, and Missy aims to reach a donation target of £2000 through her performance to allow the child to be vaccinated at a private clinic.  More details on this cause can be found here.