Returning with their first new music in 8 years, Stubborn Heart released their anticipated new album ‘Made Of Static’, via One Little Independent Records. 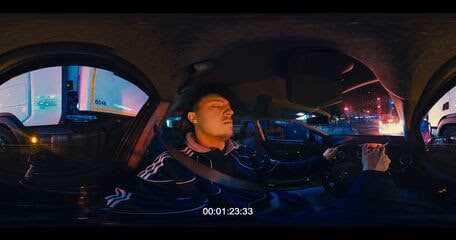 Murray explains; “The initial idea for the film came while being stuck in a taxi driving through central London. Even though the journey distance was short, the ride took just under two hours. Over time I ended up feeling this sense of claustrophobia and exhaustion from sitting in the same position. I had just received the track and so ended up listening to it on repeat until I was out of the car. The only thing I could really do in that situation was to look out the window and observe the outside world. I guess the film tries to portray some of the feelings I was having. With limited resources and not too long to produce the film, I needed to come up with ways to easily execute my ideas while also allowing flexibility in the edit. Shooting on a few 360 cameras allowed that flexibility while also providing some unique perspectives.”

Luca Santucci and Ben Fitzgerald, who have spent the last few years developing the ten brooding electro-soul tracks that make up the successor to their lauded 2012 self-titled debut, have once again struck a fine balance between ominous synth-soundscapes and introspective songwriting.

Balance is the key theme here. With Fitzgerald leading the production and manning the machines, the sound is rawer than on their previous album. Left-field pop with dark, icy edges, it finds a home somewhere in between r&b and cold wave. Santucci brings the heart and with it his aching, obsessive lyrics and a desire for something grittier in its presentation. The duo’s talents complement each other perfectly throughout.

Santucci has amassed an impressive list of writing and vocal credits in his time, with the likes of XL and Warp signee Leila Arab, Plaid, Riton and Soulwax amongst them. Fitzgerald has also been hard at work at his home studio programming various styles of music for artists and producers from around the world. As Stubborn Heart, they come armed with some serious experience and a wealth of influences. There’s an honest simplicity in the way they create, with lyrics written in an immediate, direct fashion with the aim to catch a feeling rather than emulate one.

Opener ‘Talking Gold’ pulsates with atmospheric yearning and electro beats while the likes of ‘Proves To Be’ and ‘Against The Tide’ follow it with dancefloor hooks and pensive vocals. Thoughtful yet menacing, there’s aggro in the words and music of ‘Points Of View’ and album highlight ‘Everything Matters’ creating an intense ambience with grinding mechanics. The futurist sound palette is explored further on welcome downbeat numbers ‘To Make You Happy’ and ‘Oh Stephanie’, allowing Stubborn Heart to relax into their laid-back, unsettling grooves. Closers ‘Drop The Ball’ and ‘Out Of My Hands’ extend their claustrophobic intentions, capping off an exquisitely composed, self-aware and emotive record.

On their first album Stubborn Heart garnered praise from the likes of Pitchfork, NME and the UK broadsheets. It was named album of 2012 at Gilles Peterson’s Worldwide Awards and Rough Trade placed it in their top 20 best albums the same year. However, it’s now that we’re presented with an album they feel better represents their dynamic – an album born from the duos combined creative static – as such, ‘Made Of Static’ is the first fruit of their reunion, aiming to step on from where they left off, and with the promise of much more to follow.